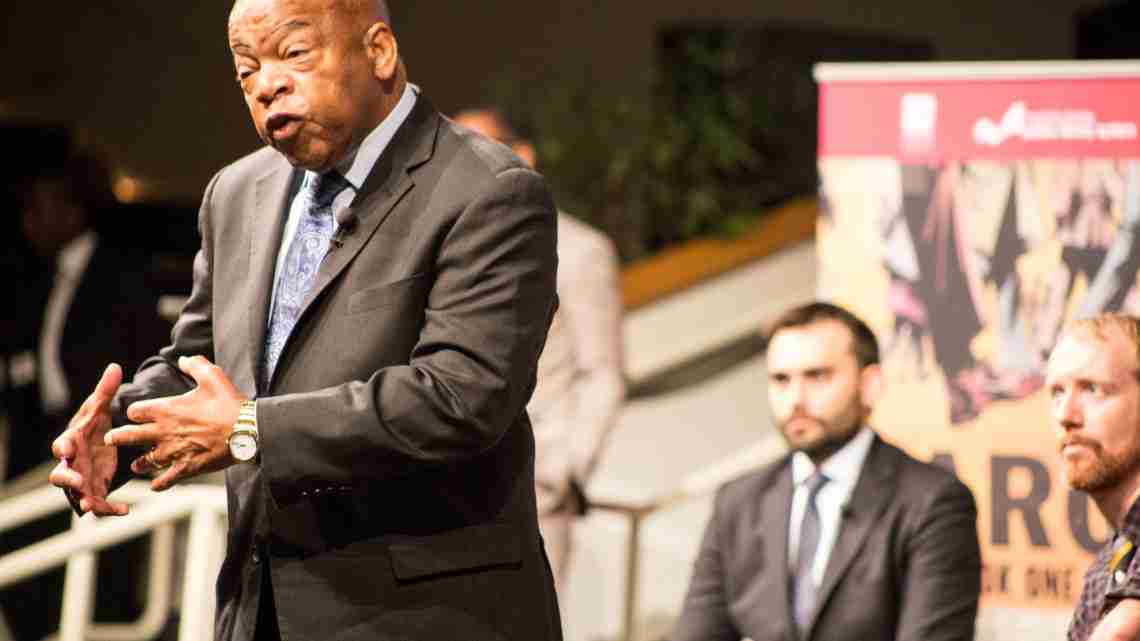 MIAMI – Over 1,200 Miami-Dade students got a first-hand history lesson from one of the most iconic living legends of the Civil Rights Movement on Saturday, April 1.

Congressman John Lewis, along with co-author Andrew Aydin and illustrator Nate Powell, spoke to a packed New Birth Church about their trilogy “March,” a collection of graphic novels that tell the history of civil rights from Lewis’ perspective.

Each student who attended the program received the trilogy courtesy of the Knight Foundation. Lewis, Aydin and Powell said they are using the series as a tool to help youth learn their history and inspire them to action.

“We’re seeing students all across the country who are reading ‘March,’ who are ingesting the message, taking it to heart and engaging in organizing,” Aydin said.

“This is to get them to read, but also students are organizing to learn how to engage in non-violent direct action,” Lewis said.

Mixing humor with his historical accounts, Lewis told the audience stories from his childhood, how he met Dr. Martin Luther King Jr., his work with the Student Nonviolent Coordinating Committee (SNCC) and more.

He said it was hard recalling the things he went through while writing “March” and it’s hard for people to read but “they have to face reality, face the truth.”

“To go back to the sit-ins and see what happened, say in a city like Nashville. You’re sitting at a lunch counter, someone come up and spit on you or put a lighted cigarette out in your hair or down your back, pour hot water, hot coffee, hot chocolate on you … you get arrested, taken to jail, but you’re beaten, you’re left bloody during the freedom rides … it’s sort of painful and it’s hard even for young people to believe that it happened,” Lewis said. 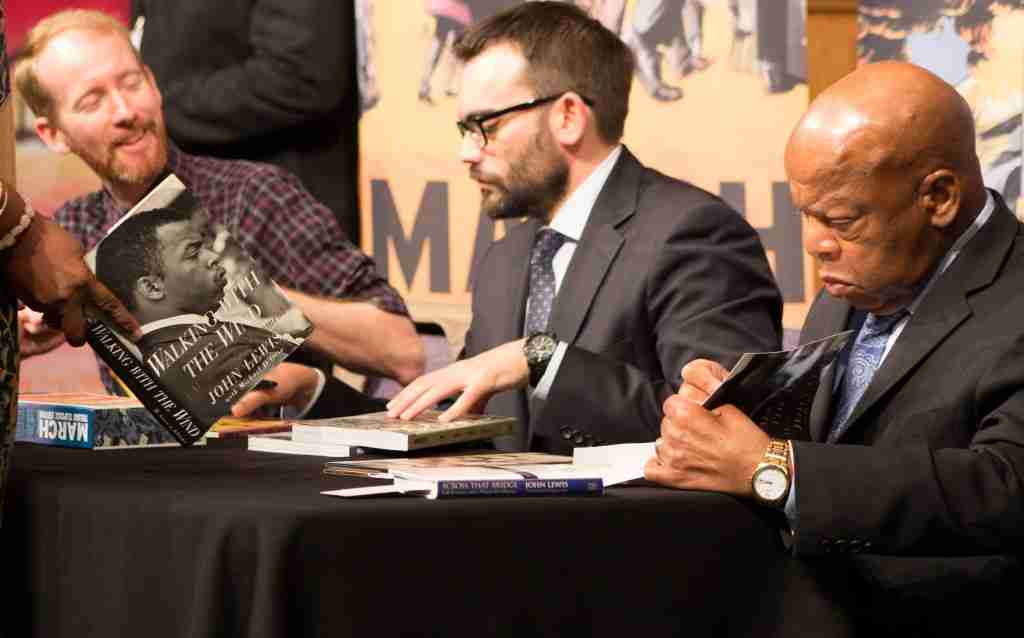 Aydin – whose father is a Muslim immigrant, but was raised by a single mother – said it is critical for today’s young people to mobilize, especially those from minority backgrounds.

After the trio finished speaking students lined the aisles to ask questions.

One student asked Lewis how he dealt with all the tragedies he faced in his life. Another asked him if he ever felt like giving up.

“We never gave up. We never lost hope. We never became bitter or hostile. We kept the faith. We kept our eyes on the prize,” Lewis said. “I’m not going to give up. I’m not going to give out. As long as one person or a group of individuals are being discriminated against. It doesn’t make sense for … people to be living in fear.”

The FMU chorale closed the program with the theme song of the Civil Rights Movement, “We Shall Overcome.” While singing, everyone crossed arms to join hands and sway from side to side, reminiscent of the marches in the 1950s and 1960s.

Students said they were compelled by Lewis’ story.

“Honestly I can’t choose one thing that he (Lewis) said because I feel like it was all so incredible.

The way he spoke really touched me,” said Gabriela Ortega, an eighth-grader at Palmetto Middle School.

“I felt that it was inspirational. It made me want to stand up,” said Dynasia Jean Charles, a seventh-grader at Aspira Arts Deco.

“The program was good. The thing that stood out most to me was when John Lewis went to jail 45 times for doing the right thing,” said Albert Jones, a fifth grader at Lenora B. Smith Elementary.

Lewis still finds some of his life experiences surreal.

“Seeing Nate draw and reading the words, I tell you it’s hard to believe that some of it really did happen and I was there,” Lewis said, noting how well Powell’s images captured the story. “It was so powerful I felt like crying. On the other hand, I kissed the page.”

Aydin said despite the ugliness of the times, Lewis wanted the entire story told.

“We tried to actually go beyond what was already on the record … The Congressman gave us a very specific and clear directive. Tell the whole story, make it clear and make it plain,” Aydin said.