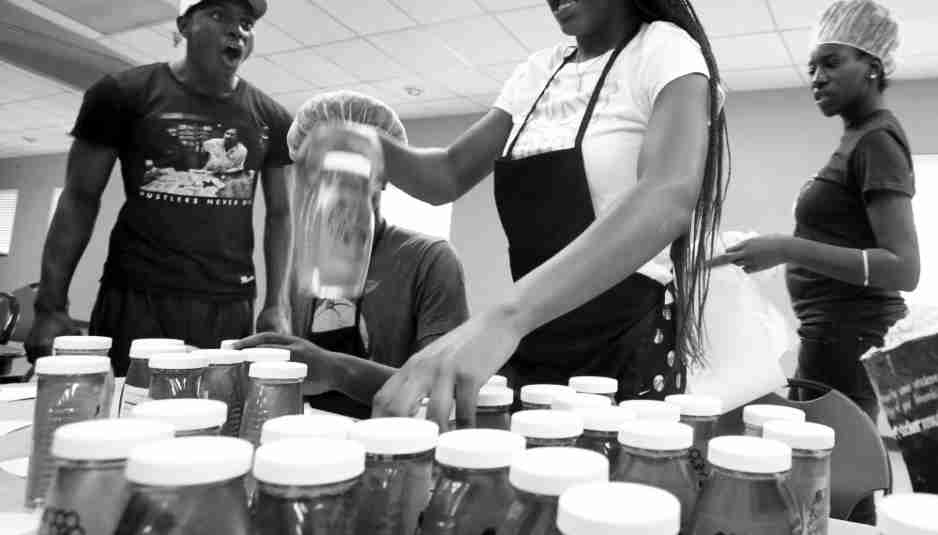 ORLANDO, Fla. (AP) At the first Parramore Farmer’s Market, Christopher Thornton,17, couldn’t believe how many customers were buying up jars of honey sold under a business he helped create.

By day’s end, Black Bee Honey, run by teenagers at the city’s Parramore Kidz Zone, had sold out of all four varieties of its sweet stuff and banked more than $2,000.

But the more he thought about it, he realized it would sell because “there’s no Publix, there’s no Wal-Mart, there’s no fresh food” in the neighborhood.

In the first seven weeks of the Parramore market outside Orlando City Stadium, $13 jars of Black Bee Honey have proven to be the best-selling product.

After their first windfall, the team of about 20 has averaged about $1,000 in sales each week and routinely sell out. The money is used to cover expenses, pay the teens minimum wage and support the Parramore Kidz Zone, a program run by the city to help youths in the low-income neighborhood.

Growing up in Parramore, Orlando’s highest poverty neighborhood, the children knew the need for healthy natural foods. Now as teens, they’re working to provide a nutritious replacement for sugars and artificial sweeteners in the community that has been labeled a “food desert.”

“Right now in our community, all that sells is fast food,”

When Reginald Burroughs, the program’s director of youth employment, came up with the idea for the college-bound teens to start the business, many of the youths were excited to test their skills.

They now hold three business meetings a week and also work on budgeting, sales and marketing.

Khristian Burke, 16, said the group settled on the Black Bee name because it “directly reflects how we feel as African American men and women in this social and political environment.”

On a recent Wednesday, more than a dozen teens donned gloves and hair nets as they transferred the thick honey from 5-gallon buckets to jars at the J.B. Callahan Neighborhood Center near the soccer stadium. The honey is harvested by Dadant & Sons in High Springs.

The city couldn’t give a jarby-jar breakdown of costs, but spokeswoman Jessica Garcia said the goal of the program is to break even.

City Commissioner Regina Hill, who represents the neighborhood, said the kids are learning to work as a team and have developed skills she hopes will lead to successful careers.

“They’re actually running a business,” said Hill, who favors the palmetto honey, which she puts in her tea and her grandson’s oatmeal.

Kidz Zone has been credited with reducing teen pregnancies and child abuse in the neighborhood, and over the past three years, every graduating senior in the program has gone to college.

Christopher, who also plays football for Oak Ridge, hopes to attend college to study computer engineering and one day start his own business.

By participating in Black Bee Honey, he’s learning the playbook to get a head start.

“I feel like this is helping me build my business skills,” Christopher said. “Once I get better at it, I can start my own business when I get older, I’ll actually know what I’m doing.”

And there are signs that their burgeoning business could grow. With Orlando City’s Major League Soccer season getting underway, city officials are hopeful it will boost attendance at the market and bring new customers to the neighborhood.

The young entrepreneurs want to see their honey on grocery store shelves and perhaps one day in a store of their own.

“I know the more work I put in, the more money I make. I don’t have guaranteed pay, so if I’m sitting at home talking about it . I’m promoting my business,” Christopher said. “:I know how we started from the bottom . we founded this business. All of us, as a team.”

Next post Drones delivering contraband to prisons a budding problem