Tutu speaks of passion and humanity 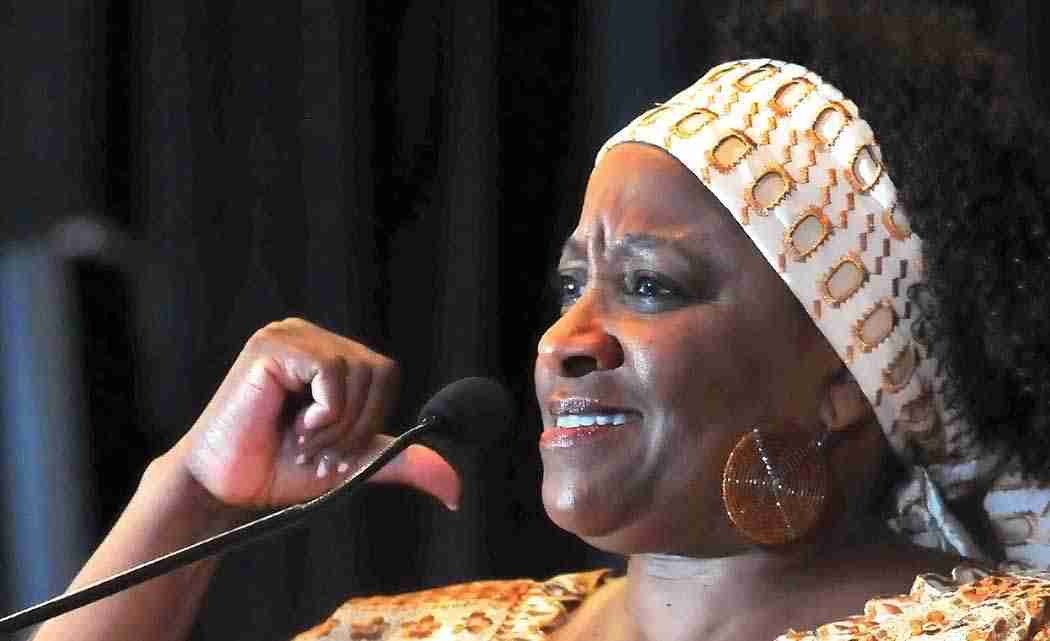 Just like her father, retired Archbishop Desmond Tutu, Nontombi Naomi Tutu speaks in a quiet tone. But also like her father, her words, while soft-spoken,  are those of great power and wisdom. Naomi Tutu captivated the audience February 20, when she delivered the keynote speech at the 14th Annual William M. Holland Scholarship Luncheon, presented by the F. Malcolm Cunningham Sr. Bar Association. The luncheon was held at  West Palm Beach’s Raymond F. Kravis Center for the Performing Arts.

Tutu’s message was one of shared community, shared humanity, and embracing difference. “Our differences are a part of the very gift that God has given us,” she cautioned the audience, in terms of accepting each other. She shared the poignant story of an ‘angry white man’ who was homeless and had attended one of her lectures. He challenged her repeatedly, and yes, he even annoyed her. He persisted with his rants, and she engaged him. Both seemed to relish the challenge.  He eventually asked her to join him for a cup of coffee to continue the dialogue. Reluctantly, she accepted. It had been the perfect opportunity to prejudge, stereotype and dismiss someone who clearly aggravated her. But instead, she obliged and met with him. One meeting turned into another, and another and another. Clearly, he challenged her very thoughts and, unbeknownst to her, she came to see something special in him. “If I had stayed in the knowledge of who he was, I would have missed the beautiful gifts he had,” she reflected.

Later, when he became homeless once again, she took him into her home for several months until he could regain his footing. Today, he is known as “Uncle Carl” to her family, and he is the one who encouraged her to attend divinity school. As a result, she is now pursuing a Master of Divinity at Vanderbilt University. It was a poignant lesson in acceptance and shared humanity – a lesson in not prejudging.

“Sometimes I am that angry black woman, but don’t decide that as soon as you see me,” she said, cautioning against stereotyping. “When I think about empowering and encouraging those who are coming up to lead – don’t let anyone tell you your race, gender, culture, the food you eat – tell you that you are less than a human being. Just know that you bring something into the conversation.”

Tutu also stressed the importance of helping each other. No one is meant to go the road alone. We all need each other – as in shared community, she repeatedly stated.  “When we look at leaders who’ve gone before….being questioned, challenged, cared for by family and mentors became central to who they became. A sense of community,” she pointed out. “If we want to be true leaders with a sense of community and humanity, I ask two things: Look at the crisis as a time to build bridges and find allies, and secondly, ‘A person is a person only through other people.’”

Each year, the F. Malcolm Cunningham Sr. Bar Association awards scholarships to third year law students who are preparing to take the Bar Examination. This year, the scholarship recipients acknowledged during the luncheon were: Dawn Boulding, Jalecia Coley and Paulinas Oraike.

Boulding is an evening student at Florida A&M University College of Law. She has worked full-time throughout her law school career while raising two daughters. She is currently the Family Court Manager for the 9th Judicial Circuit Court of Florida. She aspires to practice Family Law. She will graduate in May.

Coley also attends Florida A&M College of Law. Since third grade she has dreamed of becoming a lawyer. She is currently a law clerk at Bryant Miller Olive working in public finance. Upon graduation, she hopes to secure a job with the firm or clerk for a federal judge.

Oraike attends Florida Coastal School of Law in Jacksonville, Florida where he is among the top 10 percent in his class. He is a Dean’s scholar and member of the Honor Society. He also attended school in Poland as well as Nigeria, where he is from. He intends to practice law in Florida.

All three recipients were on hand to accept their awards.

Tutu also gave words of wisdom to high school students from Inlet Grove Community School in Riviera Beach. She cautioned them to find their passion and to find people who encouraged them and also those who challenged them. “If you have that combination, you’ll have success,” she told them.