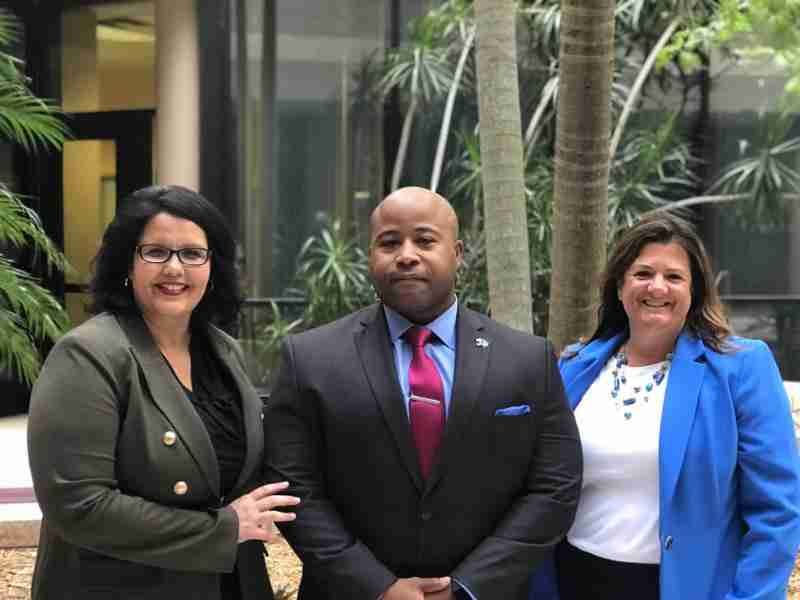 WEST PALM BEACH, Fla. – As the school year inches towards its end, three new principals have been named to West Palm Beach schools and are gearing up for the summer and fall semesters. At the school board meeting on May 9, Shari Bremekamp was introduced as principal of Hidden Oaks Elementary School, Corey Brooks as principal of William T. Dwyer High School, and Eli Morales as principal at Okeeheelee Middle School.

As the former principal at Cypress Trails Elementary, Bremekamp was excited at the prospect of leading Hidden Oaks, the District’s first K-8 STEAM school (Science, Technology, Engineering, Arts, and Math) She enthusiastically told the School Board that “it will be my mission to motivate, encourage, inspire, and drive towards continuous academic improvement and to the social emotional well-being of all of our children.”

Brooks had been the principal at John F. Kennedy Middle for nine years, a school he attended as a student years ago. Brooks is the son of an educator, mentioning that his mother has been a teacher for 38 years, 28 of which have been in Palm Beach County.

He shared some words of wisdom from his mother, that “you have the best job in the world, you get to shape, and manage, and just do wonderful things for kids and for staff.” In that spirit, Brooks pledged that “I will do my best as a servant leader.”

Morales takes over at Okeeheelee Middle, moving from her previous position as the principal at Highland Elementary. At the Board Meeting, she credited her parents who emigrated to the U.S., stating that she stands on their shoulders, and her success is due to their sacrifice. “This journey isn’t about me, it’s about the children of Palm Beach County,” she said. “I take this position to heart, I’m so excited to have this opportunity.”