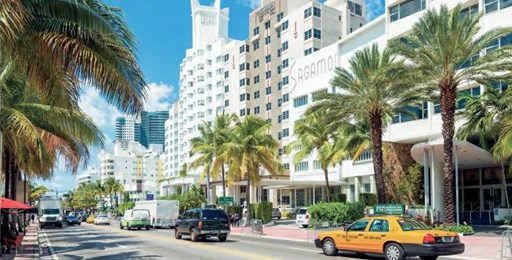 MIAMI BEACH, Fla. (AP) In apartment 9A of a twostory 1920s Miami Beach building, a sunburned couple from Charlotte was staying the weekend after booking the apartment on Hotels.com. In 6A, three generations of women from Argentina were visiting via Despegar.com. In 4B, two young women from Amsterdam were celebrating a 21st birthday; they found the listing on Booking.com. In 9B, a young woman from Colombia insisted she had rented the place from a friend for the long weekend.

The apartment building 1518 Drexel Ave. – is in an area of the city where shortterm rentals of six months or less are illegal. Yet two years after the city enacted steep fines to prevent owners from renting apartments to tourists – $20,000 for the first violation, $40,000 for the second, and so on – a thriving short-term rental market persists.

The city’s fines have been enough to deter some owners and to scare others who said they were unaware that their tenants were subletting short term. But still others, like the owners of some of the units at 1518 Drexel, continue to rack up hundreds of thousands of dollars in fines – and the city often can’t collect them.

Dressed in her code compliance uniform with a body camera on her chest, Vijma Maharaj spotted Michael Simmer, 54, approaching the front door of 1518 Drexel Ave. on the evening of Feb.

22. Her office, Miami Beach code compliance, constantly receives complaints that people staying in the building are tourists, not tenants, but city inspectors are rarely able to get inside.

Simmer, from Charlotte, explained how he and his wife paid $600 for a three night stay at a different apartment building – 1619 Jefferson Ave. – and were directed to go to a “welcome center” at a hostel at 236 Ninth St. when they arrived from the airport.

There, he said, someone told them the apartment they booked had a plumbing problem so they would be staying at 1518 Drexel Ave. Apt. 9A instead, which was not nearly as nice as the apartment they’d been promised. Simmer spent his first day of vacation fighting with Hotels.com, which eventually offered him a refund.

After collecting evidence – Simmer’s booking confirmation, photos of the sign on the wall with the Wi-Fi password for guests – Maharaj spotted lock boxes on three more apartments, a telltale sign of short-term rentals, she said.

A grandmother in 6A said that she, her daughter and her granddaughter were staying for nine nights. Upstairs, the two young women from Amsterdam said they paid $1,029 for a week at 1512 Washington Ave. on Booking.com, but were rerouted to the Drexel apartment through the same hostel Simmer was directed to. Across the hall, the young woman from Colombia insisted that she was staying at a friend’s apartment for the long weekend. Maharaj called the “friend,” and it quickly became clear the two did not know each other.

Maharaj issued violations to the owners of apartments 9A and 4B. It wasn’t the first time.

Miami Beach code compliance has issued 17 violations to 13 units at 1518 Drexel Ave. over the past two years, including apartments 9A and 4B. Property records show that units 9A and 4B are owned by a company called Sweet House 2016 Inc., which has been fined a total of $420,000 for violating the city’s short-term rental laws, according to city records. The company’s president and vice president, Alessandro Zara and Michele Santinato, appear to live in Italy and could not be reached for comment.

Cities across the U.S. are battling illegal short-term rentals, which they argue negatively impact the quality of life for homeowners and renters living next door. Miami Beach has some of the most aggressive short-term rental policies in the country. Over the past five years, the number of short-term rental investigations has nearly tripled, from roughly 600 during the 201314 fiscal year to more than 1,700 last year. Short-term rentals of six months or less are prohibited in most residential areas. In addition to the hefty fines, repeat offenders can lose their certificate of occupancy or get their water and electricity cut off.

And that’s not all. The city reports owners to the county, which can revoke their homestead tax exemption.

Short-term rentals have been illegal in Miami Beach for years, but the fines started out small. In March 2016, the city raised them to $20,000. Since then, Miami Beach’s code compliance department has issued 431 violations and levied nearly $8 million in fines. Although city law allows code compliance to fine property managers, real estate brokers and tenants illegally subletting their apartments, the vast majority of the violations have gone to property owners. That’s because it’s nearly impossible for the city to enforce fines against tenants unless the tenant operates a business or owns property elsewhere in Miami Beach.

It’s not always easy to enforce fines against homeowners, either.

The city initially levied $13.3 million in fines for the 431 violations, but some property owners have successfully appealed or negotiated a lower payment with the city attorney’s office. By early February, the city had been able to collect only $463,000 of the nearly $8 million in fines, which amounts to just 6 percent. Miami Beach expects to collect the outstanding fines through liens placed on the properties, which prevent owners from selling or refinancing their homes until they’ve paid up.

Not everyone agrees with the city’s tactics. Some owners argue they have the right to operate a low-key business out of their home. Short-term rentals also generate a lot of tax revenue. Airbnb hosts paid more than $10 million in taxes to Miami-Dade County in 2018.

When code compliance officers come across an illegal rental, they typically make the visitors leave the property unless they’re elderly or families with children. Officers instruct the renters to call the host so the host can find them new accommodations. Maharaj decided to let the tourists at 1518 Drexel stay through the weekend because they weren’t disturbing the neighbors and they only had a few days left.