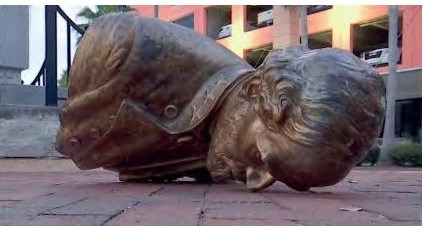 The News-Press reports that the bust of Lee’s head and upper torso was found Tuesday morning lying on the ground in front of the pedestal in downtown Fort Myers, where it has stood for the past half-century.

Fort Myers police and members of the Sons of Confederate Veterans responded to the scene of the toppled monument. The bust was taken away by a member of the SCV.

The Lee bust has generated controversy in recent years. Some see it as symbol of racism while others consider it part of their Southern heritage.

Fort Myers is the county seat of Lee County, which was founded in 1887 and named after the Confederate general.