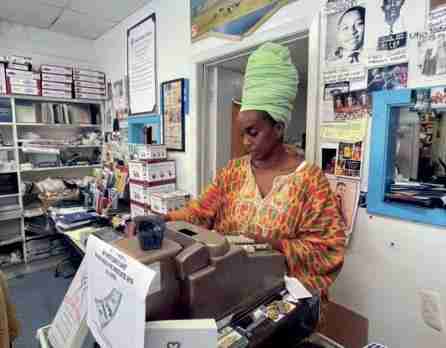 Jackson, Miss. (AP) – When John Tierre launched his restaurant in Jackson’s neglected Farish Street Historic District, he was drawn by the neighborhood’s past as an economically independent cultural hub for Black Mississippians, and the prospect of helping usher in an era of renewed prosperity.

This week he sat on the empty, sun-drenched patio of Johnny T’s Bistro and Blues and lamented all the business he has lost as tainted water flows through his pipes – just like other users in the majority Black city of 150,000, if they were lucky enough to have any pressure at all. The revival he and others envisioned seems very much in doubt.

“The numbers are very low for lunch,” Tierre told The Associated Press. “They’re probably taking their business to the outskirts where they don’t have water woes.”

Torrential rains and flooding of the Pearl River in late August exacerbated problems at one of Jackson’s two treatment plants, leading to a drop in pressure throughout the city, where residents were already under a boil-water order due to poor quality.

Ofﬁcials said Sunday that most of Jackson should have running water, though residents are still advised not to drink straight from the tap. The city remains under a boil water notice. Ofﬁcials also said future repairs leave potential for fluctuations in water pressure.

The water crisis has compounded the ﬁnancial strain caused by an ongoing labor shortage and high inflation. And the flow of consumer dollars from Jackson and its crumbling infrastructure to the city’s outskirts hits Black-owned businesses hardest, the owners say.

Another Black entrepreneur who has taken a hit is Bobbie Fairley, 59, who has lived in Jackson her entire life and owns Magic Hands Hair Design on the city’s south side.

She canceled ﬁve appointments Wednesday because she needs high water pressure to rinse her clients’ hair of treatment chemicals. She also has had to purchase water to shampoo hair to try ﬁt and in whatever appointments she can. When customers aren’t coming in, she’s losing money.

Jackson can’t afford to ﬁx its water problems. The tax base has eroded over the past few decades as the population decreased, the result of primarily white flight to suburbs that began about a decade after public schools integrated in 1970. Today the city is more than 80% black, and 25% of its residents live in poverty.

Some say the uncertainty facing Black businesses ﬁts into a pattern of adversity stemming from both natural disasters and policy decisions.

“It’s punishment for Jackson because it was open to the idea that people should be able to attend public schools and that people should have access to public areas without abuse,” said Maati Jone Primm, who owns Marshall’s Music and Bookstore up the block from Johnny T’s. “As a result of that, we have people who ran away to the suburbs.” Primm thinks Jackson’s longstanding water woes _ which some trace to the 1970s when federal spending on water utilities peaked, according to a 2018 Congressional Budget Ofﬁce report _ have been made worse by inaction from Mississippi’s mostly white, conservative dominated Legislature.

“For decades this has been a malignant attack, not benign. And it’s been purposeful,” Primm said.

Political leaders have not always been on the same page. Jackson’s Democratic mayor, Chokwe Antar Lumumba, has blamed the water problems on decades of deferred maintenance, while Republican Gov. Tate Reeves has said they stem from mismanagement at the city level.

Last Monday the governor held a news conference about the crisis, and the mayor was not invited. Another was held later in the week where they both appeared, but Primm said it’s clear that the two are not in concert.

“The lack of cooperation speaks to the continued punishment that Jackson must endure,” she said.

Under normal circumstances, Labor Day weekend is a bustling time at Johnny T’s. The college football season brings out devoted Jackson State fans who watch away games on the bistro’s TVs or mosey over from the stadium after home games. But this weekend many regulars were busy stocking up on bottled water to drink or boiling tap water to cook.

Even as revenue plummeted, Tierre’s expenses increased. He has been spending $300 to $500 per day on ice and bottled water, not to mention canned soft drinks, tonic water and everything else that would typically be served out of a soda gun. He brings staff in a few hours earlier than usual so they can get a head start on boiling water to wash dishes and stacking the extra soda cans.

In total, Tierre estimated, he’s forking over an added $3,500 per week. Customers pay the price.

“You have to pass some of this off to the consumer,” Tierre said. “Now your Coke is $3, and there are no reﬁlls.” At a water distribution site in south Jackson this week, area resident Lisa Jones brought empty paint buckets to ﬁll up so her family could bathe. In a city with crumbling infrastructure, Jones said she felt trapped.

“Everybody can’t move right now. Everyone can’t go to Madison, Flowood, Canton and all these other places,” she said, naming three more affluent suburbs. “If we could, trust me, it would be a dark sight: Houses would be boarded up street by street, neighborhood by neighborhood.”