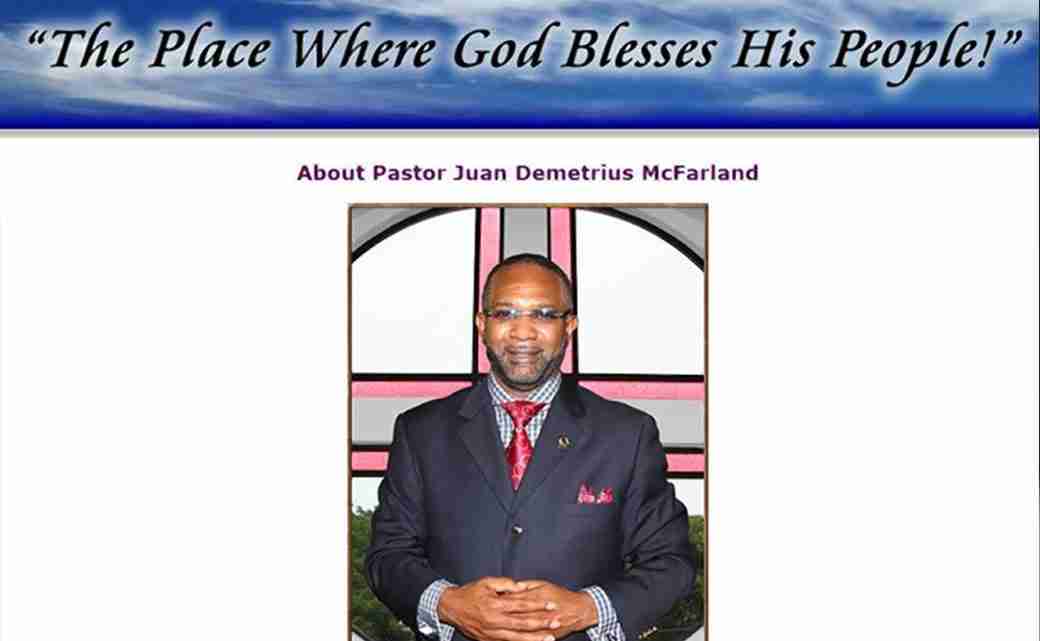 BY PHILLIP RAWLS AND JAY REEVES

MONTGOMERY, Ala. (AP) — The Rev. Juan D. McFarland is described as a man of “passion, prayer and purpose” in a three-paragraph summary on the website of the Shiloh Missionary Baptist Church. The site concludes by saying such an overview “does not begin to tell his story.”

Parishioners realized just how true that was in recent weeks, when McFarland dropped the bombshells: He had had affairs with several women in the parish – inside the church – but neglected to tell them he had AIDS.

“It was surprise, shock, but I think the leadership team did not react wanting to get him out. We wanted to get him help,” said James Long, vice chairman of the board of trustees.

McFarland refused – and in a later sermon dropped another bombshell: He had been abusing drugs.

That was enough. A church document shows members voted 80-1 to fire him on Oct. 5, but McFarland refused to leave, going so far as to change the building’s locks and the numbers of the church’s bank account before returning to the pulpit on Oct. 12, Long said.

On Tuesday, the first business day following his last appearance, the deacons announced that they had filed a lawsuit to force McFarland out.

Supporters of the pastor say they plan a news conference Thursday to respond to the lawsuit and allegations surrounding McFarland.

In contrast to the website’s glowing portrayal of McFarland, the suit accuses him of “debauchery, sinfulness, hedonism, sexual misconduct, dishonesty, thievery and rejection of the Ten Commandments.”

McFarland, 47, has not been charged with any wrongdoing. Knowingly spreading a sexually transmitted disease is a misdemeanor in Alabama punishable by up to a year in jail.

The lawsuit asks a judge to block him from serving as minister and give them control of the church complex, its bank accounts and a Mercedes Benz furnished for the pastor’s use.

“We are just trying to minister to the flock and get the church back in order,” Long said.

McFarland remained unfazed by the news.

“I will command the pulpit from this day forward,” he said in a brief telephone interview Tuesday. He declined further comment, saying he and his attorney needed more time to review the suit. He would not disclose his attorney’s name.

In a related development, Wells Fargo Bank filed court papers on Tuesday saying that because McFarland sought to change control of the church’s bank account, it can’t determine who has the rightful claim to $56,211 in the account. It sent the court a check for the full amount and asked to be relieved of responsibility.

Nathan Williams, chairman of the board of deacons, said the church normally has about 170 members show up each Sunday.

Only about 50 heard McFarland’s most recent sermon. Williams and other church leaders said they went elsewhere to avoid any confrontation.

In the sermon, McFarland recounted stories from the books of Matthew and Luke about Jesus healing people.

“Sometimes the worst times in our lives is when we have a midnight situation – and we are in a midnight situation,” he said. “When you pray, you’ve got to forgive. You can’t go down on your knees hating somebody, or wishing something bad will happen to somebody.”

An attorney for the church leaders said the sermons need to end. “He needs to get the message that he needs to be gone,” attorney Julian McPhillips said.

Court records show McFarland had two marriages end in divorce after wives filed suit to end the unions. Neither complaint mentioned allegations of adultery or other wrongdoing.

Shiloh Missionary Baptist Church was founded in 1919. McFarland became pastor in 1990, and the church built a new complex near Alabama State University in 1993.