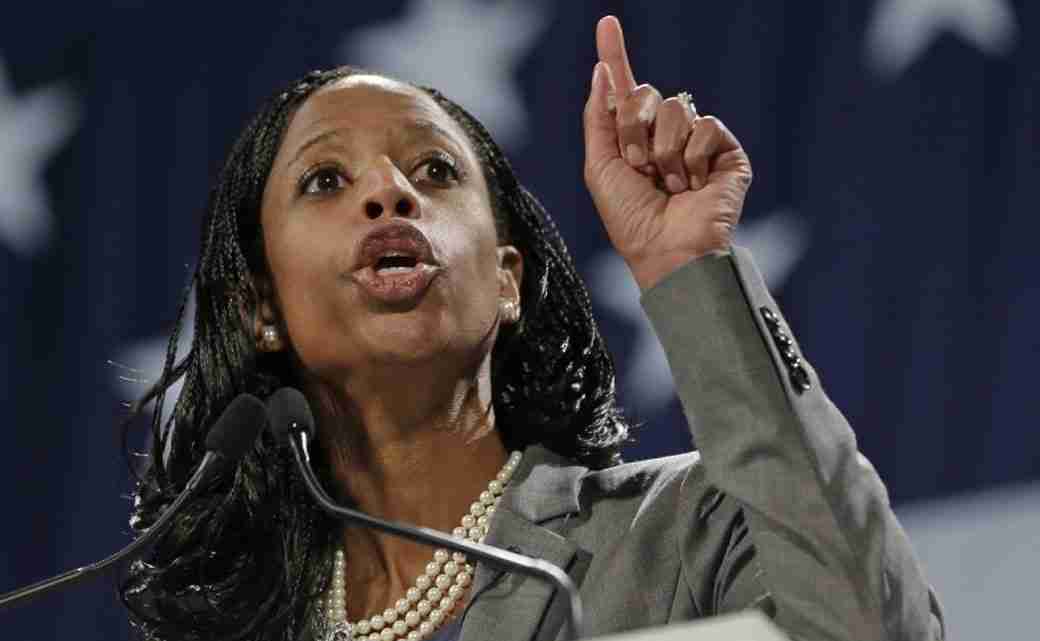 WASHINGTON (AP) – More than 100 black candidates will be on the ballot in statewide and congressional races next month, a post-Reconstruction record that some observers say is a byproduct of President Barack Obama’s historic presidency.

At least 83 black Republicans and Democrats are running for the U.S. House, an all-time high for the modern era, according to political scientist David Bositis, who has tracked black politicians for years. They include Mia Love in Utah, who is trying to become the first black Republican woman to be elected to Congress.

Four other black women – Bonnie Watson Coleman in New Jersey, Brenda Lawrence in Michigan, Alma Adams in North Carolina and Stacey Plaskett in the Virgin Islands – are expected to win seats as Democrats, Bositis said. If they all win, and no black female incumbents lose, there should be 20 black women among House members, an all-time high, Bositis said.

There are at least 25 African-Americans running for statewide offices, including U.S. senator, governor or lieutenant governor, also a record number.

The previous record for black candidates seeking House seats was 72 in 2012, the year Obama, the nation’s first black president, was re-elected to a second term. The previous record for statewide contests was 17 in 2002, said Bositis, formerly of the Joint Center for Political and Economic Studies, a think tank in Washington that focuses primarily on issues affecting African-Americans.

Those statewide numbers include Democrat Cory Booker of New Jersey and Republican Tim Scott of South Carolina, the U.S. Senate’s only black members.

Booker is seeking a full term next month, having won a special election last year to replace the deceased Sen. Frank Lautenberg. Scott, appointed last year, is seeking to finish out the two years remaining in the term of former Sen. Jim DeMint, who resigned from the Senate in 2013.

An Obama “coattails effect” is partly responsible for this large candidate pool because it spurred blacks to vote, and encouraged them to pursue offices they might not have sought in the past, said political science professor Fredrick C. Harris, director of Columbia University’s Center on African-American Politics and Society. America’s blacks voted at a higher rate than other minority groups in 2012 and by most measures surpassed the white turnout for the first time, according to the U.S. Census Bureau.

“It may be that this is a reflection of political opportunity,” Harris said. He noted a similar increase in black candidacies in 1988, when Jesse Jackson made a second, unsuccessful run for the Democratic presidential nomination.

Bositis said the increase may also be a result of changing political demographics in regions like the South. “The fact is that many of the increases are occurring in states (especially in the South) where most whites are withdrawing from Democratic Party politics – leaving black candidates the nominations by default,” Bositis said.

Republicans have been heavily courting minorities, spending millions to woo black voters and to recruit women and minorities to run for state and local office. “If elected, these candidates will be great representatives for all their constituents and will continue to play a major role in the party’s efforts to expand the electorate,” said Republican National Committee spokesman Orlando Brown.

While the GOP is building up its numbers, the Democrats have a record number of African-Americans running for statewide and congressional offices, according to Bositis. There are at least 65 Democratic nominees, surpassing the previous high of 59 in 2012.

“The historic number of black Democrats running for office at all levels this year once again confirms that the Democratic Party is a broad coalition of Americans from diverse ethnic and professional backgrounds, focused on expanding opportunity for all and building ladders to the middle class,” said Kiara Pesante, Democratic National Committee spokeswoman.

Next post BAPTIST PASTOR SUED AFTER REVELATION OF AFFAIRS