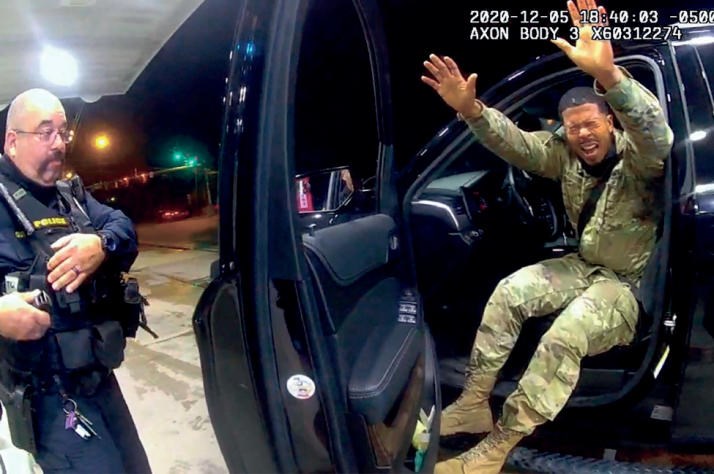 WINDSOR, Va. – Two police ofﬁcers have come under ﬁre after a video emerged showing them manhandle a black army second lieutenant at gunpoint during a trafﬁc stop.

The incident that took place in Windsor, Virginia, on Dec. 5, left the army ofﬁcer, identiﬁed as Caron Nazario, confused and fearing for his life. He held his hands outside his car window as he tried to reason with the ofﬁcers, who were clearly not willing to hear him out.

Reports revealed that the ofﬁcers stopped him because his car didn’t have a permanent rear license plate.

When he told the ofﬁcers that he was afraid to get out of his car, one ofﬁcer replied, “Yeah, you should be!” The ofﬁcers carefully moved closer to Nazario and continued to order him out of the car. Realizing that he wasn’t acting as fast as they wanted, they proceeded to pepper spray him before striking and handcufﬁng him.

In a lawsuit ﬁled by the 27-year-old lieutenant, he says the police used slang term giving the impression that he’d be executed. The complaint further states that the ofﬁcers warned Nazario not to talk about the incident lest he loses his military career.

“I’m serving this country, and this is how I’m treated?” Nazario says in a video from one of the body-cam videos.

Nazario, a Black-Latino, has ﬁled a lawsuit against the two ofﬁcers identiﬁed as Joe Gutierrez and Daniel Crocker. In his lawsuit, he alleges use of excessive force, which he claims was a result of racial proﬁling. Nazario is asking the court to award him $1 million in damages and to rule that the two ofﬁcers infringed on his constitutional rights spelt out in the Fourth Amendment.

Gutierrez and Crooker were still serving with the de partment. Gutierrez has since been ﬁred.