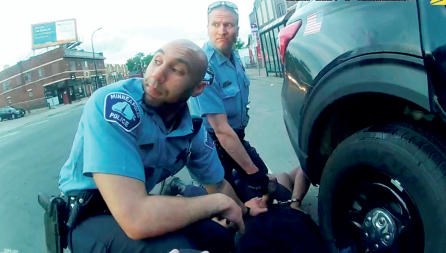 Chauvin tells his sergeant he had to kneel on Floyd’s neck because the man looked scary and maybe he had a weapon. The police department treats Chauvin like the victim and keeps his name secret.

Chauvin holsters his pistol and slips back into his job. Records of the incident and aftermath can’t be found without a name.

None of that is unimaginable in the wake of a new ruling from a Tallahassee appellate court.

Last week the First District Court of Appeal decided that a 2018 victims’ privacy law applies to police ofﬁcers. If the Florida Supreme Court reviews the opinion and agrees, an expanded version of “Marsy’s Law” will prevail statewide.

‘Chauvin is Exhibit A’

Then trial court judges will know exactly what to do when media companies sue for police names under public records laws: rule against the media and for law-enforcement “victims.”

The implications are deeply concerning to press freedom watchdogs and media-friendly lawyers.

“Derek Chauvin is Exhibit A,” said Frank LoMonte. He’s director of the Brechner Center for Freedom of Information at the University of Florida, which signed onto a brief in the 1st DCA case, Florida Police Benevolent Association, John Doe 1 and John Doe 2 vs. City of Tallahassee.

“The reason that we know Chauvin has 18 prior complaints on his record, none of which results in his losing his job, is because his name was public record,” LoMonte said. ‘If we don’t know the names of the ofﬁcers, then we don’t know whether the shooting [or other deadly force] was a one-time aberration or part of a pattern of behavior.”

Police have frightening encounters “but you need to expect there’s going to be public scrutiny of your actions. It’s just a choice that police ofﬁcers have always been asked to make,” media lawyer Tom Julin said. (Disclosure: Julin represents Florida Bull. dog.)

“The concern and the fear is that this decision will be used broadly to allow law enforcement ofﬁcers who are involved in controversies to stay out of the public limelight,” he said.

Former 1st DCA judge Philip Padovano, who represented Tallahassee in the appeal and lost, criticized the ruling for lopsided reasoning.

“On the one hand you have Marsy’s Law, but you also have very strong provisions about public disclosure of the government’s business. Marsy’s Law didn’t trump those things.”

“I’d hoped that they would have tried to balance these competing interests, but it was all one side, the police department,” he said of the court where he served for 19 years before retiring in 2015 and joining a law ﬁrm.

The victims’ privacy law honors Marsalee “Marsy” Ann Nicholas, a student at the University of California, Santa Barbara, who in 1983 was stalked and fatally shot by her ex-boyfriend.

While he was out on bail, he found and terrorized Nicholas’s mother in a grocery store after the funeral for her 21year-old daughter. He was convicted of second-degree murder.

Nicholas’s brother Henry Nicholas, a tech mogul, worked for many years to put a crime victims’ bill of rights amendment on the California ballot. It passed in 2008.

Then Nicholas spent more than $100 million to advocate for similar amendments in other states. To date he’s had a dozen successes with his campaign, Marsy’s Law For All.

In Florida, 61 percent of voters approved adding the provision to the state Constitution in 2018. The theory behind the privacy part is that if victims and their families aren’t identiﬁed, they can’t be targeted for harassment.

A supporter, state Sen. Lauren Book, DPlantation, underlined the law’s mission. “The goal was to protect victims of crimes — period, the end,” she told USA Today and ProPublica for a story they published in October.

But as the story documents, police departments throughout Florida have coopted victim privacy protection for themselves.

“Ofﬁcers sustained no injuries in at least half of the incidents for which they claimed victims’ rights, records show,” the story says. “Even minor movements that ofﬁcers perceived as threatening, such as walking aggressively or reaching into a pocket, qualiﬁed as batteries on ofﬁcers — triggering the law’s protection, according to the agencies.”

Matt Puckett, executive director of the Florida Police Benevolent Association, the statewide police union, recognized the need to set limits. “It’s not hard to see a circumstance where you would go, ‘OK, that probably seems like not a fair use of the law,’ ” the story quotes him as saying.

Last May a Tallahassee police ofﬁcer fatally shot Tony McDade, a black transgender man who allegedly pointed a gun at an ofﬁcer while he was responding to a reported knife attack.

This third police-involved shooting in three months ignited protests in the streets. When the city seemed poised to release the names of police in the McDade shooting and one other, the police union went to court.

The PBA asked Leon Circuit Judge Charles Dodson to issue this declaration: Marsy’s Law protects ofﬁcers from exposure to the harassment that publicizing their names or any other identifying information might incite.