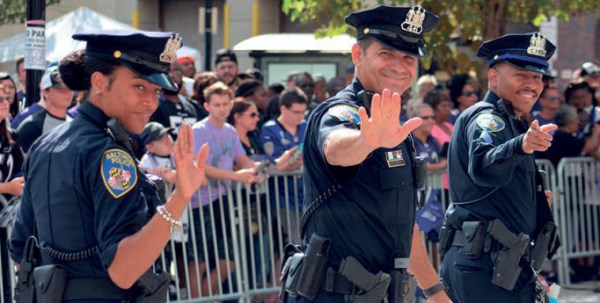 BALTIMORE, MD – In a move that surprised many, and stunned others, Maryland legislators passed House Bill 670, the Police Reform and Accountability Act of 2021, effectively repealing the oldest law of its kind, the Law Enforcement Ofﬁcers’ Bill of Rights, and jumpstarting the push for police reform. The ﬁrst law and prototype for other states to follow, the Law Enforcement Ofﬁcers’ Bill of Rights was established in 1974 to “guarantee certain procedural safeguards to law enforcement ofﬁcers during any investigation or interrogation or subsequent hearing that could lead to disciplinary action, demotion or dismissal.” Maryland’s Law Enforcement Ofﬁcers’ Bill of Rights was copied by 14 other states including Delaware, Kentucky, California, Minnesota, Rhode Island, and Florida. Since the tragic murder of George Floyd last spring, and the ensuing protests across the country, there has been a swift call to reform local police departments or to simply defund them. However, police reformation starts with the document that blocks such a concept from occurring.

One of the more questionable aspects of the Maryland Law Enforcement Ofﬁcers’ Bill of Rights is that police ofﬁcers accused of misconduct receive a “cooling off period” of ﬁve days before an ofﬁcial investigation and interrogation instigates. The accused police ofﬁcer has a right to be informed of all complainants’ names and allegations before interrogation. Police ofﬁcers can also not be “criminally indicted” or “administratively” punished for the usage of potentially lethal force if they can successfully argue that they “thought” their life was in imminent danger. What makes Maryland’s Law Enforcement Ofﬁcers’ Bill of Rights even more concerning is the way it shields police ofﬁcers who are found guilty of misconduct or have complaints ﬁled against them. These protected police ofﬁcers could expect “scrubbed records of complaints…after a certain period of time.” This creates a revolving door within the ranks of local police that recycles bad police ofﬁcers from one department to another, from one precinct to another. From one city to the next without even a warning to the community at large.

Maryland recently had a situation that presents the perfect example of why there is a need for police reform, and a complete overhaul of the Law Enforcement Officers’ Bill of Rights. In 2018, Baltimore police officer Richard Pinheiro, was seen on his body camera planting drugs in a vacant lot and then officially reporting that he “discovered” it. After being convicted for “fabricating evidence” and “misconduct in office,” three years later Pinheiro is still a Baltimore police officer, working a desk job, and receiving a salary. Why? His case is tied up in a tangle of investigation and red tape due to the Law Enforcement Officers’ Bill of Rights which is why the Maryland legislator decided to move towards repealing the law collectively and decisively. In Rhode Island, a police officer can be convicted of a crime in civilian criminal court and keep their job, where a convicted felon is not allowed to carry a firearm. It is the Law Enforcement Officers’ Bill of Rights that provides the safe ‘haven’ for police officers who cross the proverbial line into misconduct and criminal behavior and critics have maintained that such a ‘haven’ is counterproductive to good policing.

Maryland Gov. Larry Hogan, Republican, vetoed the Police Reform and Accountability Act of 2021 which replaces the former Law Enforcement Officers’ Bill of Rights stating that the four-part bill would cause “great damage to police recruitment and retention.” Hogan informed Democratic legislators that they were “overtaken by political agendas that do not serve the public safety interests of the citizens of Maryland.” Democrats like Sen. Charles Sydnor, who sponsored one of the bills, overruled Hogan’s veto, essentially and radically initiating police reform in Maryland that has been long overdue. “Last year, I attended and participated in multiple demonstrations of people demanding change — the young and the old, people of all races and walks of life,” Sydnor told reporters. “With so many situations being thrust before our eyes, we could no longer deny what we see, and I thank my colleagues for believing their eyes and listening to the majority of Marylanders.”

The Police Reform and Accountability Act of 2021 for the first time provides civilians with a substantial role in how the police disciplinary process is established, restricts “no-knock’’ warrants, requires body cameras, prohibits police officers from preventing the recording of them carrying out their duties among civilians, and bans life sentences without the possibility of parole for juvenile offenders. The Police Reform and Accountability Act of 2021 also creates a statewide use of force policy. Force can only be used to “prevent an imminent threat of physical injury.” Force “should be necessary and proportional.” Any police officer who causes injury or death can be convicted and receive a prison sentence of up to 10 years. Maryland police unions claim that the newly passed police reform bills are drastic in scope. Angelo Consoli of the Maryland Fraternal Order of Police remarked that lawmakers “are going to make it tougher for the police to police.”

Yet, considering the recent police shooting death of 20-year-old Daunte Wright in a Minneapolis suburb, and the video that has surfaced of a Virginia police officer pepper-spraying an Army lieutenant in another traffic stop gone horribly wrong, it is evident that police reform and accountability must happen. Maryland is leading the way.