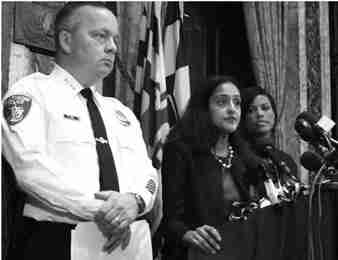 The latest example came in Baltimore, where a critical report on that department’s policies found that officers end up in unnecessarily violent confrontations with mentally disabled people who in many instances haven’t even committed crimes. The report cited instances of officers using a stun gun to subdue an agitated man who refused to leave a vacant building and of spraying mace to force a troubled person – said by his father to be unarmed and off his medications – out of an apartment.

Though past federal investigations have addressed the problem, the Baltimore report went a step further: It was the first time the Justice Department has explicitly found that a police department’s policies violated the Americans with Disabilities Act. The finding is intended to chart a path to what federal officials hope will be farreaching improvements, including better training for dispatchers and officers, diversion of more people to treatment rather than jail and stronger relationships with mental health specialists. “Through the course of our work in the last several years on this bucket of issues, we’ve seen how important it is to get at the mental health issues as early in the system as possible,” Vanita Gupta, head of the department’s Civil Rights Division, said in an interview.

Civil rights officials say the Baltimore re- port builds on work they’ve done in investigating the treatment of the mentally ill in various settings. In Mississippi, the Hinds County Jail in June recently agreed to better screening for mental illness and to provide individualized treatment for those with serious disabilities, and the Justice Department sued the state as a whole this month, saying it was illegally making mentally ill people go into state-run psychiatric hospitals

But it’s the work with police departments that often attracts the most attention. Even as police forces improve training and develop intervention teams to respond to individuals in the throes of a crisis, concerns remain that officers aren’t adequately equipped for the situations and are being forced to fill the void of a resource-starved mental health infrastructure. More than 14 percent of male jail inmates and 31 percent of female inmates are affected by serious mental illness, according to a July speech by Justice Department official Eve Hill, who said society has for too long relied on arrests and jail rather than treatment for the mentally ill.

“From the standpoint of police, they are somewhat frustrated because many of the people who are walking the streets and who are in need of help are not getting it,” said Chuck Wexler, executive director of the Police Executive Research Forum. “They have been out on the streets, they can’t afford medication, and so the police wind up being the only one they come in contact with.”

The Justice Department has incorporated treatment of the mentally ill into several of its wide-ranging civil rights investigations of troubled police departments.

“I think some police departments have really made it a priority and are doing quite a bit. I don’t know that that’s consistent across all the departments,” said Amy Watson, a mental health policy professor at the University of Illinois at Chicago.

A 2011 Justice Department report on Seattle criticized officers for too quickly resorting to force when encountering people with mental illness or under the influence of drugs. In Cleveland, officers were found to use stun guns against people with limited cognitive abilities, and in one case used one on a suicidal deaf man who may not have understood their commands, according to a 2014 report. Albuquerque, New Mexico officers responding to a domestic violence complaint used the same tactic on a man who had doused himself with gasoline, the Justice Department said.

Those cities have since reached court- enforceable consent decrees aimed at overhauling practices.

The Portland police department, which also came under investigation, agreed to new training and accountability measures under a settlement. A federal monitor in February found the Seattle police department was sending trained crisis intervention officers to “crisis events in the great majority of instances” and had given some level of training to all officers in the last two years. A report this month from the Seattle police found that only 1.6 percent of crisis reported during the past year involved any reportable use of force.

Federal officials hope for a similar resolution in Baltimore, where the Justice Department says police have provided minimal training on responding to mental health crises. Under an agreement in principle, Baltimore has pledged to work more closely with disability organizations and mental health providers. But, Gupta said, improvements can occur only if there’s a system with resources in place to help the police. “It’s not about casting blame on specific actors. It’s about making sure that there is adequate support for community-based mental health services in compliance with federal law,” she said.

Ray Kelly, co-director of the No Boundaries Coalition, a Baltimore advocacy group, said he didn’t believe Baltimore police have succeeded in separating law abiding citizens from criminal suspects, “so they definitely don’t take the time to separate the mentally ill from the criminal element or the average Joe buying drugs on one of our corners.”

He said he hoped the report would foster better collaboration between police and mental health experts, so that if there’s a possibility that officers are dealing with someone who’s disabled, they “would call a professional that’s prepared to work with this instead of using aggressive manhandling tactics like they’ve used in the past.”