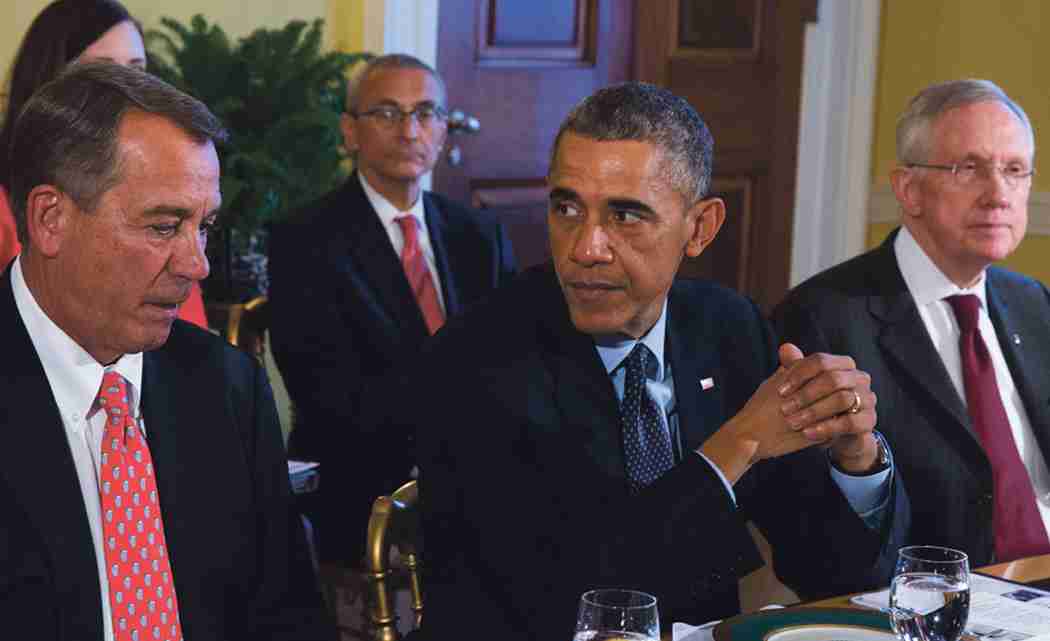 DISTRICT OF COLUMBIA (DC) (AP) — House Republicans debated Friday how to respond to President Barack Obama’s expected executive action on immigration, with GOP leaders anxious to craft a solution that satisfies the demands of their most conservative members without courting a government shutdown.

Options under consideration include suing the president to overturn his action, or passing a stand-alone bill to try to stop him. Some are pushing for House Republicans to write their own immigration bill — something they’ve been unable to do in the past two years — to show they are serious about acting and pre-empt Obama.

Another option would be to pass a temporary spending bill into next year when the GOP will control the Senate, to try to see if Republicans can use their grip on the purse strings to gain leverage over the president.

But it’s not clear that any of these options will be enough to deflate efforts brewing among conservatives to try to use upcoming must-pass spending bills to block Obama from acting. Pragmatists in the caucus are warning loudly that such an approach could result in a government shutdown because Obama would likely veto the bill. But at least some on the right appear unconcerned.

Rep. Steve King, R-Iowa, said he refused to “take a position we’re not going to use the power of the purse to restrain a president who has threatened to violate the Constitution in the most obscene manner possible.”

As for shutdown fears, King pointed to the GOP’s success in last week’s midterms as evidence that the party wasn’t hurt by the last government shutdown it provoked. That was a year ago, in an unsuccessful effort to “defund” Obama’s health care law.

“We picked up beaucoup seats in the House and won the vast majority in the Senate. Where’s the political penalty for doing the right and just and responsible thing?” King said.

Many Republicans, though, are determined to avoid a shutdown, convinced they would pay a political price, and disturbed that they already find themselves in the position of debating one barely a week after the midterms awarded them control of the Senate and a bigger majority in the House. House Speaker John Boehner and Senate Minority Leader Mitch McConnell, who will take over as majority leader come January, both are intent upon avoiding a shutdown.

“Shutting the government down would only serve the president’s interests and we shouldn’t take the bait,” said Rep. Charlie Dent, R-Pa.

Obama’s announcement could come as early as next week and could extend protections from deportation to as many as 5 million people now in the country illegally. Changes to law enforcement programs and an expansion of business visas also are expected.

Obama says he must act because the House GOP never did after the Senate passed a sweeping bill more than a year ago that included a pathway to citizenship for most of the 11.5 million people in the country illegally.

At least some Republicans say they should act now to deprive Obama of that argument, although immigration advocates have little hope of the House arriving at a bill that could pass the Senate and that Obama would sign.

“Right now if he does this and makes all these declarations of the House won’t do anything and yada yada yada, what’s our response? You’re right, we haven’t done anything,” said Rep. Mike Simpson, R-Idaho. “We need to quit trying to fix the blame and fix the problem.”

Judiciary Committee Chairman Bob Goodlatte, R-Va., is exploring options including a lawsuit to stop Obama on immigration, aides said. House Republicans already have announced a lawsuit against Obama over his health care plan but have not yet filed it, so it could be expanded to include immigration.

Some on the right have gone so far as to suggest that Obama should be impeached if he takes unilateral action on immigration, but few if any in the House view that as a viable option, even if they think it might be merited.

“Doing something that’s an impeachable offense and getting impeached are two different things,” said Rep. Matt Salmon, R-Ariz., who’s leading the conservative effort to include language in must-pass spending bills to try to block Obama from acting. “Impeachment’s not going to be on the table.”

Meanwhile there’s debate within the White House on whether Obama should announce the immigration decision as early as next week when he returns from a trip in Asia, or wait until Congress finishes work on a government-funding bill that must be done by the time an existing one expires Dec. 11.

Senate Majority Leader Harry Reid said Thursday that “I’d like to get the finances of this country out of the way” before Obama acts. But his office provided a statement from him Friday to clarify that Congress must act to fund the government “regardless of when the president acts to provide relief to families.”