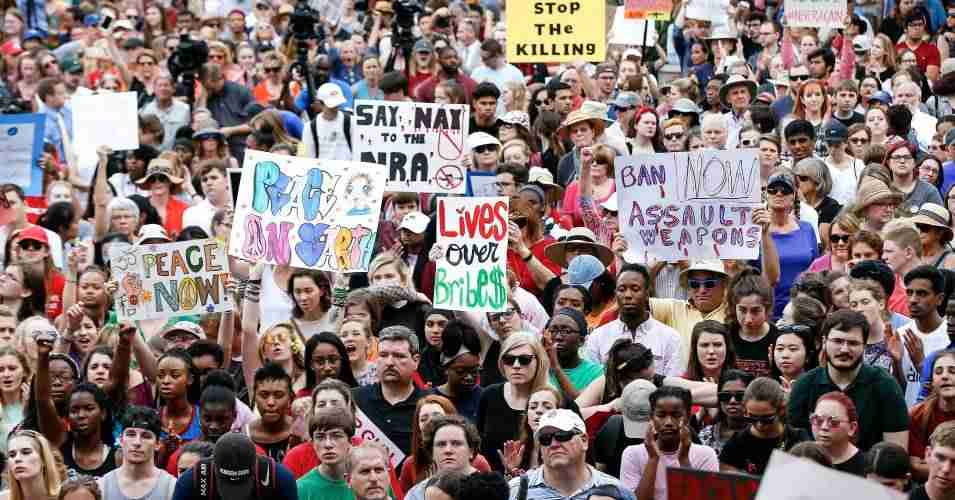 TALLAHASSEE, Fla. (AP) – Thousands of chanting students, including survivors of the Florida school shooting, rallied at the state Capitol on Wednesday, demanding changes to gun laws and threatening to remove Republicans who refuse to address new gun-control measures.

A week after the massacre that killed 17 people, the students took their message into the gun-friendly halls of power in Tallahassee. The impassioned crowd burst into chants of “Vote them out.”

Florida lawmakers have rebuffed gun restrictions since the GOP took control of both the governor’s office and the Legislature in 1999.

The students received a warm reception, but politicians did not offer specific answers. The students’ biggest wish – banning assault-type weapons such as the AR-15, the weapon used by suspect Nikolas Cruz – was taken off the table the previous day in the House.

“We’ve spoke to only a few legislators, and, try as they might, the most we’ve gotten out of them is ‘We’ll keep you in our thoughts. You are so strong. You are so powerful,'” said Delaney Tarr, a senior at Marjorie Stoneman Douglas High School in Parkland. “We know what we want. We want gun reform. We want commonsense gun laws. … We want change.”

She added: “We’ve had enough of thoughts and prayers. If you supported us, you would have made a change long ago. So this is to every lawmaker out there: No longer can you take money from the NRA. We are coming after you. We are coming after every single one of you, demanding that you take action.”

The teens split into several groups to talk with lawmakers and other state leaders about gun control, the legislative process, and mental health issues. Some tearfully asked why civilians should be allowed to have weapons such as the one fired in the attack on Marjory Stoneman Douglas High School one week ago.

When Florida’s Senate President Joe Negron heard the question, he did not answer directly: “That’s an issue that we’re reviewing.” When another lawmaker said he supported raising the age to buy assault-style weapons to 21 from 18, the students broke into applause.

The Florida Senate opened its session by showing pictures of all 17 victims in the attack.

“There are some really harrowing tales here,” said Democratic Sen. Lauren Book of Broward County, who helped organize busloads of students who arrived at the Capitol late Tuesday. She stayed overnight with the students in Tallahassee’s Civic Center and said they stayed up until 5 a.m., researching, writing and preparing to talk with politicians.

“It has been a very, very difficult, tough night. It’s in those quiet moments that the reality of this stuff, without all the noise sets in.

In any given moment, there’s tears. It’s raw and it’s there.”

About 100 students from the high school made the 400-mile (640-kilometer) trip on three buses. They told the 500 students and parents waiting for them that they were fighting to protect all students.

“We’re what’s making the change. We’re going to talk to these politicians. … We’re going to keep pushing until something is done because people are dying and this can’t happen anymore,” said Alfonso Calderon, a 16-year-old junior.

Despite their determination, the students and their supporters are not likely to get what they really want: a ban on AR-15s and similar semi-automatic rifles. Republican lawmakers are talking more seriously about some restrictions, but not a total ban.

Instead, they are discussing treating assault-style rifles more like handguns. That could mean raising the minimum age to purchase the weapon to 21, creating a waiting period and making it more difficult for people who exhibit signs of mental illness to buy weapons even without a diagnosis.

Democrats attempted to get a bill to ban assault rifles and large-capacity magazines heard on the House floor on Tuesday. Republicans, who dominate the chamber, dismissed it.

Scott organized three committees to look at school safety, mental health and gun safety issues. The committees met Tuesday and vowed to make changes. While Scott told reporters several times that “everything is on the table,” he did not answer whether his proposal would include any bans on any type of weapons.

Instead, Scott said he is interested in making it harder for people who are temporarily committed to obtain a gun. He also pledged to increase spending on school safety programs and on mental health treatment.

Authorities said Cruz, 19, had a string of run-ins with school authorities that ended with his expulsion. Police were repeatedly called to his house throughout his childhood. His lawyers said there were many warning signs that he was mentally unstable and potentially violent. Yet he legally purchased a semi-automatic rifle.

Next post Ex-workers at Russian 'troll factory' trust US indictment