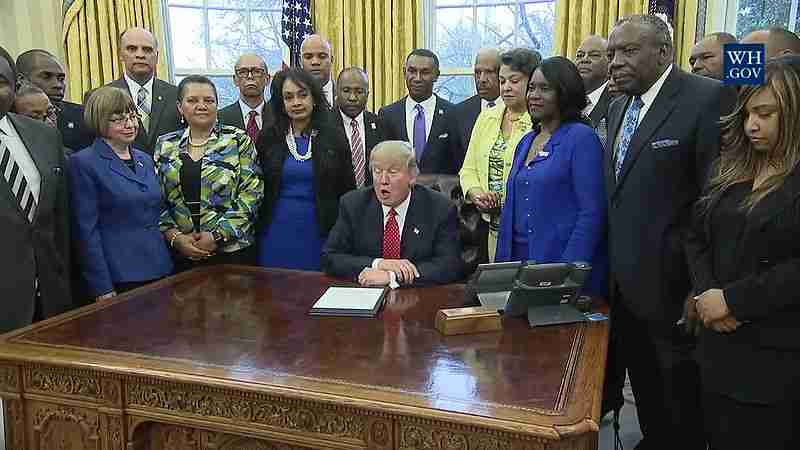 WASHINGTON — President Donald Trump signed an executive order Tuesday aimed at signaling his commitment to historically black colleges and universities, saying that those schools will be “an absolute priority for this White House.” The order contains ample platitudes about the tremendous contributions of HBCUs to American society, but there was no mention of actual dollar amounts allocated.

HBCU presidents are hoping Congress will bolster Trump’s actions to strengthen the schools with dramatically increased funding in the upcoming federal budget. They are calling for $25 billion for infrastructure, college readiness, financial aid and other priorities. Under President Barack Obama’s administration, historically black colleges and universities received $4 billion over seven years.

“The next step is the budget. You cannot have mission without money,” Thurgood Marshall College Fund President Johnny Taylor told reporters outside the White House after the signing ceremony.

Many of the college presidents also went to Capitol Hill on Tuesday to lobby Congress for more funding. Taylor said the $25 billion is needed to make up for years of under- funding and would cover the country’s more than 100 HBCUs.

“This is a great day for my membership and a great day for America,” said Lezli Baskerville, head of the National Association For Equal Opportunity in Education, an umbrella group for public, private and land- grant HBCUs.

Scott said he and Walker planned to personally push for more money for black colleges, and “hopefully we will be more successful than they have been in the last few years.”

“There is no substance at this point,” she said Monday, adding that she is waiting to see the contents of Trump’s executive order, and what Congress does during the budget process.

Trump’s order moves the Initiative on Historically Black Colleges and Universities from the Department of Education into the executive office of the White House. It directs the initiative to work with the private sector to strengthen the fiscal stability of HBCUs, make infrastructure improvements, provide job opportunities for students, work with secondary schools to create a college pipeline and increase access and opportunity for federal grants and contracts.

It does not specify how much federal money the colleges should receive.

The moves are among the actions some college presidents said they would like to see from the new administration. Some of them decided to come to Washington over the objections of students and alumni, saying they can ill afford to play politics while Trump moves quickly to set priorities.

Larry Robinson, interim president of Florida A&M University in Tallahassee, Florida, said he felt it was incumbent upon black college leaders to engage federal officials, “regardless of who’s sitting in the White House, or what their political affiliations are.”

“We’re appealing to his good business sense and hoping he finds an investment worth paying for,” said Dr. Roslyn Artis, president of Florida Memorial University in Miami. She said she favors tax incentives that would attract government contractors and private companies to invest in historically black schools.

Trump met briefly with the college leaders on Monday, as did Vice President Mike Pence and Education Secretary Betsy DeVos. Present alongside Trump was one of his most visible black aides, Omarosa Manigault, who holds degrees from two HBCUs: Central State University in Ohio and Howard University in Washington.

Nearly 300,000 students are enrolled at historically black colleges, according to the National Center for Education Statistics.

While the number has increased over the past generation, the percentage of HBCU attendees among the overall black college student population has decreased from 18 percent in 1976 to eight percent in 2014.

The Washington trip was led by the Thurgood Marshall College Fund, the nonprofit umbrella organization of public HBCUs. Taylor pointed out that two-thirds of such schools are in red, or Republican-controlled states, and that the colleges are heavily reliant on federal and state funding to survive.

While some HBCU presidents in attendance are proceeding with cautious optimism, some African Americans are wary of the administration’s intentions – concerns underscored by DeVos’ seemingly tone- deaf comments Monday praising HBCUs as “pioneers” in school choice that gave black students more options to pursue higher education.

In fact, many of the HBCUs – including some established in the aftermath of the Civil War – were the only option, as state- sanctioned segregation blocked generations of blacks from enrolling at white colleges.

Grambling State University President Rick Gallot pointed out that more than 90 percent of the students at his Louisiana college are eligible for the federal Pell grant, and added he would like to see the program strengthened and made into a year-round opportunity.

“As HBCUs, we’ve always done what politicians stress to agencies: To do more with less,” Gallot said. “Think of the opportunities that would be there to do more with more.”

Next post Muhammad Ali's son detained at airport: 'Are you Muslim?'