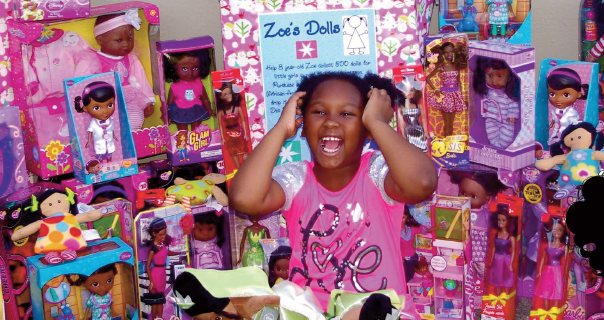 In their Black Doll-White Doll experiment in the 1940s, Dr. Kenneth Clark and his wife Mamie Clark filmed young black children selecting white dolls instead of black dolls when asked to choose which was prettier, smarter and better. Mrs. Clark facilitated the experiment for her master’s degree thesis and the results were used to prove that school segregation was distorting the minds of young black kids, causing them to internalize stereotypes and racism, to the point of making them hate themselves.

Nine-year old Zoe Terry will talk about her journey to becoming the CEO of her company and the obstacles she has faced as one of eight students in South Florida slated to take the stage on Feb. 26 at The Adrienne Arsht Center during the TEDx Youth@Miami event.

The event, which will be live-streamed all over the world, takes place at 6:30 pm. TEDx Youth@Miami, a TEDx event, assembles some of South Florida’s most invigorating youth to present live TED-like talks with their peers and the community.

Terry will “talk” to the audience about how she was diagnosed with a stroke while a two-year old toddler and how it affected her body movement and speech. The young CEO will share how despite having limited mobility at the time, with intensive therapy and persistence, she went from not being able to do a jumping jack, to playing tennis, dancing and riding her bike.

An especially significant portion of her Tedx Talk is her triumph over bullying. She will tell the audience that when she was the only African American in her kindergarten class, she was picked on because “her skin was so dark” and her “hair was so puffy.”

Her speech will also include motivation for launching Zoe’s Dolls, her non-profit company that donates little brown dolls to little brown girls during the holiday season and throughout the year. Zoe’s Dolls also has a host of programs such as ‘Loving the Skin I’m In,’ ‘Creative Expression Contest,’ and ‘Love Letters to Black Girls,’ which is currently accepting original, “thought-provoking, inspiring, encouraging and motivational letters” from prominent black women and men for little black girls.

Letter writers are encouraged to add personal touches and share personal stories that will empower young girls. For more information on how to participate in the ‘Love Letters to Black Girls’ project or Terry’s scheduled TEDx talk, visit zoesdolls.com.