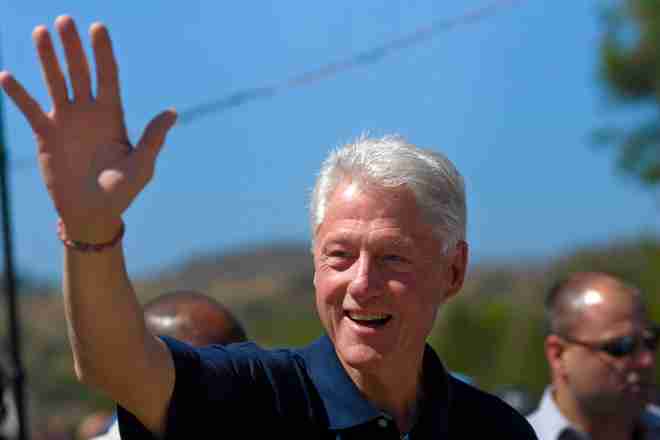 WASHINGTON – Former President Bill Clinton is going on a fundraising swing reminiscent of his presidential campaigns of the 1990s. But this time he’s doing it for his wife.

Hillary Rodham Clinton’s presidential campaign has scheduled more than a dozen December events featuring the former president as her team prepares for an end-of-year finance deadline ahead of the first contests in Iowa and New Hampshire.

The fundraising blitz, Bill Clinton’s most aggressive stretch of the year, shows how Hillary Clinton’s campaign can multiply her money largesse with the help of her husband, one of the Democratic party’s most prolific rainmakers. Working together, the couple will hold at least five fundraising events on some single days in December.

After staying behind the scenes for much of the year, Bill Clinton has slowly begun taking a larger public role in the campaign. And it isn’t just with fundraising. He introduced pop singer Katy Perry at a concert before the Iowa Democratic Party’s Jefferson-Jackson dinner last month and appeared with his wife at a party barbecue in Ames, Iowa, last week.

“No one knows her better than him and no one knows the process better, so it’s a natural fit,” said Ira Leesfield, a Miami attorney and longtime Clinton donor. “It’s like Derek Jeter taking the field when he was 38.”

Bill Clinton kicks off December with fundraisers in Seattle, Los Angeles, the Phoenix area and in Laredo, Texas, where he will join with Rep. Henry Cuellar, a Texas congressman who represents the state’s Rio Grande Valley.

The former president then raises money on Dec. 7 in Rhode Island with the state’s Democratic governor, Gina Raimondo, and Rhode Island’s congressional delegation. He headlines events in North Carolina later that same day.

Later that week, the couple will show how they can spread their fundraising clout around the country. On Dec. 10, Hillary Clinton raises money in New York City while her husband meets with donors in Pennsylvania with stops in Pittsburgh, Bethlehem and Scranton.

The next day, the former secretary of state will fundraise in Tulsa, Oklahoma, and St. Louis while her husband appears at events in the Chicago area and Munster, Indiana.

In mid-December, the ex-president will raise money in Washington, D.C., including an event at the home of longtime Democratic powerbrokers Vernon and Ann Jordan. He will travel to Richmond later that day for a fundraiser with Virginia Gov. Terry McAuliffe, a friend and fundraiser for the Clintons.

The Clintons will head into the holidays with a New York City dinner concert with musician Sting on Dec. 17. The event will benefit a new joint fundraising committee called the Hillary Victory Fund and will range from $33,400 per person to $100,000 for couples who serve as event chairs.

David Brock, a Clinton supporter who runs several progressive groups aiding her candidacy, said Bill Clinton is a “gifted orator who has the ability to move people.”

Brock recalled how in the spring of 2013 the former president spoke at a donor conference for two of his projects, American Bridge 21st Century and Media Matters. It was no standard stump speech, Brock said. “Rather, off the cuff, he wove an intricate tapestry for probably 45 minutes about the history of news and its relation to democracy,” he said.

The 150 donors in the New York hotel ballroom were “in a trance,” Brock said.

“There’s no one else at his level who is that good,” Brock said. “He says things about you that you can’t say about yourself, making him quite an effective endorser and validator.”