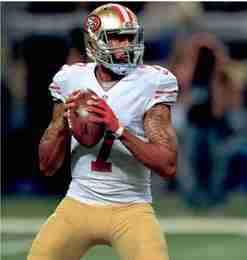 SANTA CLARA, Calif. – San Francisco 49ers quarterback Colin Kaepernick’s decision to sit while the national anthem is being played in protest of what he considers police brutality has sparked strong reaction across the sports world. Here’s what some current and former players and coaches have said about the controversy: “I listened to him and he makes all the sense in the world. He’s within his rights and he’s telling the truth as he sees it and I am with him 100 percent.” – Jim Brown, former Cleveland Browns running back and Pro Football Hall of Famer, on NFL Network .

“I acknowledge his right to do that. I don’t respect the motivation or the action.” – Michigan head coach Jim Harbaugh, who coached Kaepernick with the San Francisco 49ers from 2011 to 2014. Harbaugh later said on Twitter , “I apologize for misspeaking my true sentiments. To clarify, I support Colin’s motivation. It’s his method of action that I take exception to.”

“Voltaire so eloquently stated, `I may not agree with what you say, but I’ll defend it until death your right to say it.’ That’s a principle that our country is founded on. I don’t think you cannot deny someone the right to speak out or mock or make fun or belittle anybody else’s opinion.” – John Harbaugh, Baltimore Ravens head coach and Jim Harbaugh’s brother, to ESPN.

“There is some depth and some truth to what he was doing. I think he could have picked a better platform and a better way to do it, but every day they say athletes are so robotic and do everything by the book and then when somebody takes a stand like that, he gets his head chopped off.” – Richard Sherman, Seattle Seahawks cornerback, at a Monday press conference.

“You’ve got to respect the man’s opinion, as well as his actions. I definitely understand where he’s coming from in choosing to do what he did. I think it’s an individual choice. At the same time, I think it’s a duty of ours as leaders, especially with young kids, to make a good, proper announcement if we feel the need to, and I think that’s what he’s doing. I support him in that.”Ndamukong Suh, Miami Dolphins defensive tackle, according to the Palm Beach Post .

“All lives matter. So much going on in this world today. Can we all just get along! Colin, I respect your stance but don’t disrespect the Flag.” – Jerry Rice, former 49ers wide receiver and Pro Football Hall of Famer, on Twitter .