Young whites divide on handling violence by, against police 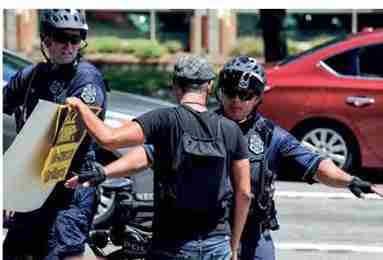 That’s according to a new GenForward poll of young adults age 18 to 30. The poll is conducted by the Black Youth Project at the University of Chicago with the Associated Press-NORC Center for Public Affairs Research. The first-of-its-kind poll pays special attention to the voices of young adults of color, highlighting how race and ethnicity shape the opinions of a new generation.

The poll also suggests most young adults think requiring police to wear body cameras would help reduce violence by police. Things to know from the poll about young Americans’ views about police and the Black Lives Matter movement:

POLICE VIOLENCE AND VIOLENCE AGAINST THE POLICE
About six in ten young adults overall say violence by the police and violence against the police both are very or extremely serious problems in the United States. But views vary among those of different racial and ethnic backgrounds.

Thinking specifically about recent killings of black people by the police, 72 percent of African-American young people, 61 percent of Asian-Americans, 51 percent of Latinos and 40 percent of whites say they consider them part of a larger pattern, rather than isolated.

WHAT WOULD HELP
Seven in ten young Americans say they think requiring on-duty police officers to wear body cameras would help reduce violence by police against civilians. But young African-Americans are somewhat less enthusiastic about the idea, with just over six in ten saying that it would be effective.

On the other hand, both African-Americans (68 percent) and Latinos (66 percent) are more likely than whites (51 percent) to say requiring a special prosecutor to investigate cases where police kill or seriously injure civilians would be effective at preventing such deaths. Overall, 57 percent of young people think so. Fifty-six percent of all young people say setting stricter criteria for police use of deadly force would be effective at reducing instances of violence by the police, including 68 percent of blacks and Hispanics, 61 percent of Asian-Americans and just 48 percent of whites.

But among young whites in particular, and among significant minorities of young Asian-Americans and Latinos, there are feelings that the rhetoric of the movement encourages violence against the police – more than six in ten whites, more than four in ten Asian-Americans and Latinos and just two in ten African Americans think the movement’s rhetoric encourages violence against the police.

The poll of 1,958 adults age 18-30 was conducted Aug. 1-14 using a sample drawn from the probability-based GenForward panel, which is designed to be representative of the U.S. young adult population. The margin of sampling error for all respondents is plus or minus 3.9 percentage points.

Previous post What If: Can Trump boost turnout among white voters?