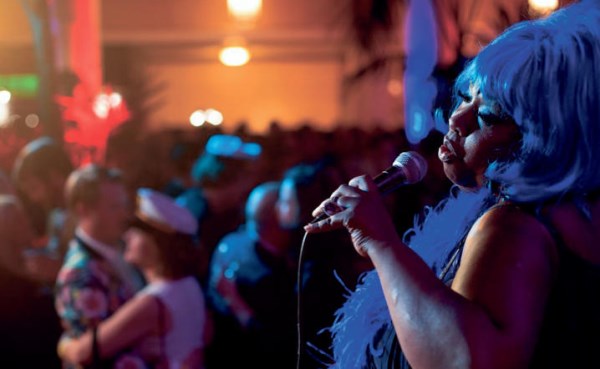 Delray Beach, Fla. – The Spady Cultural Heritage Museum, in collaboration with Arts Garage, will welcome back Pat “Mother Blues” Cohen and Dr. Joan Cartwright to hold a special concert and “Talk Back” session, as the focus of the 2021 Juneteenth Celebration.

A popular performer at the 2017 Spady Living Heritage Festival, Cohen returns to Delray Beach, thanks to a Traditional Arts Touring Grant from South Arts. She will perform a full-length concert, as part of the ofﬁcial celebration, on Saturday, June 19, 2021, at 8 p.m. at Arts Garage, 94 NE 2nd Avenue, Delray Beach, FL 33444. The concert will be followed by a “Talk Back” session with Dr. Cartwright about women and music.

Tickets to the concert are $40-50 per person and can be purchased at https://artsgarage.org/event/patmother-blues-cohen/ or by calling 561450-6357.

“When Mother Blues visited us the ﬁrst time, we fell in love with her energy and personality on the stage. She is a true blues singer, telling stories through lyric and song, of pain, perseverance, struggle, passion and joy,” said Museum Director Charlene Farrington. “Juneteenth is a great occasion to celebrate having her back with us.”

Juneteenth, held every June 19, is a cultural commemoration, recognizing a special date in American and Florida history – the end of slavery in the United States.

“Arts Garage celebrates diversity in every aspect of the organization from our staff to our programming. Our collaboration with the Spady Cultural Heritage Museum always results in amazing programming, and this event is a perfect example. We couldn’t be more excited to showcase Pat ‘Mother Blues’ Cohen on our stage this year,” said Marjorie Waldo, M.Ed., president & CEO of the Arts Garage.

Since the age of six, Cohen was surrounded by music, played and sung by family members. Her ﬁrst professional engagement came while she was in college, when she sung at a local club.

“They loved me, and the rest is history because I’ve been singing the Blues ever since,” Cohen said. For years, she sang in New Orleans venues, including the House of Blues, until Hurricane Katrina destroyed her home and she relocated to North Carolina.

Dr. Cartwright, a veteran of jazz and blues for 40-plus years, is a retired vocalist, composer, and author, who has toured and taught in 22 countries. Her titles include Blues Women: First Civil Rights Workers, Amazing Musicwomen, So You Want To Be A Singer? and A History of African American Jazz and Blues with interviews with Quincy Jones, Dewey Redman, Lester Bowie, and other noted Jazz musicians and aﬁcionados. In 2007, Dr. Cartwright founded Women in Jazz South Florida, Inc., a non-proﬁt organization promoting women musicians globally. She hosts an Internet radio show, MUSICWOMAN, featuring women who compose and perform their own music. Dr. Cartwright has two personal CDs – Feelin’ Good and In Pursuit of a Melody.

“The ‘end of slavery’ in the United States is highly contemplated concept and has a deep a layered meaning to our South Florida community,” said Farrington. “Some would not agree that slavery has ended, others cannot comfortably talk about it because of denial or guilt; others think the past should be buried along with the dead.”

Juneteenth celebrates not only the national Juneteenth, which is also known as Emancipation Day since news of freedom from slavery fell on the 19th of June nearly 150 years ago, but also May 20, 1865, which is Florida’s Emancipation Day. Juneteenth originated as a celebration of the ending of slavery in Texas. On June 19, 1865, Major General Gordon Granger and 1,800 troops of the Union Army arrived in Galveston, Texas, and announced that the Civil War had ended and all enslaved persons were free. Even though President Abraham Lincoln’s Emancipation Proclamation had gone into effect on January 1, 1863, freeing all enslaved persons in those states in rebellion against the United States, for various reasons, the decree had not yet taken effect in Texas. To learn more Juneteenth, visit HYPERLINK “http://www.juneteenth.com/”www.jun eteenth.com