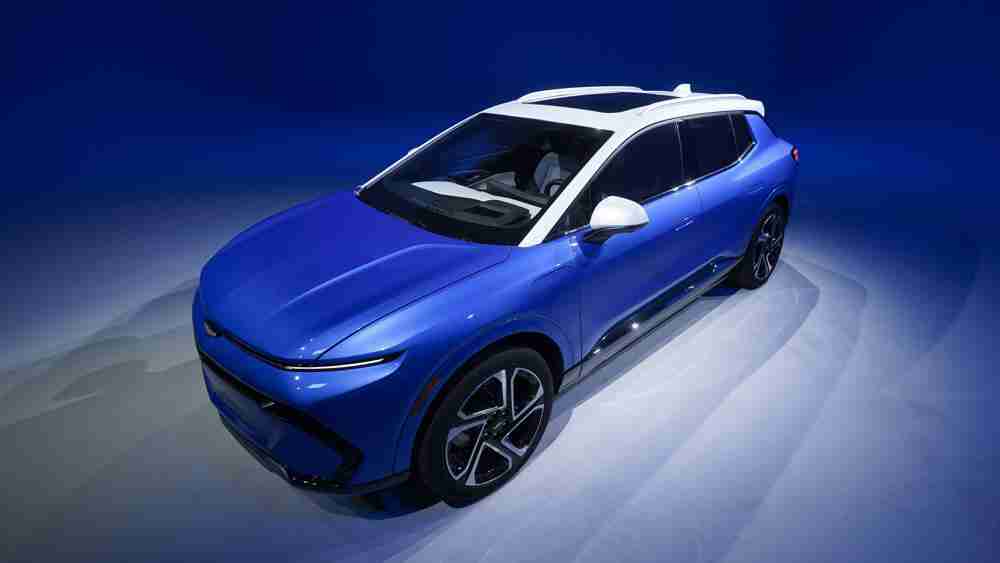 WARREN, Mich. (AP) — Even though battery costs are rising, auto companies are rolling out more affordable electric vehicles that should widen their appeal to a larger group of buyers.

The latest came Thursday from General Motors, a Chevrolet Equinox small SUV with a starting price somewhere around $30,000 and a range-per-charge of 250 miles (400 kilometers). You can get range of 300 miles (500 kilometers) if you pay more.

GM won’t release the exact price of the Equinox EV until closer to the date it goes on sale, about this time next year. But the SUV is at the low end of Edmunds.com’s list of prices for electric vehicles sold in the U.S., where the average cost of an EV is around $65,000.

Hitting a price around $30,000 and a range per charge close to 300 miles is key to getting mainstream buyers to switch away from gasoline vehicles, industry analysts say.

“You’re kind of at that sweet spot,” said Ivan Drury, director of insights for Edmunds.com. “You’re basically at the price point that everyone is clamoring for.”

Auto industry analysts say that if the Equinox makes efficient use of interior space with plenty of cargo and passenger room, and if it is styled similar to current gas-powered small SUVs, it should be a hit in the most popular segment of the U.S. auto market. About 20% of all new vehicles sold in the U.S. are compact SUVs.

“It’s a perfect vehicle for a lot of different users, whether it’s a small family, maybe an empty nester,” said Jeff Schuster, president of global forecasting for LMC Automotive, a Detroit-area consulting firm. “You’ve got space to haul things, but it’s easy to drive.”

A $30,000 EV that checks all of the boxes is just a little above the price of a comparable small gas-powered SUV. The Toyota RAV4, the top seller in the segment and the top-selling vehicle in the U.S. that isn’t a pickup, starts at just over $28,000.

Until the last few years, electric vehicles were either expensive and aimed at affluent luxury buyers, or cheaper but with limited travel ranges. For example, a base version of Tesla’s Model 3, the lowest-price model from the top-selling EV brand in the U.S., starts at more than $48,000. A larger Tesla Model X SUV starts at over $120,000.

The only EVs with starting prices under $30,000 (including shipping) now are versions of the Nissan Leaf and Chevrolet Bolt. Both are smaller than a typical gas-powered compact SUV. The Mini Cooper Electric, Mazda MX30 and Hyundai Kona Electric are in the $30,000s, according to Edmunds.

GM may find it difficult to keep the Equinox price around $30,000, largely because minerals such as lithium, copper, cobalt and nickel that are key components of batteries have been rising fast. There’s a finite number of mines and increasing demand as nearly all automakers introduce new EVs.

Drury says that even if GM is able to keep the Equinox starting price around $30,000, demand likely will be high enough so the company builds mainly higher-priced versions. And some dealers have been marking up EVs beyond the automaker’s sticker price due to high demand. In the first half of the year, U.S. EV sales rose 68% from the same period a year ago, to nearly 313,000.

Some EVs could get a whole lot cheaper in the U.S., too, with federal tax credits starting next year of up to $7,500 that are part of . But meeting federal requirements may be difficult.

The vehicles and batteries have to be assembled in North America, and the new law phases in requirements that battery minerals and parts have to come from the continent. Most minerals such as lithium, a key battery ingredient, are now imported from China and other countries.

The Equinox checks the North American assembly box. It will be made in Mexico. The company won’t say where the battery will be made, but GM has announced three joint-venture battery factories in the U.S., including one that’s operating already in Warren, Ohio.

From there, GM is working on meeting the other criteria for getting the tax credit. “We’re really working through the rules and the regulations right now,” said Steve Majoros, vice president of marketing for Chevrolet. “We think it’s all lining up nicely, but more details to come on that.”

Majoros hinted that it may take a couple of years to meet all the government’s requirements to get the full credit as GM takes more control of its supply chain for EV parts.

The Equinox EV, Majoros said, is longer, wider and a bit shorter than the gas versions of the same vehicle. GM used new interior packaging methods to create comparable passenger and cargo space to the gas Equinox, he said. The relatively small price difference between the two should get many customers to consider EV over gas, he said.

“It does a lot of things right,” Majoros said. “So when it does that, the (sales) volume follows.”

GM CEO Mary Barra has said the company will overtake Tesla as the nation’s largest seller of EVs by the middle of this decade. The Equinox EV is a step toward that.

“We think it’s going to be one of the products that’s really going to help that mainstream adoption really take off in the marketplace,” Majoros said.