DMV ends remote check-in, but is it to blame for long waits? 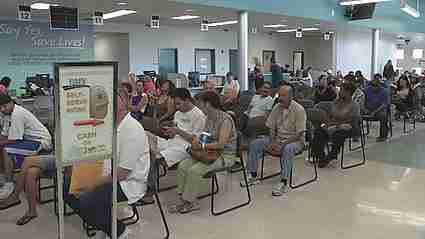 CARSON CITY, Nev. (AP) _ The Nevada Department of Motor Vehicles rolled out its online check-in system last September to much fanfare, with slick ads and the tagline, “Some call it revolutionary. We just call it Dash Pass.”

Less than a year after implementing a four-year, $520,000 contract and promising to “liberate customers from waiting in line,” the DMV removed the ads and shut down Dash Pass’ marquee feature at five busy Reno and Las Vegas offices _ the ability to check in from home by smartphone and come to the DMV office only when a technician was ready.

“We embraced a new technology that was intended to provide an enhanced customer experience,” DMV Director Troy Dillard said. “The technology was not as effective as promised once it was put into a real-world environment.”

DMV officials released statistics Friday showing that since they cut off remote access to Dash Pass and forced people to come in, average wait times dropped from 112 minutes to 41 minutes at an office in Las Vegas, and 138 minutes to 76 minutes at the Henderson office, in the most dramatic examples. Officials also said they had 175 fewer no-shows per day at two busy Las Vegas offices.

“The numbers are telling a powerful story,” Dillard said.

The vendor behind Dash Pass, Pasadena, California-based QLess, disagrees. Company CEO Alex Backer attributes the shorter wait times to fewer customers attempting to go to the DMV because the Dash Pass remote queue is no longer an option.

“The data shows that when the NV DMV makes it more inconvenient for citizens to wait by reducing remote access, fewer people go to the DMV,” he said in an email.

DMV statistics show fewer people are getting in line since the option was removed this week _ usually 10 to 40 fewer per day in busy Las Vegas DMV offices that queue up more than 1,000 people a day. The experiment has also turned up hundreds fewer no-shows on average, but Backer said the impact should be negligible.

A technician should spend less than a minute moving on from a no-show, Backer said, but would save perhaps 15 minutes per customer by serving fewer customers.

QLess said their systems work well elsewhere, including at DMV offices in eight other states.

The Kansas Division of Vehicles told the Associated Press that it has used a QLess system in its six largest offices for three years and has seen overall wait times drop. Public feedback has been positive, spokeswoman Jeannine Koranda said.

Michigan uses a QLess system in 10 of its busiest offices and it plans to expand the system.

“Overall, we’re very pleased with the system that’s powered by QLess,” spokesman Fred Woodhams said. “I’m not sure it’s had any effect on the time itself, but what it has helped is with the perception of wait time.”

Nevada DMV officials are in talks with QLess about whether the contract can be changed.

The DMV previously acknowledged it’s been short-staffed and is training 93 new employees. It has also said that recent trends _ including Nevada’s switch to more secure Real ID-compliant licenses, the addition of driver authorization cards for immigrants, and more car-buying activity _ have led to more customers.

DMV spokesman David Fierro said customers can still leave the DMV office and do other things while they wait, with a Dash Pass text alert reminding them when to report back to the office. He also said the DMV hopes to add an appointment system later this year and isn’t ruling out that remote check-in might return.

The news that the feature was suspended upset some customers.

Las Vegas resident Mike Weber said he checked in remotely to the DMV in May to renew his license. He was able to move himself back in the virtual line a few times as he navigated traffic on the way to the DMV office.

Once he arrived, he was in and out in 30 minutes, and his infant daughter slept the whole time.

“There were people in line and it was packed to the gills. But I waltzed right in,” Weber said. “I think it’s a shame that they’re getting rid of something like that and forcing people to sit there for hours at a time.”