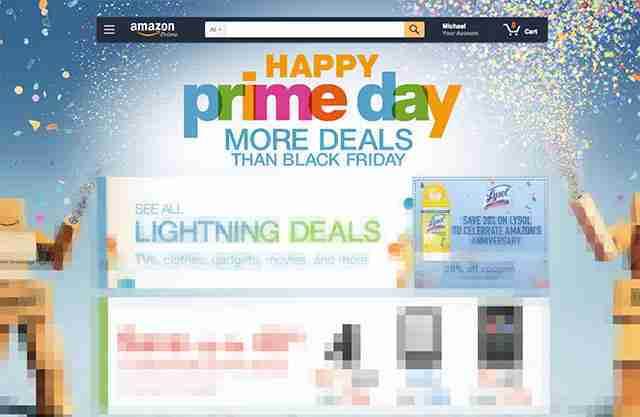 NASHVILLE, Tenn. (AP) _ Amazon aimed for Christmas in July with its much-hyped “Prime Day” sale. But some shoppers found a lump of coal instead.

The online retailer said Prime Day would offer bigger sales than those during the winter holiday shopping season. The goal was to boost $99 annual Prime loyalty program memberships during the sluggish summer months. The sale gained so much attention, other retailers, including Wal-Mart, Target, Macy’s and Best Buy, had sales of their own.

But some Amazon customers were disappointed by Prime Day. Some thought the discounts weren’t deep enough. Others didn’t like that the deals were only available for a limited time and in limited quantities. And still other Amazon customers criticized the types of products that were marked down.

By midday Wednesday, Amazon was offering a Kindle Fire marked down to $79 from $139, a GoPro camera bundle marked down from $691 to $500 and a Blu-Ray “Lord of the Rings” trilogy set marked down from $120 to $28. But there also were markdowns on more mundane household items like detergent and baby wipes, causing some shoppers to compare Prime Day to a garage sale.

“The biggest disappointment is that Prime Day seems to focus more on quantity over quality,” said Emily Wienberg, 24, from Boston, who was looking for a Bluetooth speaker or printer on sale.

Doug Messer, 21, from Westchester, New York, was disappointed in the sale too.

“I was frustrated to see that only a certain amount of users could claim each deal,” he said. “We found a TV we wanted and when we went to claim it, we were added to a waitlist. Not really a deal if only a certain percentage of visitors can take advantage of it.”

Larry Chiagouris, marketing professor at Pace University, said if people get disillusioned with Amazon’s sales announcements they won’t trust future sales. “They haven’t damaged the trust people have in the overall Amazon brand, but they have done major damage to the credibility of sales announcements going forward,” he said. “People are going to get numb to sale announcements and they’ll no longer provide the traffic kick start they’re designed to.”

Allen Adamson, managing director of branding firm Landor Associates, said that customers won’t completely lose trust in the Amazon brand, but he questions the overall strategy of the sale.

“If you’re going to offer this, then you have to really do it right,” said Allen Adamson, managing director of branding firm Landor Associates. “The Amazon business model is everyday value. Jumping on the bandwagon to try to create Black Friday in muggy July really feels off-brand for Amazon.”

Early data showed the promotion boosted sales, though. ChannelAdvisor, which tracks sales of third-party sellers on Amazon, said sales jumped 80 percent compared with the same day a year ago in the U.S. and 40 percent in Europe. On a normal non-sale day, that figure would be up about 25 percent.

Forrester analyst Sucharita Mulpuru said that was “decent” for a sales day. But a big sale like Cyber Monday, the busy online shopping day after Thanksgiving, or Alibaba’s Single’s Day, an annual sale in November, generates a lift that is two, three or five times normal sales.

“It’ll be a decent day for them but is it going to be earth shattering? No,” she said.

Amazon said by 1 p.m. on Wednesday, the speed with which customers were ordering had already surpassed 2014 Black Friday. Shoppers picked up “tens of thousands” of Fire TV Sticks, 35,000 Lord of the Rings Blu-Ray sets, 28,000 Rubbermaid sets, and 4,000 Echos in 15 minutes. A Kate Spade purse on sale sold out in less than a minute and 1,200 Samsung TV bundles on sale for $999 sold out in less than 10 minutes.

Thomas Palladino, 23, in public relations in New York, snapped up an Amazon Fire TV stick marked down from $39 to $15 and Ray-Ban Wayfarer sunglasses marked down from $142 to $57. He said the sale made him feel like Amazon appreciated its Prime members.

“I have been completely satisfied with their offerings so far, but this just goes above and beyond,” he said.