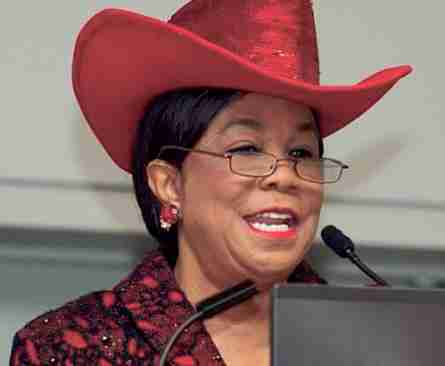 Biden was expected to make his historic appointment over the weekend but the tension escalating between Ukraine and Russia put it on hold.

After he was elected in November 2020, Biden said he would keep his campaign promise to nominate the ﬁrst Black woman to serve on the Supreme Court.

Wilson, a Miami native, said Jackson’s deep ties to South Florida and her ambition to become a Supreme Court Justice are the reason she’s supporting her.

Brown Jackson, 51, grew up in Miami and graduated from Miami Palmetto Senior High School, where she told classmates that her goal was to serve on the Supreme Court someday. She was born in Washington D.C., graduated from Harvard Law School.

Wilson hopes Biden selects Jackson and the U.S. Senate subsequently conﬁrms her nomination to sit on the highest court in the United States, helping Jackson achieve a childhood dream.

Wilson, a former longtime public schools principal who later served on the Miami-Dade County School Board, said as a child, Brown Jackson was an excellent debater and demonstrated incredible promise during her years in High School.

Wilson said Brown Jackson is an example of excellent students produced in the hallways and classrooms of Miami-Dade schools.

Her success extends beyond high school when she became an attorney and currently serves on the United States Court of Appeals for the District of Columbia Circuit.

She previously served as a district judge in the U.S. District Court for the District of Columbia for eight years and clerked for three Supreme Court Justices including Breyer.

“With bipartisan support, the United States Senate conﬁrmed Ketanji Brown Jackson to the United States Court of Appeals for the District of Columbia Circuit in 2021 and, over the years, we have learned that bipartisan support is critical in the SCOTUS nomination process," Wilson said. "President Biden has the opportunity to make history with his nomination, and I delight in the idea of that nominee being Ketanji Brown Jackson.”

Though her career was full of accomplishments in law, Jackson’s family faced life challenges. Her uncle was sentenced to life in prison on a narcotics trafﬁcking conviction in 1989, a year after she ﬁnished high school. The conviction could be the subject of debate during the Senate hearings to conﬁrm her nomination to the bench.

At her 2013 swearing-in ceremony as a federal judge in D.C., Breyer, praised Jackson, who had served as his law clerk after graduating from Harvard Law School, noting how her professional and life experiences had influenced her legal thought. “She sees things from different points of view, and she sees somebody else’s point of view and understands it,” Breyer told reporters.

The Black alumni of Harvard Law School delivered a letter to the White House supporting Jackson for the Supreme Court, and the Cuban American Bar Association (CABA) is also in support of Jackson. In a letter to the White House, the CABA highlighted Jackson’s exceptional career as an attorney and judge, and that she spent her formative years in Miami-Dade County, where she still has family members. "And she is testament to the outstanding capacity of Miami-Dade County public schools," the letter said.

Brown Jackson is among 12 candidates on Biden’s list to replace Breyer, who served on the U.S. Supreme Court for the past 27 years.

Next post The potential power of our new Supreme Court justice

Previous post What happened to the Black communities of Polk County