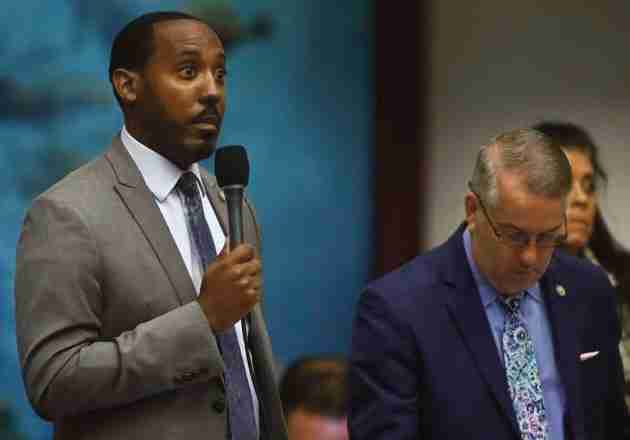 Tallahassee, Fla. (AP) – Voting rights groups sued Florida on Friday over a congressional map drawn by Gov. Ron DeSantis and passed by the GOP-controlled Legislature, saying it will diminish the state’s Black representation and beneﬁt Republicans.

Florida lawmakers approved the map Thursday as part of a contentious three-day special legislative session during which Black and Democratic representatives staged a sit-in on the House floor, prayed and sang “We Shall Overcome” in protest.

DeSantis, who is considered a top tier presidential candidate in 2024, signed the measure into law Friday.

The League of Women Voters of Florida, the Black Voters Matter Capacity Building Institute, Equal Ground Education Fund and others ﬁled the suit in a state court in Tallahassee. The case alleges the new map violates provisions of the Florida Constitution that prohibit districts from diluting the electoral power of minorities and from being drawn to beneﬁt one political party over another.

“He wants to rig the state and he wants to do that by drawing lines that unfairly represent the state and our voting population,” said Equal Ground founder Jasmine Burney-Clark in a phone interview. “We also know that he has ambitions to become president of the United States, and creating a Congress that is more favorable to the issues he presumably would push in his administration makes it easier for him to do so.”

The lawsuit names as defendants Secretary of State Laurel M. Lee, Attorney General Ashley Moody and the Republican leaders of the House and Senate, among others. Their offices did not immediately return emails seeking comment.

DeSantis took the unusual step of vetoing the map drawn by the Legislature earlier this year and proposing his own, calling lawmakers back into the special session to approve it. Democrats say the map strongly favors the GOP and would dismantles two districts currently held by Black members of congress.

The governor’s office drew up a map it described as neutral on race and party affiliation, and which it said abided by both the state and federal constitutions. But even supporters have acknowledged that it is likely to draw legal challenges.

Democratic state Rep. Angie Nixon, who led the protest on the House floor, was expecting the lawsuit.

“The map is unconstitutional and it’s illegal and they knew it,” she said in a phone interview.

She said she’s heard rumblings that she’s going to be punished for her protest, but said it’s minor in comparison to actions that civil rights leaders have endured to seek racial equality.

“I cried this morning,” she said, with a trembling voice. “I cried because I thought about what my grandmother went through, and my grandfather, and my ancestors who risked their lives to vote, to have a voice to be heard, to be respected.” The Florida congressional delegation now has 16 Republicans and 11 Democrats, and the state is poised to gain one U.S. House seat based on the results of the 2020 U.S. census. Many political observers have said the DeSantis map could give Republicans a 20-8 advantage, though Florida’s vast number of unaffiliated voters can swing elections. Such an advantage would help DeSantis, should he run for and win the White House in 2024.

Of Florida’s 14.3 million registered voters, about 36% are Republicans and 35% Democrats, while the overwhelming majority of the remainder have no party afﬁliation.

Black Floridians currently serve in ﬁve of the state’s 27 districts, representing about 19% of the delegation. Four of them are Democrats; one of them is a Republican in an overwhelmingly white constituency. Black people represent about 16% of Florida’s population.

Previous maps had included a long, slim district spanning northern Florida that would have largely kept intact the constituency of Black Democratic Rep. Al Lawson. DeSantis has singled out that district, saying it violated guidelines for compactness.