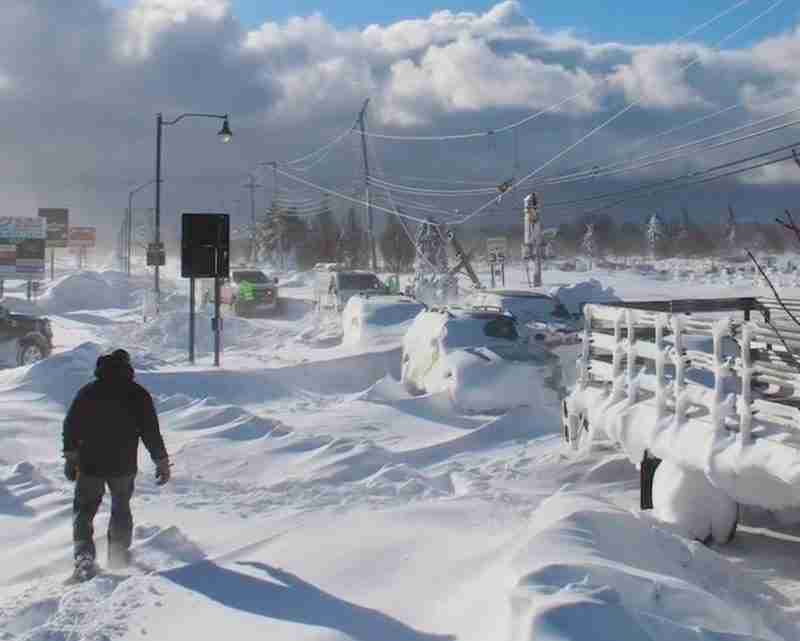 US HUNKERED DOWN FROM FRIGID, DEADLY STORM

Millions of people hunkered down to ride out the frigid storm that has killed dozens of people across the United States, trapping some residents inside homes with heaping snow drifts and knocking out power to several hundred thousand homes and businesses. Forecasters said a bomb cyclone – when atmospheric pressure drops very quickly in a strong storm – developed near the Great Lakes, stirring up blizzard conditions, including heavy winds and snow. The scope of the storm was unprecedented, stretching from Canada to along the border with Mexico. Thousands of domestic and international flights were canceled, with Southwest Airlines coming under particular criticism for lagging far behind others in restoring service and leaving travelers stranded.

Days of freezing temperatures in Deep South areas that usually freeze for only hours continue threatening dozens of water systems such as in Jackson, Miss., where burst pipes leaked millions of gallons of water.

In South Florida, temperatures dropped to as low as 43 degrees (6.1 degrees Celsius) in West Palm Beach. The temperature drop was conducive to iguanas falling out of trees since the cold-blooded reptiles typically become immobilized in unusually cold weather.

President Joe Biden celebrated a quiet Christmas with his family at the White House and spoke with service members stationed around the world. “They’re away from their families to protect us,” Biden said in a tweet. “And they have the thanks of a grateful, indebted president.” The White House said Biden and the ﬁrst lady, Jill, called members of the Army stationed at Panama City, Panama; the Navy aboard the USS The Sullivans in the Arabian Sea; the Marine Corps at Marine Corps Recruit Depot San Diego; the Air Force at Okinawa, Japan; the Space Force in Europe; and the Coast Guard aboard the cutter Bertholf in Alameda, Calif.

This is Biden’s second Christmas as president. On Saturday, Biden and his family joined a Mass on Christmas Eve at the White House and continued their holiday tradition of an Italian dinner. On Friday they carried on another tradition with their second holiday visit to Children’s National Hospital. Biden was the ﬁrst sitting president to join his wife when they visited hospitalized children and their families before Christmas last year, according to the White House.

Pope Francis warned Vatican bureaucrats on Thursday to beware the devil that lurks among them, saying it is an “elegant demon” that works in people who have a rigid, holier-than-thou way of living the Catholic faith.

Francis used his annual Christmas greeting to the Roman Curia to again put the cardinals, bishops and priests who work in the Holy See on notice that they are by no means beyond reproach and are, in fact, particularly vulnerable to evil.

Francis has long used his Christmas address for an annual dressing down of Vatican bureaucrats, taking them through a typical Jesuit-style “examination of conscience” to help them repent in the run-up to Christmas.

Three buses of recent migrant families arrived from Texas near the home of Vice President Kamala Harris in record-setting cold on Christmas Eve. Texas authorities have not conﬁrmed their involvement, but the drop-offs are in line with previous actions by border-state governors calling attention to the Biden administration’s immigration policies. The buses that arrived late Saturday outside the vice president’s residence were carrying around 110 to 130 people, according to Tatiana Laborde, managing director of SAMU First Response, a relief agency working with the city of Washington to serve thousands of migrants who have been dropped off in recent months.

Local organizers had expected the buses to arrive Sunday but found out Saturday that the group would get to Washington early, Laborde said. The people on board included young children, some wearing T-shirts on the coldest Christmas Eve on record for Washington (temperatures hovering around 15 degrees Fahrenheit, or 9 degrees Celsius), according to the Washington Post.

A federal judge in Florida has refused to throw out criminal charges against Andrew Gillum, disagreeing with the former Democratic gubernatorial nominee’s assertions that he was the victim of selective prosecution because he was a Black candidate for governor. Gillum, who is Black, was the Democratic gubernatorial nominee in 2018 and narrowly lost the race to Republican Ron DeSantis. After losing, Gillum still was seen as a rising star in Democratic politics and was hired as a CNN analyst. Then, in March 2020, Gillum was found intoxicated and unconscious in a hotel room with two men, including one who works as a male escort. Two days later he entered a rehabilitation center, and later did a television interview in which he said he’s bisexual.

Gillum and a colleague were indicted earlier this year on federal charges including conspiracy, wire fraud and making false statements to FBI agents. Prosecutors said Gillum funneled donations through third parties back to himself for personal use. According to prosecutors, Gillum met with undercover FBI agents posing as developers while he was mayor of Tallahassee and during his campaign for governor. His associates sought donations from the agents, and suggested ways to provide money without listing them as political contributions, including paying for a fundraising dinner, according to the indictment.

A third case of a defendant who was arrested by an elections police unit created by Florida Gov. Ron DeSantis and the Republican-controlled Florida Legislature has been thrown out. Terry Hubbard, 63, was among 20 people arrested last August on criminal charges of illegal voting in 2020 in what was the ﬁrst major action taken by the Republican’s controversial new Ofﬁce of Election Crimes and Security. A judge in Broward County this week tossed the case on the grounds that the Ofﬁce of Statewide Prosecution does not have jurisdiction to prosecute since it can only prosecute crimes that occurred in two or more counties. Two other cases were dismissed on similar grounds.

The elections police unit drew widespread criticism from voting rights groups who feared it would serve as a political tool for the governor. The arrests of the 20 defendants last August targeted people who were convicted of murder or a felony sexual offense and therefore exempt from a constitutional amendment that restores voting rights to some felons. Most of those charged were from Broward, Miami-Dade or Palm Beach counties, all Democratic strongholds.

DeSantis, a potential 2024 presidential candidate, pushed the state legislature to create the election police unit to address voter fraud concerns that have proliferated in the GOP following former President Donald Trump’s false claims that his reelection was stolen.

A Brooklyn preacher known for his close friendship with New York City’s mayor and a previous stint behind bars was arrested Monday on charges he plundered a parishioner’s retirement savings to bankroll his flashy lifestyle and extorted a businessman by falsely claiming he could lean on city connections to make “millions” together.

Lamor Miller-Whitehead – a Rolls Royce-driving bishop who made headlines in July when armed bandits crashed his church service and robbed him of $1 million in jewelry – pleaded not guilty to charges of wire fraud, extortion and making false statements for allegedly lying to FBI agents by denying he had a second cell phone. The wire fraud and extortion charges each carry a maximum punishment of up to 20 years in prison. An indictment, returned last week under seal and placed in a courthouse vault, was made public ahead of his arraignment Monday. “He will be vigorously defending these allegations,” defense lawyer Dawn Florio said. “He feels that he is being targeted and being turned into a villain from a victim.” Mayor Eric Adams, a former police captain who grew close to Miller-Whitehead while serving as Brooklyn’s borough president, said: “I’ve spent decades enforcing the law and expect everyone to follow it. I have also dedicated my life to assisting individuals with troubled pasts. While these allegations are troubling, I will withhold further comment until the process reaches its ﬁnal conclusion.”

WITH NEW MAP, PENNSYLVANIA ELECTS MOST DIVERSE ASSEMBLY EVER

The number of state lawmakers who are Black, Latino or of South Asian descent will rise as part of what House Democrats call the “most diverse class of freshmen legislators” in Pennsylvania history after candidates ran in this year’s election in a newly drawn map of districts.

Pennsylvania’s Legislature will remain disproportionately White, like nearly every other state’s, according to data from the National Conference of State Legislatures last gathered in 2020. But the once-a-decade process of redrawing district boundaries to reflect demographic trends may have had a greater impact than anywhere else on diversifying the racial and ethnic makeup of the legislature.

“I think that having a fair map made it possible for a more fair expression of the will of the people,” said state Sen. Sharif Street, the state Democratic Party chair. Good candidates matter, too, Street said. The state’s newly elected minority lawmakers are all Democrats, further deepening the disparity with Republicans who have long attracted fewer candidates or voters of color in Pennsylvania and elsewhere

A special grand jury investigating whether then-President Donald Trump and his allies illegally tried to overturn his defeat in the 2020 election in Georgia appears to be wrapping up its work, but many questions remain.

The investigation is one of several that could result in criminal charges against the former president as he asks voters to return him to the White House in 2024. Fulton County District Attorney Fani Willis, who began investigating nearly two years ago, has said she will go where the facts lead. It would be an extraordinary step if she chooses to bring charges against Trump himself.

“Even if he’s acquitted by a jury, for him to face trial and to have a public trial with evidence on the record would be an epic thing for American history,” Georgia State University law professor Clark Cunningham said.

Brittney Griner has asked her supporters in a social media post to advocate for Paul Whelan, a former Marine serving a 16-year prison term in Russia for espionage charges the United States are baseless.

The U.S. had sought to secure the release of both Whelan and Griner – the WNBA star detained at a Moscow airport in February for having vape canisters containing cannabis oil – but Russia agreed to swap only Griner for convicted arms dealer Viktor Bout. Griner returned to the U.S. earlier this month and Bout was sent to Russia.

In a handwritten note posted to her Instagram account, Griner told supporters their letters to her and advocacy for her release had made a big impact, and she asked them to do the same for Whelan, who was arrested in Russia four years ago. She included an address where supporters can send letters to the imprisoned American.