What happened to nearly 400 people buried in Tampa? 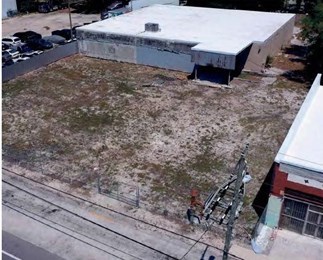 TAMPA, Fla. (AP) – Byron Pressley parked along the side of the road and sat for a few minutes looking out the window of his car.

He got out, walked slowly toward a chain link fence, and asked himself: “Will people watching think I’m crazy?”

Pressley, a church pastor, knelt in front of the fence and prayed. Then he stood, took a breath and sang Jesus Keep Me Near, a hymn popular among African Americans in the decades after slavery was abolished.

There’s no sign today that a cemetery once occupied 2 1/2 acres here, no hint of the squares plotted out on an old map showing nearly 800 graves.

Zion Cemetery, the first African American cemetery recognized by the city, has been forgotten. Acting on a tip last fall, the Tampa Bay Times began examining what became of it.

After reviewing thousands of historic records, and conducting dozens of interviews, reporters identified death certificates for 382 people who were buried at Zion from 1913 to 1920. There were likely many more.

The cemetery was established in 1901 but deaths were not always recorded in an era when no regulations protected graves and when African Americans were treated as second-class citizens.

The Times determined that 13 of the bodies were moved, most of them to two Tampa cemeteries.

No one knows what became of the others. Were they moved, too? Or do they still lie beneath the ground where restaurant trucks and the residents of a half-dozen apartments come and go?

Since 2015, Ray Reed has pored over genealogy websites seeking death certificates for the thousands of people buried three miles to the northeast at Cemetery for All People – known through the years as the Poor Farm Cemetery or the county’s potter’s field.

County records listed only 839 burials at the site, 5901 N 22nd St., and finding more has become Reed’s quest in his retirement from a job with Hillsborough County’s indigent healthcare system.

Reed came upon death certificates for African Americans who had been buried in a place he never heard of, Zion Cemetery. He reached out to the Times.

Neither local historians nor churches linked to Zion Cemetery had ever heard of it, either. A handful of people whose families have lived for generations in Tampa recalled the name, but nothing more.

The Italian Club has no knowledge of a mass reburial.

So the Times reviewed genealogy websites and found 382 death certificates with Zion as the burial site, then compared them with the lists of people buried in Memorial Park and in city-owned cemeteries _ Jackson Heights, Marti/Colon, Oaklawn and Woodlawn.

Three other bodies had been identified in November 1951 when crews building the Robles Park housing project unearthed their caskets. That might have served as a red flag that a larger cemetery had been discovered. But the city told reporters at the time that the Zion graves had been moved in 1925, by someone who purchased the cemetery that year.

There is no indication, in the documents or news archives, that any but those 13 bodies were ever moved. And there likely would be some mention, somewhere, given the time and effort such a sensitive undertaking would require, historians say.

Presented with this research, African American leaders are demanding to know what became of the people buried in the city’s first black cemetery.

“Sadly, I’ll be more surprised if they were moved,” said Pastor Dwayne Gaddis of New St. Paul AME, another church that learned it had ties to the cemetery. “If not, hopefully there is something that can be done to bring proper closure.”

Responsibility for a search lies with the city of Tampa and with the Tampa Housing Authority, owners of the Robles Park housing project, said Yvette Lewis, president of the NAACP in Hillsborough County.