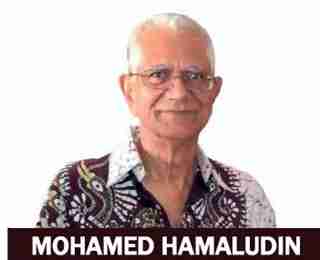 Retired General Colin Powell once offered a comment that is very relevant today, as it was then. Appearing on the NBC program Meet The Press on Oct. 19, 2008, the seasoned military, political and diplomatic leader referred to something he saw in a magazine. “It was a photo essay about troops who are serving in Iraq and Afghanistan. And one picture at the tail end of this photo essay was of a mother in Arlington Cemetery, and she had her head on the headstone of her son’s grave. And as the picture focused in, you could see the writing on the headstone.

“And it gave his awards – Purple Heart, Bronze Star – (and) showed that he died in Iraq (and gave) his date of birth, date of death. He was 20 years old. “And then, at the very top of the head- stone, it didn’t have a Christian cross, it didn’t have the (Jewish) Star of David, it had a crescent and a star of the Islamic faith. “And his name was Kareem Rashad Sultan Khan, and he was an American. He was born in New Jersey. He was 14 years old at the time of 9/11, and he waited until he can go serve his country, and he gave his life.” Powell was speaking during another time of heated political rhetoric, the presidential race between John McCain and Barack Obama. That was also a time of vicious attacks against Muslims — something that both candidates decried. Powell’s advice: “Now, we have got to stop polarizing ourselves in this way.”

Nearly eight years later, the attacks on Muslims have resumed with even greater viciousness, fueled by the murderous tactics of the Islamic State group and the reprehensible campaign rhetoric of Donald Trump. The Republican White House hopeful has proposed banning Muslims from entering the country and his position was echoed by a handful of other Republican candidates during the primary season. Bipartisan criticism did not sway him as he continued to promote an unconstitutional plan. His supporters glory in the false assumption that it is all about “political correctness.”

That is, until last week at the Democratic National Convention in Philadelphia, when Khizr and Ghazala Khan took to the stage to defend the six million or so Muslims living in America, the more than 5,000 who have fought in the U.S. wars in Iraq and Afghanistan and the more than 1.2 billion worldwide.

The Khans are making a passionate plea for the nation to reject Trump’s anti-Muslim demagoguery, citing the heroism of their only child, Capt. Humayun Khan, who, like Kareem Khan, gave his life for his country.

The Khans, Pakistan natives living in America many years, are now locked in a war of words that has the potential for shaping the outcome of the presidential election. But whether it will remains to be seen.

Trump has enough support to keep his candidacy very competitive when it should otherwise not be. And while some Republican leaders have denounced every one of his inflammatory proposals as fast as he makes them, they remain supportive of his presidential bid.

Trump is not their idea of the standard- bearer of their Grand Old Party but they have an existential dread of the Democrat Hillary Clinton winning in November and appointing members of the U.S. Supreme Court and making it liberal for many decades. A refreshed court would almost certainly reverse the many conservative rulings handed down in the past 25 years or so. To stop that from happening they would make a deal with the devil himself.

Powell’s appeal to the nation may have helped temper the anti-Muslim rhetoric of the past decade but it has taken the foreign born parents of a fallen hero to make the case on a national stage. Trump got away with ridiculing McCain for having been captured and tortured during the Vietnam war but with the Khans he has come up against a boundary not to be crossed.

Trump may very well still win the race to the White House but he will be haunted by the ghost of Capt. Humayun Khan every step of the way.