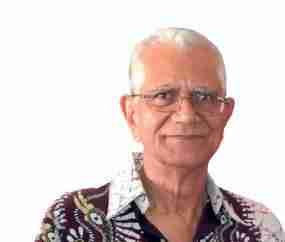 Heartbreaking news coming out of Haiti paints a picture of a nation engulfed by gang violence “which has placed the capital in a state of siege,” the United Nations said in early May, Agence FrancePresse (AFP) reported. The horror includes “beheadings, chopping and burning of bodies and the killing of minors accused of being informants for a rival gang.” Children as young as 10 are subjected to sexual violence, including gang rape. Doctors Without Borders closed its 15-year-old hospital.

The gangs “operate like de facto governments, with their own courts, ‘police stations and residential fees for everything from electricity to school permits,” The New York Times reported. The 11,000-member National Police is much too small for a country of 11 million; experts say at least 30,000 ofﬁcers are needed.

The seeds of this tragedy were, however, planted long ago and there are much more signiﬁcant culprits to blame than just thugs with guns and no regard for life. France and the United States top the list, along with at least two rapacious foreign banks, sundry despots, corrupt ofﬁcials, and catastrophic natural disasters.

It is a story whose very ﬁrst chapter was written long before the creation of the hemisphere’s ﬁrst black republic and the ﬁrst nation to abolish slavery. Christopher Columbus landed at the island that came to be known as Hispaniola – Little Spain – in 1492 and, within 50 years, genocidal colonialism nearly killed off the tens of thousands of native Arawak (or Taino) and Carib. Coffee and sugar plantation owners replaced them with around 800,000 enslaved Africans – about one third of the entire Atlantic slave trade. They, too, did not survive for long, resulting in a complete turnover of the slave population every 20 years, according to the Library of Congress. By 1789, enslaved Africans numbered close to 500,000 and French colonizers 32,000, along with 24,000 mixed race people.

Fierce colonial rivalry and revolts by the enslaved eventually led to Hispaniola’s division into a Spanish-oriented north, now Santo Domingo, and a French-oriented south, Haiti, which declared independence from France in 1804. France dispatched warships and blackmailed President Jean-Pierre Boyer in 1825 to agree to pay compensation for the loss of the territory and the slaves.

Haiti eventually paid $560 million in today’s dollars but the overall cost to the country was between $21 billion and $115 billion – eight times the size of the economy in 2020, The New York Times recently reported. Most of the money was paid by 1874 but foreign loans had to be taken out to pay off the balance. Bankers and their investors took a 40 percent cut off the top of an 1875 loan, notably Credit Industriel et Commercial (CIC), which was founded in 1859, went on to help ﬁnance the construction of the Eiffel Tower and is now a $355 billion subsidiary of a major European ﬁnancial conglomerate.

The National City Bank of New York – today’s Citigroup – bought all the shares of Haiti’s National Bank and backed by the U.S., loaned even more money, ending up controlling almost all of the country’s foreign debt. Responding to calls by American business interests led by the National City Bank, the U.S. sent in the Marines in December 1914, took control of the country and transferred $500,000 in gold to New York.

By 1911, $2.53 of every $3 in coffee taxes, the most important source of revenue, went to paying debts held by French investors, The Times reported. Twice-elected President Jean-Bertrand Aristides, at an April 7, 2003, public gathering, talked about the ransom and demanded that France repay the money. “What beautiful schools, universities and hospitals we will be able to build for our children,” Aristides declared. “How much food we will have in abundance!” In response, the U.S. a year later colluded with France to force Aristide into exile under cover of night, ending his second term in what France’s ambassador to Haiti admitted to The Times had been “a coup.” The French presented the U.S. with the Statue of Liberty on July 4, 1884 but refused to acknowledge the injustice of the Haiti “indemnity.”

The United Nations which, following disturbances that ousted Aristide during his ﬁrst term, authorized the deployment of a multinational force which restored him to ofﬁce. In April 2004, the U.N. sent in a Stabilization Mission of 6,700 troops and 1,622 civilian police. But U.N. peacekeepers sexually exploited women and children as young as 11 in exchange for money and food, in some cases fathering children who were abandoned. Peacekeepers also accidentally contaminated drinking water, causing an outbreak of cholera that killed thousands of Haitians.

Then there is the racism across the border. Dominican Republic regarded Haitians as a source of very cheap labor but refused to grant them and even their Dominican-born children ofﬁcial status. Those with Haitian roots, once estimated at up to one million, were regarded as “in transit,” no matter how long they lived in the country, The Atlantic reported. In October 1937, the dictator Rafael Trujillo ordered an attack that killed between 20,000 and 30,000 Haitians in the Parsley Massacre — so called because Haitians were identiﬁed for slaughter when they mispronounced “perejil,” Spanish for the herb.

The U.S. refused to recognize Haiti’s independence for 70 years, fearing that an independent nation of former slaves was a very bad example for its own enslaved population. But, since at least 1973, the U.S. has been a generous aid donor. And, recently, New York Congressman Gregory Meeks, who chairs the House Foreign Affairs Committee, sent a letter signed by 69 lawmakers to the State Department calling, among other things, for expanded sanctions on Haitians involved in human rights abuses, appointment of a special representative and investigating those smuggling guns to the gangs.

At a time of laser focus on Ukraine, that is a welcome move, though far from enough, to help Haiti, from which, in October 1779, more than 500 free blacks joined American colonists and French troops in an unsuccessful push to drive the British from Savannah, Georgia, during the Revolutionary War – never mind that it took more than 200 years for a monument to be dedicated in their honor.

Next post Second probable case of monkeypox found in Chicago