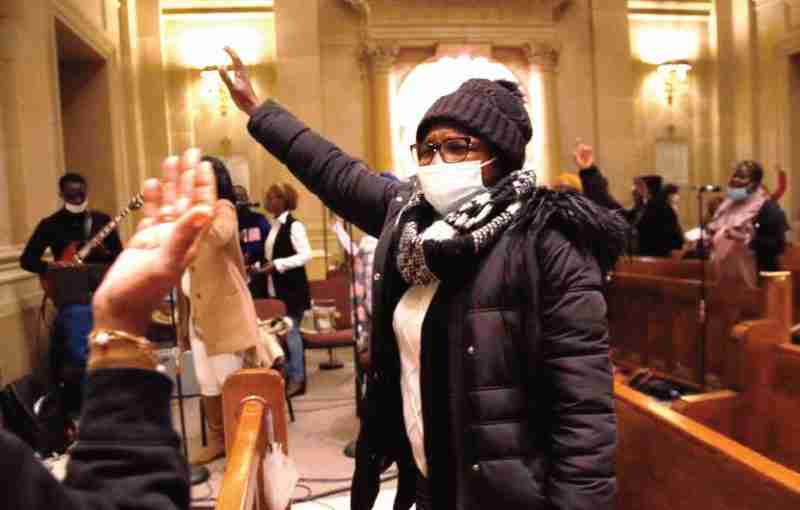 New York (AP) – When Landry Felix Uwamungu Ganza moved to New York from Rwanda last August, the Columbia University freshman searched for sanctuary, a sacred place to carry out his Sunday morning rituals just as he had back home.

He ventured into the nearest Catholic parish, the Church of Notre Dame in his new city’s Morningside Heights neighborhood, and to his surprise, he found the familiar rhythms of Mass being celebrated in French – a language he grew up hearing from the pulpit. “It was more relatable to what I know from home,” he said.

The French language is rooted in the history of the New York City church – founded as a chapel in 1910 by French missionaries from the Fathers of Mercy. Immigrants from France who lived on the Upper West Side in the early 20th century once ﬁlled Notre Dame’s pews. Today, it is African Catholics worshipping at the French service, one of the three languages its priests celebrate Mass in on Sundays.

The language unites the parishioners – a diverse African diaspora living in the city and neighboring states, many of whom are from former French and Belgian colonies in West and Central Africa, such as Senegal, Ivory Coast, Mali, Togo and Congo.

“The African community here come from different countries with their own languages, so French is really important to bring them all together as their common language,” said the Rev. Michael Holleran, the assistant pastor, who learned French as a Carthusian monk in France.

Although the Catholic rituals are the same, regardless of language, for many the ability to worship in French is spiritual.

“For me it is better to understand the Scriptures, the Gospel, and I feel more fulﬁlled spiritually when I am in the French community,” said Monique Degny-Oulai, a longtime parishioner originally from Ivory Coast.

Uwamungu Ganza feels most at ease attending his new parish’s French Mass even though he is fluent in English and Kinyarwanda, the common language in Rwanda, and is particularly fond of the choir.

“They sing songs that I know so I feel like I connect more,” he said.

The French Mass’ strength, Holleran believes, lies in its multinational choir, the Chorale Sainte Marie Reine. Sylvestre Kouadio, a self-taught musician who leads it, infuses the rhythms and styles of African musical traditions like highlife and coupe-decale into new songs and existing hymns.

“The music and the lyrics are very vibrant and lively and very devotional,” Holleran said. “It really gives the tone for the whole Mass. The Mass will be completely different without them.”

The choir, founded in 1998 at the now-closed St. Vincent de Paul Catholic Church in New York’s Chelsea neighborhood, transferred to Notre Dame in 2013 along with the shuttered parish’s members. The influx from St. Vincent de Paul prompted church leaders to revive Notre Dame’s long-suspended French service, earning the designation of the ofﬁcial French Mass of the Archdiocese of New York.

“This place, we call it a second home away from home,” said Kouadio, who is from Ivory Coast. “Your relationship to God is something that you want to be able to speak to him, understand, and feel comfortable.” ALSO GO TO ENGLISH

Not only does it provide community and comfort, but a sense of home as well, said Solange Kouakou, who also is from Ivory Coast and sings alto in the choir. She commutes in on Sunday mornings from New Jersey.

“When we come, it feels like our country. When you see your community, you feel welcomed,” she said.

Despite the preference for the French Mass on Sundays, some parishioners, especially new arrivals to the U.S., also go to English Mass other days of the week for practical reasons as well as spiritual ones.

“On Saturdays, I go to an English Mass to listen and improve my English,” said Jean-Paul Gomis, who came to the U.S. from Senegal two years ago.

Charlene Goncalves, who met her

boyfriend at Notre Dame, is now fluent in English but feels the most spiritually fulﬁlled when she practices her faith in French. “I have been raised and learned all the prayers in French, so for me, it just makes sense to go to a church that speaks my native language,” said Goncalves, who is of Cape Verdean descent but grew up in Paris.

“The only thing I cannot do in English is pray.”

Next post Andrew Young still leading at 90, and peace is still the way