Black and white churches in Macon work to heal divide 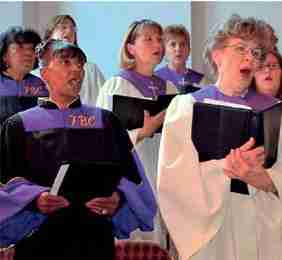 MACON, Ga. – There are two First Baptist Churches in Macon – one black and one white. They sit almost back-to-back, separated by a small park, in a hilltop historic district overlooking downtown. “We’re literally around the corner from each other,” said the Rev. Scott Dickison, pastor of the white church.

About 170 years ago, they were one congregation, albeit a church of masters and slaves. Then the fight over abolition and slavery started tearing badly at religious groups and moving the country toward Civil War. The Macon church, like many others at the time, decided it was time to separate by race.

Ever since –through Jim Crow, the civil rights movement, desegregation and beyond— the division endured, becoming so deeply rooted it hardly drew notice. Jarred Moore, whose family has belonged to the black church for three generations, said he didn’t know the details of the history until recently.

“I thought, `First Baptist, First Baptist?’ There are two First Baptists right down the street from each other and I always wondered about it,” said Moore, a public school teacher.

Then, two years ago, Dickison and the pas- tor of the black church, the Rev. James Goolsby, met over lunch and an idea took shape: They’d try to find a way the congregations, neighbors for so long, could become friends. They’d try to bridge the stubborn divide of race.

They are taking up this work against a painful and tumultuous backdrop: the massacre last year at a historic black church in Charleston, South Carolina; the much-publicized deaths of blacks at the hands of law enforcement; the rise of the Black Lives Matter movement, and the sniper killing of white Dallas police officers. These events, and the tensions they have raised, have become part of the tentative new discussions among congregants at the two First Baptists.

“This is not a conversation of blame, but of acceptance and moving forward,” said Goolsby, sitting in the quiet sanctuary of his church on a Monday morning. “What will govern how quickly we move is when there’s a certain level of understanding of the past.”

The South is dotted with cities that have two First Baptist Churches.

In the early 19th century, before the Civil War, whites and blacks often worshipped together, sharing faith but not pews; blacks were restricted to galleries or the back of the sanctuary. Eventually, black populations started growing faster in many communities. Whites, made uneasy by the imbalance, responded by splitting up the congregations.

This was apparently the case for First Bap- tist in Macon.

In 1845, church leaders bought property a block away, as “a place and habitation for the religious service and moral cultivation and improvement of the colored portion” of the congregation, according to the deed. A building was quickly erected and the black church opened.

That was a year when tensions between anti- and pro-slavery Baptists boiled over nationwide, leading Southerners to break away and create their own denomination, the Southern Baptist Convention, which upheld slavery as ordained by God. The white Macon congregation, known as the First Baptist Church of Christ, became Southern Baptist.

Whites maintained oversight of the black church as required by Georgia law at the time for fear of slave rebellions. But after the Civil War ended in 1865, the white church fully severed ties. The two First Baptist Churches stayed that way, just steps from each other but apart, ever since.

When Goolsby last year told the black church of the plan to work with the white congregation, people applauded. White congregants were enthusiastic as well. Yet, it was excitement mixed with some apprehension, since the effort would inevitably require “some challenging conversations,” Dickison said.

“It’s hard to talk honestly about race,” said Doug Thompson, a member of the white church and also a Mercer University professor who specializes in religion and race. “It’s always hard to help people move forward.”

The two churches’ first activity together was modest but symbolically significant. For years, each church held its Easter egg hunt in the same tree-shaded park behind their churches, but at different times. Last year, they met there together. Photos from the joint gathering show children huddled together for a group picture, grasping pink, blue and yellow baskets, black faces and white faces squinting into the sun.

Previous post Stained-glass windows could become thing of the past