Stained-glass windows could become thing of the past 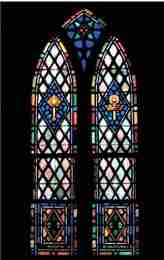 ADDISON, Mich- Stained-glass windows in churches are becoming a dying art because of changes in federal regulations regarding the use of heavy metals such as lead.

Richard Hanley is president of Omnibus Studios, which crafted and installed three windows at the 130-year-old Addison Congregational Church on Thursday. He told MLive that it’s more difficult and expensive to build windows under the Environmental Protection Agency new regulations. Hanley said the EPA is concerned about metals going into the air as they are heated to the point of vaporization.

Hanley said the glass used in the new windows is from Indiana, Washington, West Virginia and Germany. Each window costs about $20,000.

“It is very traditional, European-style work, with traditional techniques and cutting,” he said. “The people cutting like this have been doing it for 10-plus years.”

Hanley said three people spent “hundreds of hours” making the glass paintings. “There was color rendering for the approval of the pastor, then we made the patterns by hand,” Hanley said. “We take the original drawings and digitally blow them up, then put drawings on the light frame, then go back and refine them by hand.”

The Rev. Kevin Duffy said the new windows supplement the church’s original stained-glass window from the early 20th century. “We had just built an addition that is a year old,” Duffy said. “The slots were originally exterior windows, and we really prayed that we would have something of this nature to come in here, but never imagined something of this level.”