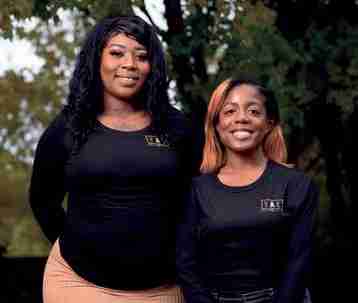 Greenville, S.C. (AP) – The nationwide protests against racial injustice in 2020 were a call to community action for Greenville natives DeAsia Danladi and Tailor Pickens.

They responded by launching Young Afro Excellence (YAE), an organization that seeks to provide young minorities with the help they need to reach their full potential, through any adversity. YAE provides a mentorship program for 12 to 24-year-olds, but it also works to uplift the community through events, business grants and scholarships.

So far, YAE’s events have included a Black History Vendor Expo that awarded business grants, a Mother’s Day brunch and a donation drive for diapers and baby clothes for mothers in need.

“There’s a lot of adversity especially in Greenville; that’s what we’re here for,” said Pickens, 23. “We’re here to help people, especially people who are underprivileged.”

Danladi, a 24-year-old assistant manager of a ﬁnance company, conceived the idea of YAE in the midst of widespread protests and marches that followed the death of George Floyd at the hands of a police ofﬁcer in Minneapolis, Minn. on May 25, 2020.

She longed to help steer positive change. But, when it comes to marching, “You can’t do the same thing over and over again and expect different results,” she said.

“If you start with one generation and try to build them up, it makes it easier for other generations to kind of understand how to reach a level of success,” she said.

What Danladi and Pickens offer through YAE is partly inspired by what they gained as mentees in Delta GEMS. The program run by Delta Sigma Theta Sorority offers African-American adolescent girls “a road map for college and career planning through activities that provide opportunities for self-reflection and individual growth.” Just as the hope is for YAE, Delta GEMS filled a need, Pickens said.

“There were some resources that weren’t available at the schools,” she said. “But with Delta GEMS, I learned a lot. We’re doing the same thing for young girls.”

During a teaching session, Pickens’ mother, a psychotherapist, talked to the youths about mental health – how to deal and cope with stress and depression, Danladi said. She also gave out journals for the girls to use to express their feelings, she said.

Danladi taught a session on credit and spoke to the girls about “some real stuff, a lot of things people won’t tell you in high school,” said Pickens, who works for an insurance company and is pursuing her insurance license.

Danladi and Pickens were high school students when they met while in Delta GEMS. Danladi said she sought out Pickens to partner with partly because of her personality. Pickens, an extrovert, is always motivated, Danladi said.

Pickens, who describes herself as an advocate, participated in the Black Lives Matter marches in Greenville and Columbia in 2020. She had taken a break from owning a cosmetic business and didn’t hesitate to say “yes” when Danladi approached her with the idea for YAE.

Danladi and Pickens said their events have been mostly selffunded.

“We have gotten some donations, but it’s here and there,” Danladi said. “It’s not continuous, or enough to do what we really want to do.” YAE officially became a 501c3 nonprofit organization in late 2020. Danladi and Pickens hope the status will not only help spur more donations, but also attract more sponsors for the 2022 Black History Vendor Expo.

This event is planned for June 18 at the Phillis Wheatley Center.