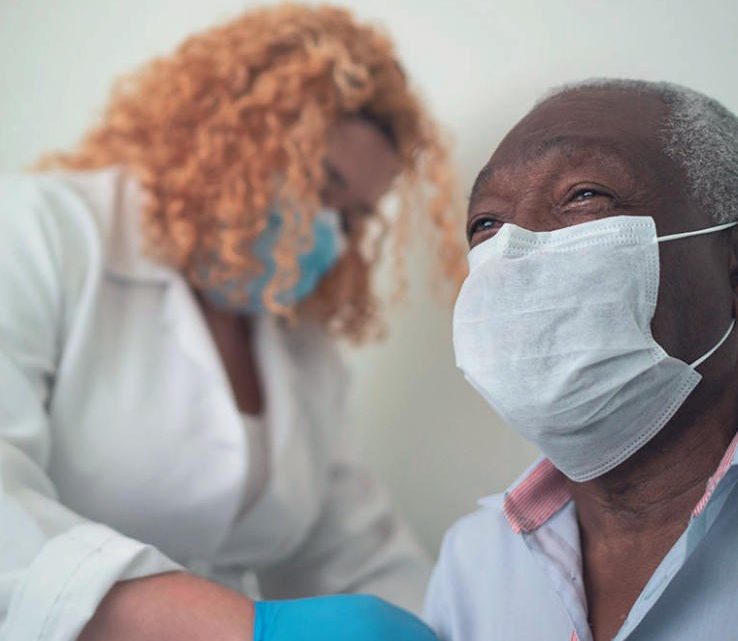 LOS ANGELES (AP) – Inside hospital rooms across America, where the sick are alone without family to comfort them, the grim task of offering solace falls to overworked and emotionally drained hospital chaplains who are dealing with more death than they’ve ever seen.

Last week nearly a dozen died on a single day at the 377-bed Providence Holy Cross Medical Center, a gleaming, modern medical facility that is tucked into the northwest corner of Los Angeles’ San Fernando Valley. Three more passed – within a span of 45 minutes – the next day.

As he has each day for the past 11 months, Chaplain Kevin Deegan sits with the sick and dying, clad in a facemask, face shield, gloves and full body cover. He prays with them, holds their hands, gently brushes their foreheads and reassures them there is nothing to fear.

Grieving families, unable to enter the hospital because of the deadly virus, watch through the iPad he’s carried into the room with him.

“All right, Miss Leticia, it’s Chaplain Kevin. We’re going to say some prayers now. Ok, my dear?” “She can hear you,” he tells her son, Jayson Lim, urging him to talk to her. “Yo, Ma,” Lim manages to say before breaking down in tears and burying his head in his hands. Later he’ll pray with her.

“WHAT A MIRACLE IS”

Deegan, who ministered to people undergoing hospice and palliative care before joining Holy Cross two years ago, is no stranger to death. But still, he says, he and his fellow chaplains had seen nothing like this before COVID-19 struck last year and began to kill people by the hundreds of thousands. Close to 400,000 people have died in the U.S. alone.

Holy Cross is filled with so many COVID-19 patients that it has had to double up some people in intensive care rooms and put others in areas normally reserved for outpatient care and patient recovery. A makeshift area at the end of a hallway has even been turned into a hospital room.

Deegan and about a dozen other chaplains cover shifts that extend to 24 hours a day, seven days a week. As Chaplain Anne Dauchy prays for a woman during her last moments, the patient’s loved ones watching through Dauchy’s iPad can be heard sobbing in the background and saying words like, “I love you so much, Mamma” and “Thank you for everything.’” “We try to kind of reframe what a miracle is,” an exhausted Dauchy says afterward. “Sometimes it’s living another day, sometimes it’s a patient opening their eyes.

“Perhaps that’s the miracle, that she’s at rest and at peace and not suffering anymore,” she says of the woman who died.

When asked how he, Dauchy and the others manage to survive the turmoil emotionally, Deegan replies, “That’s a good question. I have to be honest. I don’t know.”

What he does know is when he saw doctors, nurses and other hospital staff risking their own lives to do everything they could to save others he felt he had to be there, right in the room with them, to offer comfort and be a surrogate for their loved ones who couldn’t be there.

He was sure he’d eventually be infected as COVID-19 patients began pouring into the hospital every day. So far he has not, and just last week he had his second dose of the vaccine.

“Who knew PPE really works,” he said with a chuckle during a rare lighthearted moment as he discussed the personal protective equipment he dons each day before work.

On that Monday when 11 people died, including three he personally ministered to, Deegan went home and, after he tried to fall asleep, saw the faces and again heard the voices of the people who had sobbed and screamed at him, “Why? Why? Why?” Some families lash out at the chaplains, looking for someone to blame, said Monica Pantoja, a clerk at the hospital’s intensive care unit who has been isolating at home after becoming infected herself.

“They take a lot of heat and people don’t understand that they’re doing the best they can. I think their prayers mean more than anything to families,” Pantoja said, speaking from first-hand experience.

When her 72-year-old mother was hospitalized for three months with COVID-19, including several weeks on a ventilator, a chaplain called every day to put her on the iPad with her. Her mother is now recovering at a rehabilitation center.

There are other occasional victories as well.

As Deegan prayed with another patient last week he encouraged her loved ones to talk to her through the iPad, and when one shouted, “Hi Mom,” the woman, on oxygen, opened her eyes wider, raised her head slightly and tried to reply, although the words wouldn’t come. “Who is that?”, Deegan asked her. “Is that Marvin?” She nodded.

Later, when he stepped out of the hospital, he found Leticia Lim’s son Jayson waiting by the door to thank him as his mother continued her fight to live.

“It was painful and at the same time it was heartwarming because I had the chance to pray with my mom, with the pastor,” he said before turning to Deegan to tell him, `Thank you, God bless you.’”

“You’re bringing tears to my eyes, ” Deegan said as he removed his glasses to wipe the tears away before pausing to remember once again why he shows up every day.

Next post Black women: Unparalleled pioneers in world of fashion