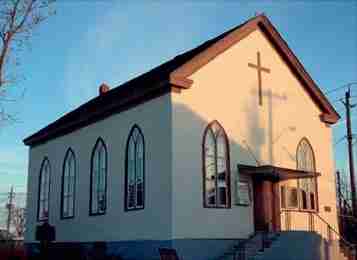 A century and a half ago, a new Canadian church gave fleeing slaves a place to worship. Now the sanctuary that welcomed Underground Railroad conductor Harriet Tubman and other escapees needs help itself.

The dwindling membership of Salem Chapel, a British Methodist Episcopal (BME) church just north of Niagara Falls, has started a crowdsourcing campaign in hopes of raising $100,000 – the equivalent of $77,486 in U.S. currency.

The congregation wants to shore up the building, which is in an area where heavy traffic has contributed to its shifting foundation.

Dedicated in 1855 by runaway slaves and free blacks, the church needs cable wires to secure the log frame of the building ahead of expected nearby construction and wants to replace parts of the building that are deteriorating or damaged.

Salem Chapel is in St. Catharines, Ontario, a spot known as an end point of the Underground Railroad, the multipronged clandestine route through which slaves escaped to freedom. Some of the people Tubman helped escape became members of the church.

Rochelle Bush, one of the 11 remaining members who launched the campaign, is the great-great-great-granddaughter of the Rev. James Harper, who was the minister in charge of the congregation when Tubman attended and when it changed its affiliation from the African Methodist Episcopal Church to BME.

After the Civil War, the church, which began with 195 members, began to dwindle as members returned across the border, decreasing to about 40 in 1970.

Most of its members now are age 80 and older.

The congregation, which continues to meet for worship each Sunday with a pastor and a pianist, has been sustained by tourists, who increased from about 2,500 annually to 4,000 this year, Bush said.

Visitors pay a $5 admission to learn about “the who’s who in the abolitionist movement” – including Frederick Douglass and John Brown – who visited the church.

“That’s what helps us keep the church doors open and it pays the bills throughout the winter season,” she said.

But now, the church’s members say they need more assistance to keep their building available for future generations.

“(W)e want to ensure that it continues to serve as a religious institution and because it is an important treasure in North American history,” they said.

To donate to the Salem Chapel, visit www.gofundme.com/preserving-salemchapel.

Please Note: This article has been slightly edited for brevity and clarity.

Next post Part II: The history of African American death