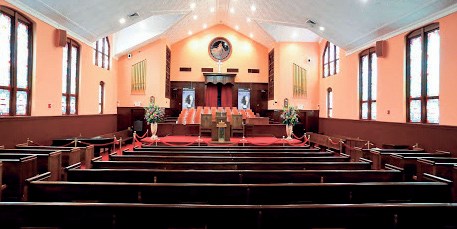 Atlanta (AP) – For decades, the red-bricked Gothic Revival church where the Rev. Martin Luther King Jr. once preached has been a monument to the history of Black Americans’ fight for civil rights and the legacy of an activist icon.

I. t took a high-stakes Senate race and a Trump-era cultural debate to thrust Ebenezer Baptist Church into the center of the current political debate.

On Wednesday its senior pastor, the Rev. Raphael Warnock, won in one of two Senate runoff elections that could decide which party ultimately controls Congress in the first years of the incoming administration of President-elect Joe Biden. But Warnock’s preaching has become a focal point in the debate about race and justice in the election.

His opponent, Republican incumbent Kelly Loeffler, ran attack ads using snippets of sermons Warnock preached from Ebenezer’s pulpit to accuse him of being a far left, radical socialist who doesn’t support police officers or military service members. For King’s former church, the intense spotlight isn’t new. Its 6,000 members are accustomed to standing-room only Sunday services, due in large part to the out-of-town visitors who flocked to the church. Still, Loeffler’s criticisms renewed attention on a pillar of Black life in Atlanta and a tradition of political activism it represents.

“The Republican attack is not just against Warnock, it’s against the Black church and the Black religious experience,” said the Rev. Timothy McDonald III, pastor of First Iconium Baptist Church in Atlanta who served as assistant pastor of Ebenezer from 1978 to 1984.

McDonald describes Warnock’s views as consistent with the church’s opposition to racism, police brutality, poverty and militarism. Loeffler’s attacks included selectively edited portions of Warnock’s sermon in which he decries “police power showing up in a kind of gangster and thug mentality,” as a criticism of law enforcement practices that have historically driven a wedge between departments and Black residents.

“I don’t care what you think about Warnock,” he said. “We’ve got to defend our church, our preaching, or prophetic tradition, our community involvement and engagement. We’re going to defend that.”

Ebenezer is “Black America’s church,” McDonald added. ”It’s bigger than any individual.” Loeffler has responded, saying in a tweet last month that she isn’t attacking the Black church. “We simply exposed your record in your own words,” she wrote in a reply to Warnock.