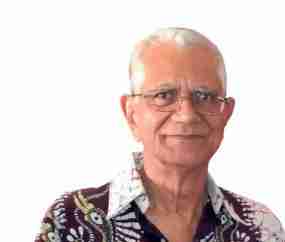 Forty-four nations meeting in July ‘44 in Bretton Woods, New Hampshire, established the International Monetary Fund (IMF) as part of a plan to promote international cooperation after World War II. The IMF soon became the go-to institution for former colonies seeking ﬁnancial assistance — and was quickly denounced as imposing predatory conditions for vetting applications for loans from banks and private lenders.

The terms have included Gross Domestic Product (GDP) targets which many states cannot satisfy without ﬁring thousands of workers in the public sector – usually the main employer – and privatizing state assets. The goal is to rein in supposedly reckless spending but the effect has been to dictate the politics of borrower nations. The terms often spark widespread popular unrest, regime change and dictatorship. Some borrowers ﬁnd themselves trapped in perpetual debt, sometimes having to borrow more just to pay the interest on loans. That leaves them with little resources for economic development as they struggle still to emerge from the trauma of colonialism and, more lately, cope with the impact of natural disasters such as major hurricanes.

Mia Mottley, prime minister of Barbados, decided four years ago to make her 166-square-mile country of just 290,000 people the poster child of this new form of exploitation. Al Jazeera’s senior environment reporter Abrahm Lustgarten tells the story in a 10,500word article published on July 27 in partnership with The New York Times Magazine. It began in 2013, when Barbados owed $8 billion and could not qualify for further loans. Mottley decided to default on repayments and force lenders to modify their terms. She sought an ally in the IMF’s managing director, Christine Lagarde, who took a call from Mottley May 31, 2018, and expressed sympathy for her point of view.

That was a good sign because banks and private lenders would listen to Mottley only if Barbados was participating in a formal IMF program for economic reform. Mottley wanted Lagarde to endorse “an economic program that would still allow her to raise salaries of civil servants, build schools and improve piping and wiring for water and power,” Lustgarten reports, and told Legarde, “Before you carry people on a long journey, you have to give them a little breakfast.”

Mottley argued for loan terms to include a disaster clause that acknowledged the economic damage from hurricanes. The IMF had already noted that about two-thirds of the 511 disasters small countries suffered since

1950 had taken place in the Caribbean, disrupting economic development and killing more than 250,000 people, Lustgarten notes. The islands “carry more debt, relative to the size of their economies, than almost anywhere else on the planet, a ﬁscal burden that makes it virtually impossible for them to pay for the infrastructure necessary to protect them from the climate disruptions to come.”

Barbados itself had the third-highest debt per capita globally in 2017 and was spending 55 percent of its GDP annually just to pay loans, “much of it to foreign banks and investors, while spending less than ﬁve percent on environmental programs and health care,” Lustgarten writes. As a whole, since 1980, hurricane recovery had taken up more than six months’ worth of economic activity in 14 Caribbean states and more than the average annual GDP growth of ﬁve of them.

Mottley won agreement in 2019 for the inclusion of a disaster clause for a loan that made the country “the largest issuer of bonds with hurricane clauses in the world,” Lustgarten writes. But the plan was contingent on a six percent GDP growth annually. Then COVID-19 struck, as did Hurricane Elsa on July 2, 2021, which, at Category 1, was just short of the magnitude to trigger the disaster clause. The result was that, instead of a surplus, Barbados’ GDP registered a two percent deﬁcit. The IMF, however, insisted that Barbados would still have to produce a six percent surplus.

Mottley’s ofﬁce said she is unavailable for media interviews until late August but Lustgarten writes that she is convinced that the international ﬁnancial system is “as fundamentally unjust” as was slavery and colonialism and that “just as outsiders once pillaged the Caribbean for wealth created by the hands of slaves, investors in those former imperial powers now squeezed former territories for their assets, for access to markets, for interest on loans.”

Lustgarten does not say whether Mottley plans to press for the legacy of colonialism to be considered for IMF sanctioned loans. If she does, she will have a strong case. Britain started the slave plantation system on the island nearly 400 years ago. Between 1627 and 1833, some 600,000 enslaved Africans were taken to the island. Their life expectancy was less than 10 years and eventually 250,000 Barbadians perished. The British government abolished slavery in 1833 and paid slave owners roughly $17 billion in today’s currency but nothing to the formerly enslaved. They were required to continue to work for free as “apprentices” for decades or were barred from living on the plantations, which occupied most of the island. Mottley told Lustgarten, in his words, that “it extended the system of sugar and exploitation that powered the modernization of Britain and its boom in banking, shipping and insurance.”

But if Mottley tries to push for a reparations clause for loans, she will face the reality that lenders are interested in making proﬁts, not righting past wrongs. But she is not alone in pointing to the exploitation of the past. The Caribbean Community (CARICOM), which includes Barbados, created a CARICOM Reparations Commission (CRC) in 2013 and others have taken up the cause, including in Africa and the United States. Mottley believes, Lustgarten writes, that “impoverished Caribbean islands have delivered wealth to larger powers for centuries and today is no exception. Before, it was risky commodity ventures that made great fortunes. Now it is increasingly the risk itself. Trafﬁckers in debt offer money that is desperately needed.

“By taking on the risk that these tiny nations will default, they proﬁt handsomely — and if the risk gets to be too high, they can pass the debt on at a discount to more adventurous investors. That’s the nature of ﬁnance. But the climate crisis is raising the risks considerably, and in so doing, it is once again binding the destiny of these fragile nations to the speculative will of faraway powers. Post-colonialism barely had a chance to take hold before it gave way to climate colonialism.”

That inequality can be greatly reduced if the former colonial powers pay reparations for slavery and colonialism. It is a decades-old global demand and the total could run into tens of trillions of dollars. But if only a part of that is paid, it could change the economic dynamics of Barbados and other former colonies and help them escape the debt trap. But they should not hold their breath waiting for it to happen.