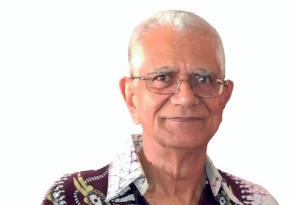 Joseph Stalin, while just a commissar, once stated: “If only one man dies of hunger, that is a tragedy. If millions die, that’s only statistics.” As Soviet Union leader, Stalin created the Great Famine (the Holodomor) in Ukraine in which up to 10 million people starved to death, about 25,000 every day, in 19321933.

Frenchman Jean Rostand, in his 1939 book “Thoughts of a Biologist,” wrote, “Kill one man, and you are a murderer. Kill millions of men, and you are a conqueror. Kill them all, and you are a god.” Even before then, there has been no shortage of men seeking such deiﬁcation. They have killed tens of millions of people and driven out millions more to foreign countries that do not want them to live in abject poverty.

Polish attorney Raphael Lemkin coined the word “genocide” in 1944 after studying the Ottoman Empire’s massacre of Armenians and the Nazis’ killing of Jews. “Genocide,” Lemkin wrote, “does not necessarily mean the immediate destruction of a nation, except when accomplished by mass killings. It is intended rather to signify a coordinated plan of different actions aiming at the destruction of essential foundations of the life of national groups.”

The world has witnessed both mass killings and other forms of ethnic cleansing as homicidal maniacs try to cling to power.

In Africa, the regime of Nobel Peace Prize laureate Abiy Ahmed is bent on erasing the identity of the Tigrayan community. Refugees “arrive in heat that soars above 100 F, carrying the pain of gunshot wounds, torn vaginas, welts on beaten backs. Less visible are the horrors that jolt them awake at night: Memories of dozens of bodies strewn on riverbanks. Fighters raping a woman one by one for speaking her own language. A child, weakened by hunger, left behind,” the Associated Press reported.

In the Democratic Republic of Congo, up to six million people have died, half of them children under 5. Thousands have died in Cote d’Ivoire (Ivory Coast). One million, mainly Tutsis, were slaughtered in Rwanda in 100 days in 1994. More than 480,000 people perished and three million were displaced in Sudan, especially in the Darfur region, in 2003. Germany slaughtered 65,000 or 80 percent of the Herero tribe and 10,000 or 50 percent of the Nama tribe in Namibia in 19041909

In Asia, Myanmar’s military killed 25,000 Rohingyas and forced out more than a million. The Khmer Rouge killed one in every four citizens in Cambodia – up to two million – in 1975-1979. China has launched a “re-education” campaign which has incarcerated a million Uyghurs in detention camps. The New Yorker’s Rafﬁ Khatchadourian has provided an astonishing account, focused on Amar Sabit, one of the ﬁrst victims, detained for 20 months. India is downgrading the status of its Muslim citizens, 15 percent of the population. In Europe, Germany killed six million Jews during the 1940s. Around 200,000 people were killed in Serbia’s assault on what became Bosnia-Herzegovina. The continent continues to persecute the Roma, derogatorily called Gypsies. In Latin America, Argentina “disappeared” tens of thousands of citizens. More than 200,000 people — 85 percent of them indigenous Mayans — perished over 36 years in Guatemala and 40,000 were disappeared.

In the Middle East, the Ottomans massacred 1.5 million Armenians during World War 1. The Islamic State killed or captured 10,000 Yazidis within days of its attack on Iraq’s Sinjar Mountain in 2014, forcing at least 3,000 women into sexual slavery. Saudi Arabia and the United Arab Emirates launched an aerial war in 2015 against Yemen’s Houthi rebels that has killed 56,000 and pushed half the 28 million population into starvation; 85,000 children starved to death over three years.

Massacres, expulsions, human trafﬁcking, use of child soldiers and rape – especially rape — have been the perpetrators’ tactics of choice with a horrifying sameness.

The United Nations adopted the Convention on the Prevention and Punishment of the Crime of Genocide in 1948 to discourage “acts committed with the intent to destroy, in whole or in part, a national, ethnic, racial or religious group.” The convention has since been ratiﬁed by 152 countries, including the United States which just over 100 years earlier slaughtered Indigenous peoples and forced 100,000 to make a 5,045-mile trek in what became known as the Trail of Tears, during which 4,000 died.

The Security Council, on Nov. 8, 1994, went further, creating the International Residual Mechanism for Criminal Tribunals to prosecute the genocidal maniacs. But the United Nations has appeared powerless to prevent genocide or ethnic cleansing. One reason could be that 42 states have not ratiﬁed the convention: 9 in Africa, 17 in Asia and six in the Americas. Another obstacle is selective action by super powers based on their foreign policy imperatives, at times seeming to encourage civil unrest in smaller states so they will be too busy killing themselves off to pose a threat to their former colonial masters. Then there is the principle of non-interference in the internal affairs of member-states.

World Without Genocide, which Ellen J. Kennedy founded about 11 years ago at the Saint Paul, Minn.based Mitchell Hamline School of Law, where she is an adjunct professor, is trying to get the word out. Its vision is for “a future in which genocide and other mass atrocities perpetrated against innocent people based solely on who they are will disappear from the earth.”

It is a glorious ideal, though unrealistic because too few people show active interest in the plight of the “wretched of the earth,” to borrow the name of Franz Fanon’s 1961 book. Not enough people have shown the determination of the late Wisconsin Senator William Proxmire, who made 3,211 speeches in the Senate over 19 years to force U.S. ratiﬁcation of the United Nations anti-genocide convention in 1988.