HIDDEN FIGURES: Remembering the Hidden Mothers in Our Family 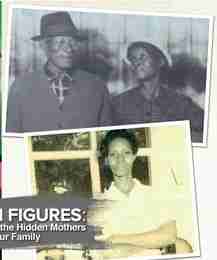 By BROOKE AND BREANNA BENNETT

During the Kwanzaa holiday, our father took us on a Daddy-Daughters date. He suggested having lunch and watching “Rogue One: A Star Wars Story,” but we preferred to see “Hidden Figures,” the new movie about the Black women mathematicians who helped Astronaut John Glenn orbit the earth. Daddy agreed that this was a better choice.

As we watched the movie, and even for days afterwards, we thought about how wonderful it was that all kinds of Americans worked for

NASA during the time when segregation was the rule. There is still plenty of segregation in today’s society, but it was widely accepted by everyone in the old days.

Leaders at NASA seemed to be more interested in a person’s unique scientific and mathematical knowledge and creativity than the color of their skin. Sounds like a good place for us to train! We were impressed that Katherine Johnson, Mary Jackson and Dorothy Vaughan used their brilliance to outperform, and outwit others. Instead of complaining, they took action to accomplish their goals of earning an engineering degree, becoming a supervisor and attending closed-door meetings where major decisions were made. We want to be just like that when we grow up.

Did you know that anyone (Black or white, male or female) could calculate numbers quickly and accurately in their heads? We didn’t know that! We were fascinated when we saw the actress playing Katherine Johnson calculate figures so quickly. She didn’t even use a calculator!

Last year, when we attended school in America for the first time, we found math to be quite challenging. We have been working super hard mastering math strategies, and look forward to the day when we, too, can calculate hidden figures in our minds.

“Hidden Figures” made us think about the women in our family who were also hidden. Our father’s maternal grandmother, Annie Lee Hawthorne Pope (everyone called her “Sweets” because Daddy said she always gave him sweets), had a bachelor’s degree in Home Economics from Paine College in Augusta, Georgia, and worked as a librarian. Yet, she earned less money than our great grandfather, Willie Pope, who was a carpenter. Our father’s paternal great grandmother, Emma Pope, attended Spelman College in Atlanta, but left college before graduation to get married.

Our maternal grandmother, Esther Ward Barnett, was the first woman newspaper photographer in the Bahamas. She took photographs of Queen Elizabeth and other dignitaries, but no one knows her name.

We all have hidden figures in our lives, and we must tell their stories and let the world know their names!

Brooke and Breanna Bennett are nine-year- old gifted twins in Fourth Grade. Their father, Bradley Bennett, was the inaugural executive editor of the South Florida Times, and their mother, Adeyela Albury Bennett, is a board member of the Florida Association for the Gifted. The family returned to America in 2015 after living in Dubai for five years.