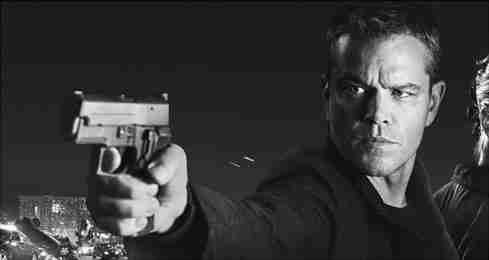 In the latest film in the Bourne Identity franchise, Jason Bourne, our favorite American spy, is still trying to find his identity. In the previous films (Bourne Identity, Bourne Supremacy, Bourne Ultimatum) that starred Matt Damon as the titular character, Jason has a self-awakening and realizes that there is an entire part of his life that he’s missing. Never fear, he finally remembers all in Ultimatum. In between Ultimatum and Jason Bourne there was Bourne Legacy, a lousy movie that starred Jeremy Renner as another beefed up assassin like Bourne.

In fact, none of the Bourne films is great as they should be. (I actually fell asleep watching Ultimatum.) It’s a good thing Damon and the franchise’s long-time writer/director, Paul Greengrass (with writing help from Christopher Rouse and Robert Ludlam), decided to make up for that with Jason Bourne; which we’ll call Bourne 5.

Bourne 5 is the best film of the franchise. When the film starts, we find that Jason is engaged in street fighting for money and Nicky Parsons (Julia Stiles), one of his biggest allies, has decided to expose the recent black ops programs employed by the CIA and the illegal ways they have gone about running them. She enlists Jason’s help and that is when Heather Lee (Alicia Vikander), the scary-good head of the CIA’s cyber division, steps in to neutralize the situation and stop the exposition. The film also centers on a little more of Jason’s history.

(Spoiler alert!) Jason’s real name is David Webb. His father, Richard Webb (Gregg Henry), started the Treadstone program that created Jason Bourne. Since its inception, Treadstone has gone through various incarnations that include the Blackbriar fiasco of Bourne Ultimatum to the Iron Hand program of Bourne 5. Iron Hand’s assassins include subjects who were victims of the Blackbriar leak that saw their missions compromised. The CIA is trying to keep history from repeating itself.

But Bourne 5 isn’t all Jason Bourne. It’s also about the current events of the day. There is a fiery riot in front of the Greek Parliament that is indicative of protests that have developed around the world. There is a shooting in a public place that causes mass hysteria. There’s even a government scheme to make an Iraqi nationalist the fall guy as a cover-up for an illegal action. Bourne 5 also addresses the long-standing na- tional security argument of personal rights vs. public safety. Tommy Lee Jones stars as current CIA director Robert Dewey, who is trying to strong arm Aaron Kalloor (Riz Ahmed), the CEO of Deep Dream Corporation. Deep Dream is a social media giant that is delving into creating a search engine that is free of government interference; i.e., the user does not have to worry about being monitored.

Aaron’s philosophy is “privacy is freedom,” but Dewey is totally against it because it could open a back door for terror cells to recruit more cells undetected. It’s Dewey’s way of stopping Aaron and Bourne that causes him to be the villain. His by-any-means-necessary approach is deadly.

Conversely, there is Lee and her skill of finding targets using basic technology. The tactics em- ployed in this film to quickly and efficiently locate Bourne (and to be rid of him) are pretty top notch.

What’s also top notch are the action se- quences. Without giving too much of the film away, audiences can look forward to a heart pounding motorcycle chase, Damon being in good fighting shape, and a face-covering car chase that involves a SWAT tankard and a Dodge Charger (aka beefed up commercial).

In essence, the bad taste Bourne Legacy left in the mouths of its audience has been sweetened by Bourne 5. It has all the government intrigue and conspiracy that we love in thrillers. It’s also got enough action to keep this writer awake. And, it chooses not to pick a side between privacy and national security. Hopefully, in Bourne 6 (because the success of this Bourne means there will be another), the filmmakers will further explore that argument. In the meantime, Bourne 5 is a must watch.