The Magnificent Seven is a magnificent remake of old movie 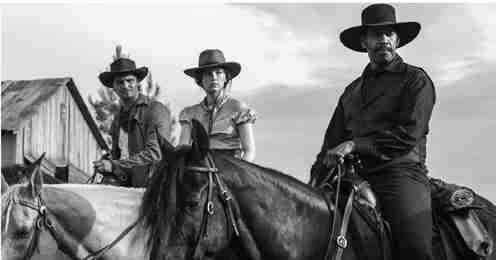 Since The Fast & the Furious made it okay and bankable to have a multi-racial cast, it’s been a nicely growing trend to have people of all colors represented in a film. Even though this is a welcomed change in the film industry, we’ve still got a lot further to go when it comes to diversity. Still, it’s nice to see filmmakers taking that step forward in the right direction. Case in point: The Magnificent Seven.

In the 1960 Magnificent Seven that starred Yul Brynner, Steve McQueen, Eli Wallach, and Charles Bronson, there was quite a bit of diversity for a film of that time. In the Magnificent Seven remake (out September 23), director Antoine Fuqua assembles a team of extraordinary men to help the town of Rose Creek win back their land from Big Bad Robber Baron/Industrialist Bartholomew Bogue (played by Peter Sarsgaard). Bogue has decided that the farmers of Rose Creek don’t know how to properly mine or protect their gold mines. So, he takes it all from them.

But, that’s not all that he takes. To keep Rose Creek in line, he kills off all the men who are brave enough to stand up to him; thus, crippling any rebellious uprising. It’s a strategy that has worked for many tyrants through the centuries. One of the brave men that Bogue eliminates is Matthew Cullen (Matt Bomer), whose widow Emma (Haley Bennett) takes matters into her own hands and hires a war- rant officer from Kansas named Sam Chisolm (Denzel Washington), to help the town take back what belongs to them. I like female characters with guts.

I also like that, at 61 years old, Washington is still going strong in action films. He’s the John Wayne of this time. Chisolm is a great character to root for. He organizes a team of people who don’t know each other at first, but come together to risk their lives for a cause that’s not their own.

What I like about screenwriters’ Richard Wenk and Nic PIzzolatto’s (based on the screenplays by Akira Kurosawa, Shinobu Hashimoto, and Hideo Oguni) script is that nothing is expected. Despite this being a typical western, there’s no Hollywood glam. Everyone wears the same dust on their faces from being in the desert.

Story wise, the film has a great design. The seven fighters don’t just fight. They arm the town to fight for themselves. Kind of like the “teach a man to fish” theory. That way, the next industrialist thief will think twice before messing with Rose Creek. Not to mention, Chisolm is the gel that keeps it all together, from the fighters to the people of Rose Creek who would, otherwise, shun them. Likewise, the town of Rose Creek gets a nice lesson in tolerance. Now, if that’s not an indication of a well-written script, I’m not sure what is.

In the hands of Fuqua, this multi-racial cast brings humor, humanity, and acceptance to a film that could have been boring or run-of-the-mill with blood and guts all over the screen and death-defying stunts that don’t make any kind of sense. Instead, he lets the story be what it is and doesn’t go for convention, which makes the film feel original. Films like Magnificent Seven are rare. The title is indicative of the film; in that it’s a magnificent work of art by Fuqua and the hard-working actors who gave it their all. And, it’s a thrill ride for the audience that never sacrifices anything for glamour.

Although, this is definitely a dude film (no one kissed at the end and the prominent female protagonist shows way too much cleavage for 1879), but it’s a really good one that anyone can enjoy. You won’t be disappointed.