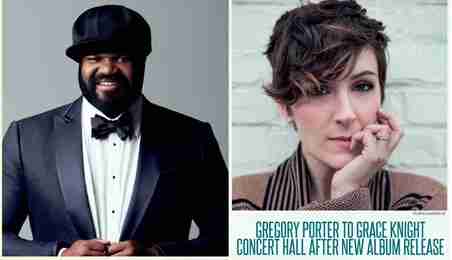 The first time I heard his voice, I was sitting in the hotel lobby of a trendy, boutique hotel in the heart of Lisbon.

I stopped the conversation with my girlfriends mid-sentence. “Who is that?” I inquired about the music being piped into the bar area. One-by-one they shrugged their shoulders. “And who is Laura,” I persisted.

I finally was successful in getting the attention of the barmaid who also didn’t know, but who was determined to find out. Ten minutes later he was back with an announcement: “It’s Gregory Porter.”

The minute I set foot on U.S. soil for a visit, I found Porter’s album, and bought a record player to go with it so I could hear that scratchy, authentic sound that one can only get from a record player. I was hooked.

This weekend South Floridians are in for a treat. That beautiful voice will belt out lyrics that remind you of old loved ones, infatuations and new loves as part of the 10th anniversary season of Adrienne Arsht Center for the Performing Arts’ Jazz Roots. Opening for the two-time Grammy winner will be Sara Gazarek, described by The Los Angeles Times as “one of the next important jazz singers.” The perform takes place at 8 p.m. Friday, March 2, at the John S. and James L. Knight Concert Hall.

Porter, a jazz, soul and gospel singer as well as songwriter and actor, won his first Grammy for Best Jazz Vocal Album for his 2013 debut album “Blue Note. The second Grammy was won in the same category for 2017’s “Take Me To the Alley.”

Late last year, Porter released his latest album, the much acclaimed “Nat King Cole and Me,” recorded with the London Studio Orchestra.

It’s a natural that Porter should name his latest album after the master Nat King Cole. Porter has been a fan since growing up in Bakersfield, California, with his mother, who often listened to the crooner.

In 2013, Porter told NPR’s All Things Considered about his love for Cole: “My father wasn’t raising me and I was listening to these words: ‘Pick yourself up. Dust yourself off. Start all over again. You’ll be a man someday.’ Nat King Cole’s lyrics were speaking to me, almost like fatherly advice, when I was listening to him alongside the console stereo player.”

He said recently of the new album, “It’s only natural that I go to the root of my inspiration and where I come from. And that root would be my mother and gospel music and Nat King Cole.”

Porter’s opening act, Sara Gazarek has been called “an accomplished scat improviser who exudes an engaging blend of confidence and cheer.”

For more information or tickets, contact the Arsht Center Box Office at 305-949-6722 or purchase online at arshtcenter.org/jazz.

Next post Eight festivals perfect for a girl's trip