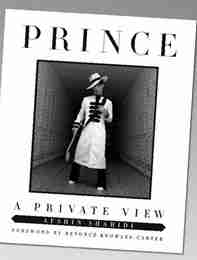 Prince photographed by Afshin Shahidi, who has released a book that includes 250 photos of the iconic musician.

NEW YORK (AP) – No assistants. No wardrobe or makeup people. No lighting technicians.

That’s how Afshin Shahidi spent his most cherished moments with Prince over nearly a decade as his go-to photographer, and he included many of their more intimate encounters among 250 photos in his recent book, “Prince: A Private View.”

Shahidi, also known as “black-ish” and “grownish” actress Yara Shahidi’s dad, is a Minnesota son like the superstar. He sheds light only he could provide on Prince, who died in 2016 of an accidental drug overdose.

There was the time Prince made him tea after a photo session and the two sat and talked about Rembrandt. There was a goofy side, too, with Prince clowning in an empty airport hallway, then clicking into his trademark deadpan when outsiders materialized.

While much of Shahidi’s work captured Prince onstage or was intended for official use in tour books or fodder for his fans, it’s the quieter times that sustain the 48-year-old Shahidi.

A conversation with Afshin Shahidi:

AP: You grew up in Minneapolis and were still a kid when Prince hit it big. What was running through your mind when you first met him in person?

Shahidi: I was in junior high and high school when I became aware of Prince and he was a big departure from the kind of music that I was listening to and the things I was into. He was this gender-bending phenom who could play all these instruments. I was always a fan, but I wasn’t a hardcore fan who would go to every show and knew every fact, so I jumped at the opportunity to meet him in `93.

I was star struck. It was the era when he had “slave” written across his face and everything about him was mysterious and amazing to me. I had moved back to Minneapolis after finishing college and I was trying to get into the film business. I was 23 and got a page asking for a film loader to work on a music video and they wouldn’t say who it was for. I didn’t know how to load film, but I thought I had a few days to learn, so I said, yeah, I can do it and then they said, well we need you right now and it’s in Chanhassen. That’s where Paisley Park is so I knew it had to be for Prince. I said, OK, I’m on my way.

AP: Was it difficult to gain his trust?

Shahidi: It was a very organic process. We built a mutual trust. He was very guarded and he was also very guarded with his image. To break through that and to then be able to capture a more authentic, less-posed Prince, where I could be in a room with him and he’s not on for the camera was pretty special and it took a little bit of time. Being on the road with someone for months at a time, you decide you really like someone a lot or you don’t like them at all.

AP: He kept a photo of Yara on his desk at Paisley Park.

Shahidi: I didn’t really know about it until after he had passed and somebody messaged me about it. It still brings tears.

AP: How did you steal all those unguarded moments?

Shahidi: I tried to blend in. It was important for me to try and capture those. We would just be hanging out and I would pick up my camera and shoot. I think he enjoyed looking at them.

AP: What do you think Prince got out of your friendship, not only with you but your wife and kids?

Shahidi: I think normalcy. We were just a normal Minnesota family. He enjoyed children. He liked their energy and creativity. That would put a smile on his face.

There’s a lot that still makes me sad about his passing. He’s one of the first friends that I’ve lost. He exercised regularly, he ate healthy. I never saw him abuse anything, not even alcohol. To me it was a big shock. I had hopes that Prince would honor me by coming to my funeral, not the other way around.