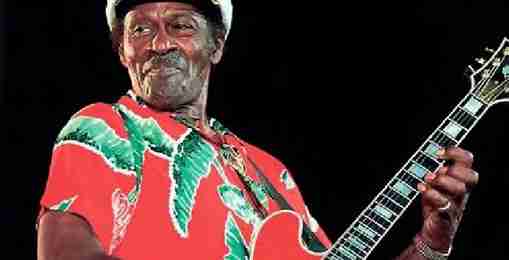 NEW YORK (AP) — Chuck Berry, rock ‘n’ roll’s founding guitar hero and storyteller who defined the music’s joy and rebellion in such classics as “Johnny B. Goode,” ”Sweet Little Sixteen” and “Roll Over Beethoven,” died Saturday at his home west of St. Louis. He was 90.

Berry’s death came just weeks before the debut single off his first new studio album in nearly four decades was scheduled to go on sale, a friend of the rock ‘n’ roll legend said. His last new studio album, “Rock It,” was released in 1979.

Joe Edwards, the owner of the Blueberry Hill club in St. Louis where Berry performed regularly, said the tracks he has heard off the upcoming album, titled “CHUCK,” are “sensational.”

“What a genius,” Edwards said Saturday. “I just miss him like crazy. I miss his laugh.”

Berry’s core repertoire was some three dozen songs, his influence incalculable, from the Beatles and the Rolling Stones to virtually any group from garage band to arena act that called itself rock ‘n roll.

“Anybody who’s picked up a guitar has been influenced by him,” said rock hall CEO Greg Harris, who remembers playing the opening riff of “Johnny B. Goode”

over and over again as budding teen guitarist.

In addition to Berry’s notes, Harris said his lyrics spoke about teenage life and social issues in the 1950s.

“It’s why when we think of the greats and the forefathers, his name is right there,” Harris said.

Berry drew praise from all corners after his death including tweets and posts from former Presidents Barack Obama and Bill Clinton, Mick Jagger, Bruce Springsteen, The Jacksons, Lenny Kravitz and more.

“I am so sad to hear of Chuck Berry’s passing. I want to thank him for all the inspirational music he gave to us. He lit up our teenage years, and blew life into our dreams of being musicians and performers. His lyrics shone above others and threw a strange light on the American dream. Chuck, you were amazing, and your music is engraved inside us forever,” said Mick Jagger of The Rolling Stones, in a series of posts via Twitter.

“One of my big lights has gone out!” said Keith Richards of The Rolling Stones, in a statement.

“I am so sad to hear about Chuck Berry passing – a big inspiration! He will be missed by everyone who loves Rock ‘n Roll. Love & Mercy,” tweeted Brian Wilson of The Beach Boys.

“Chuck Berry’s life was a treasure and a triumph, and he’ll never be forgotten,” said former President Clinton.

“You’ll always be the Father of Rock & Roll to us, Chuck. Our thoughts are with the Berry family. #Legend #ChuckBerry” tweeted the St. Louis Cardinals baseball team.

“It started with Chuck Berry. The 1st album I ever bought was Chuck’s ‘Live at the Tivoli’ and I was never the same. He was more than a legend, he was a founding father. You can hear his influence in every rock & roll band from my generation on. I’ve been performing his ‘Sweet Little Rock & Roller’ since 1974 and tonight, when my band and I perform it at Caesars Palace’s Colosseum, it’ll be for Chuck Berry – your sound lives on,” said Rod Stewart in a statement Saturday.

“Chuck Berry merged blues & swing into the phenomenon of early rock’n’roll. In music, he cast one of the longest shadows.

Thank You Chuck,” tweeted The Jacksons.

On his instagram, rocker Lenny Kravitz posted,”Hail Hail Chuck Berry!!! None of us would have been here without you.
Rock on brother!

Berry was the first artist in the inaugural 1986 class to go into the rock hall, and he closed out its concert in 1995 to celebrate the building’s opening in Cleveland. The Rolling Stones’ Keith Richards said at Berry’s induction ceremony that Berry was the one who started it all.

Charles Edward Anderson Berry was born in St. Louis on Oct. 18, 1926. As a child he practiced a bent-leg stride that enabled him to slip under tables, a prelude to the duck walk of his adult years.

His mother, like Johnny B. Goode’s, told him he would make it, and make it big.

A fan of blues, swing and boogie woogie, Berry studied the very mechanics of music and how it was transmitted. As a teenager, he loved to take radios apart and put them back together.

Using a Nick Manoloff guitar chord book, he learned how to play the hits of the time. He was fascinated by chord progressions and rhythms, discovering that many songs borrowed heavily from the Gershwins’ “I Got Rhythm.”

He began his musical career at age 15 when he went on stage at a high school review to do his own version of Jay McShann’s “Confessin’ the Blues.” Berry would never forget the ovation he received, saying it impacted the way he programmed and performed his songs for years to come.

Well before the rise of Bob Dylan, Berry wedded social commentary to the beat and rush of popular music.

“He was singing good lyrics, and intelligent lyrics, in the ’50s when people were singing, “Oh, baby, I love you so,'” John Lennon once observed.

In his late 20s before his first major hit, Berry crafted lyrics that spoke to the teenagers of the day and remained fresh decades later.

In 1944, when a joy-riding trip to Kansas City turned into a crime spree involving armed robberies and car theft. Berry served three years of a 10year sentence at a reformatory.

A year after his October 1947 release, Berry met and married Themetta Suggs, who stayed by his side despite some of his well-publicized indiscretions. They had four children together.

Berry signed with Chicago’s Chess Records in 1955 and appeared in a dozen movies, doing his distinctive bent-legged “duck-walk” in several teen exploitation flicks of the ’50s.

He had a few more run-ins with the law throughout his life including being found guilty of violating the Mann Act by transporting a minor across state lines for immoral purposes in the 1960s; receiving tax charges in the 1970s; and being sued by female employees for allegedly videotaping them in the bathroom in the 1980s.

Yet, his talent was undeniable and when NASA launched the unmanned Voyager I in 1977, an album was stored on the craft that would explain music on Earth to extraterrestrials. The one rock song included was “Johnny B. Goode.”

Louis’ Fox Theatre to celebrate Berry’s 60th birthday, featured Eric Clapton, Little Richard and Jerry Lee Lewis, who recalled being told by his own mother that Berry, not he, was the true king of rock ‘n’ roll.

In a recent statement, Berry’s family said completing his forthcoming album, CHUCK, gave Berry “a great sense of joy and satisfaction” and they will follow through with release plans.

This article was compiled using reports from The Associated Press written by Hillel Italie, Jim Suhr and Josh Funk.