Tired of typecasting, actor-turned-movie producer makes his own 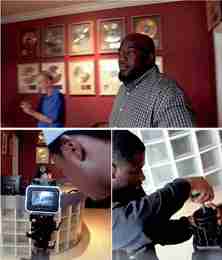 Listening to Sam Gbadebo is reminiscent of another filmmaker who, more than 20 years ago, made his first film with credit cards and money provided by his grandmother. That filmmaker went on to become one of the nation’s most celebrated black directors, also known as Spike Lee.

As the manager of the popular Black Violin musical duo, Gbadebo made numerous connections that he thought would translate to an easy entrance into the film making industry. Not so; however, the obstacles and inability to secure the break he anticipated fueled his faith and resulted in the production of his first feature length film, My Breakthrough, screening on June 3 at Miami Carol City Senior High in Miami Gardens.

He said it took two years to write the script that started out as a stage play. Feedback from friends that the story, which is steeped in faith, hope and perseverance, was more suited for a movie prompted him to convert it to a script for a short,then a feature length film. Gbadebo serves as the executive producer. The movie was directed by Granville Bailey.

An actor, Gbadebo said he grew tired of being type- cast as a gangster and being told by the same casting director that he was “too this” or “too that.” He said he always wanted to make a movie, so he “decided to pursue my dream.” Leaving his future up to someone else, he said, was out of the question. Gbadebo said the process to make My Breakthrough felt more like an “out of body experience.” It also served as confirmation for him that “when man says no, God says yes,” he shared during a telephone interview.

The film making process was smooth, he said, be- cause he sought to make the set as peaceful and inclusive as possible. The movie was made on a budget of approximately $30,000, which included funding as well as in-kind services.

His goal is to have the movie picked up by an online distribution company and he hopes viewers at the June 3 screening will spread the word.

Previous post X-MEN: APOCALYPSE movie is too long and too busy