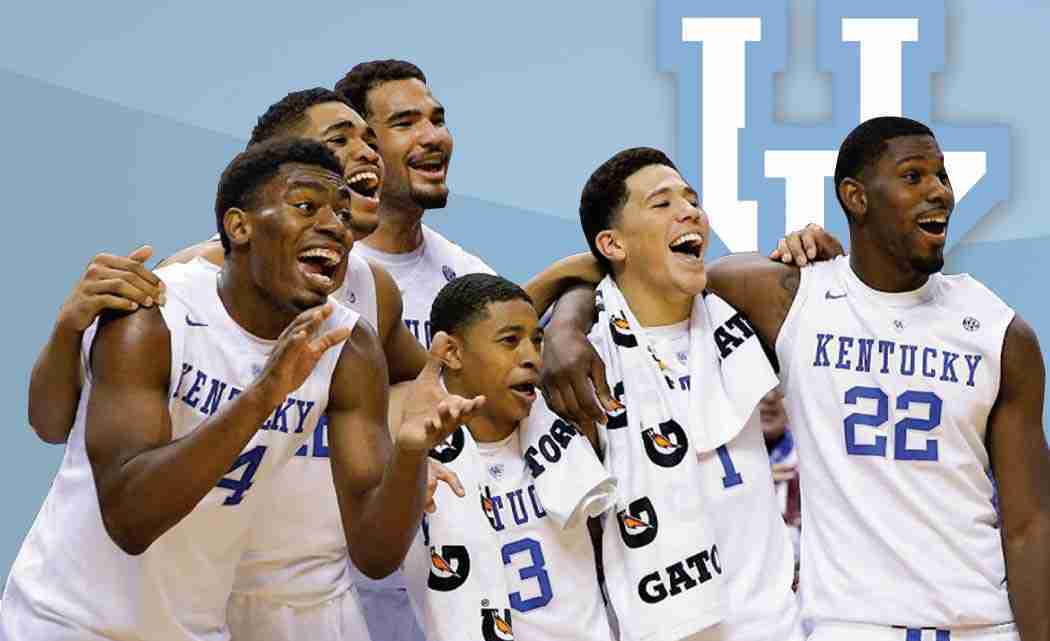 So here is the NCAA Tournament bracket. Questions, anyone?

Matter of fact, here are 10, before and after they get started Tuesday in Dayton.

No. 1. Where to start is easy. Can Kentucky do it?

The sun set in the West on Sunday night and the Wildcats got the top seed in the bracket, not necessarily in order of certainty. One could make the case the next three weeks are more of a coronation than a tournament, but the 34-0 Wildcats have to finish the job, which is why they sent student managers to cut down the nets after the SEC championship. “From here on out,” Willie Cauley-Stein noted Sunday, “you’re 0-0.”

Eighteen teams have taken perfect records into the tournament. Seven won championships, five more went to the Final Four. The matter was put to two men who know something about the pursuit.

Quinn Buckner — from the last unbeaten champions, Indiana 1976 — sees a different situation for the Wildcats than his Hoosiers, who were made up largely of seniors who had gone to the Final Four as freshmen and experienced a crushing regional final loss to Kentucky as juniors, when they were also unbeaten.

“By the time you get there in 1976 and you know it’s your last shot, you’re a little bit more of a man,” Buckner said. “You’ve got seniors who are a little older and wiser and do things with a better sense of purpose. That doesn’t happen anymore. That’s the uniqueness of what Kentucky is doing.

“I’d be surprised if things didn’t work out for them, because they defend very well.”

Same question to Larry Bird, whose 1979 Indiana Sycamores were perfect until the championship game, where Michigan State and Magic Johnson were waiting. That is the last unbeaten team to get so close.

“It’s so hard when you get in the tournament because every team knows exactly what you’re going to do,” Bird said. “You get down and you get a little pressure on you, you never know how kids are going to react. Do I expect them to get beat? No. But there’s a chance they can get beat.” 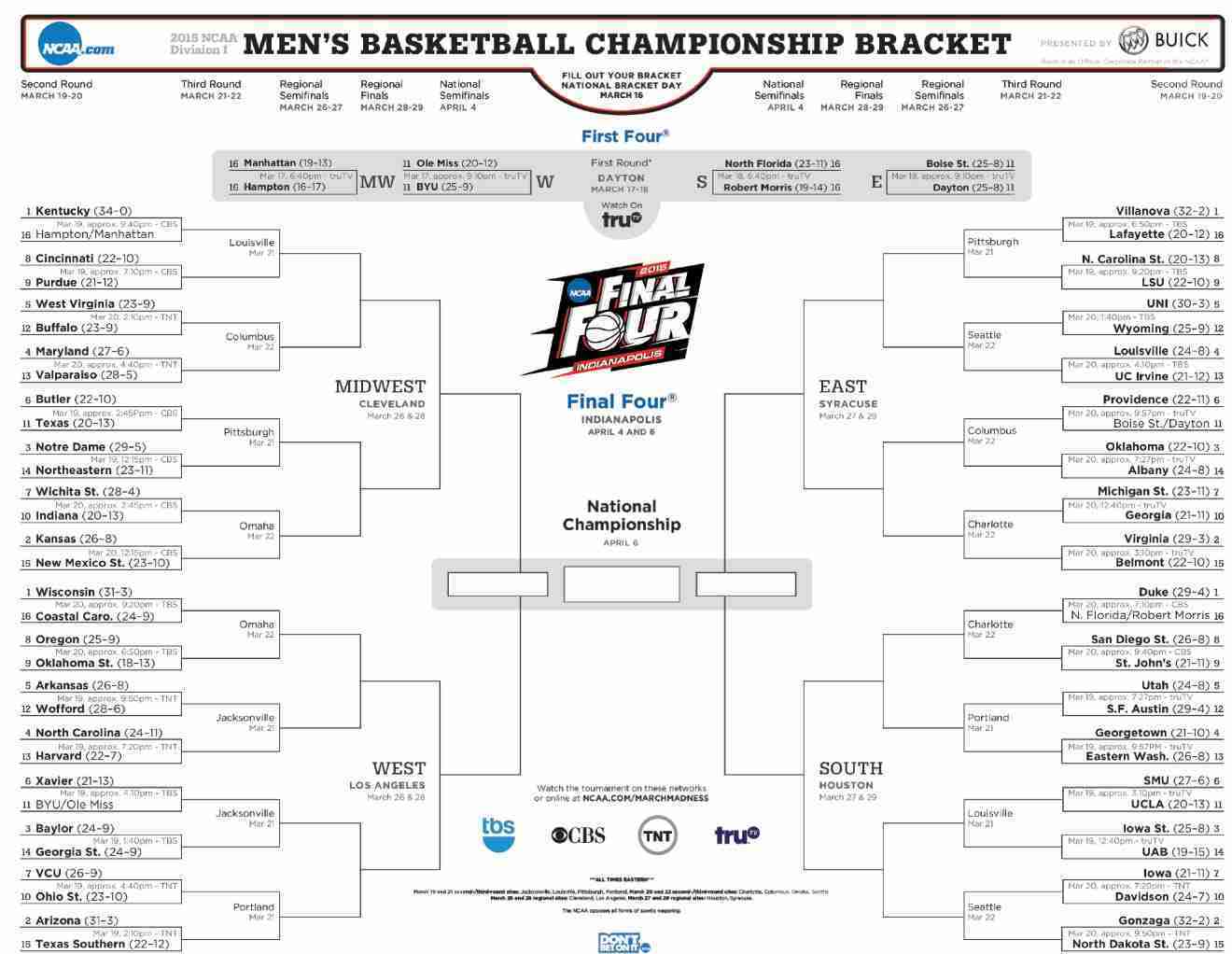 Bird knows the pain of falling just short. “It still bothers me. I didn’t play well. I’d like to have one more shot at that.”

As for Buckner, one wonders if it will be a bit disappointing, should Kentucky evict the Hoosiers as the last perfect team.

“The only thing that goes away is the word ‘last.’ That’s it,” Buckner said. “It’s inevitable [someone do it] because life changes. I didn’t think it’d be this long. When you’re saying 39 years, it means I’ve been here a day or two. That’s why I don’t like reunions.”

No. 2 Now that we know Kentucky’s route, what does it look like?

Well, not the express lane with no traffic. But not exactly the Pasadena Freeway at 5 o’clock, either.

First up, if Manhattan wins its First Four game, would be Jaspers coach Steve Masiello, who was a Kentucky walk-on. Then, either Purdue and a couple of 7-footers, or Cincinnati with acting coach Larry Davis, as Mick Cronin recuperates from an aneurysm.

Then things would get a little trickier. Next, if the seeds hold, would be Maryland, who finished second in the Big Ten. Then maybe Kansas or Notre Dame. A collision between the Wildcat defense and the Irish shooting would be intriguing. That opens the door to the Final Four.

No matter who they play, the Wildcats shouldn’t have many travel worries. It’s 70 miles to their first and second rounds at Louisville, a tad more than five hours of Interstate driving to the Midwest Regional in Cleveland, and just under three hours to the Final Four in Indianapolis. To get the job done Kentucky will need offense, defense and about 50 gallons of gas.

No. 3. Any relief in sight for the ACC drought?

The league hasn’t had a Final Four team since Duke’s 2010 national championship, the longest dry spell since 1961. But maybe it’ll rain soon, since five of the top 16 seeds in the field are from the conference.

No. 4. Which No. 1 seed was sent down the road with the worst potholes?

Step forward, Wisconsin Badgers. You’ve got surging North Carolina, highly dangerous Baylor and almost-No. 1-seed Arizona in your way. Could be worse. You could be No. 2 seed in Kentucky’s region like everyone predicted.

The Broncos are special. They get to play the only true road game in the entire NCAA tournament when they go to Dayton for one of the First Four games. The possibility of Dayton being at home in the First Four has been kicked round for years, and the committee always said if that’s the way it broke, that’s the way it broke. But who knew they meant it?

Dayton has only seven scholarship players and nobody taller than 6-6. The Flyers are also 16-0 at home. Welcome to the First Four, Boise State.

No. 6. Anyone know the road to some possible first-round upsets?

Go to Portland, and ask directions to the arena. There you will find Eastern Washington, who won at Indiana and has the nation’s leading scorer in Tyler Harvey, taking dead aim at Georgetown. And Stephen F. Austin, winner of 28 of its past 29, planning on making trouble for Utah.

Since the 5-12 seed games are usually one big pool of quicksand for the favorites, that’s always a good place to look. Stephen F. Austin-Utah is one. Another is West Virginia-Buffalo. Consider two halftime scores from earlier in the season: Buffalo 38, Kentucky 33, and Buffalo 27, Wisconsin 26. The Bulls lost by 19 and 12, but you get the idea. Twenty-five years after Duke freshman guard Bobby Hurley was tormented by UNLV in the 103-73 championship game nightmare, he is back coaching Buffalo to its first NCAA tournament.

Also, UCLA is the 13-loss team that once dropped five games in a row and infamously scored seven points in the first half against Kentucky. More than a few people looked at the letters U-C-L-A and saw the letters N-I-T. But the Bruins landed a No. 11 seed, and can quell the critical noise in a hurry with a win against No. 6-seed SMU and former Westwood employee Larry Brown. It was 35 years ago that Brown coached the Bruins to the national championship game.

Not that anyone will be predicting an upset, but it’ll be interesting to see what Belmont’s band of shooters do against Virginia’s suddenly wobbly defense.

No. 7. How about some juicy second-round possibilities?

Start in the Midwest, and a potential in-state scrap between Wichita State and Kansas. Go South, where it could be Duke vs. San Diego State. An offense that scores 80.6 points a game against a defense that allows 53.1.

But the best regional to watch in the second round is the East. No. 1 seed Villanova would have true danger against NC State, a talented bunch that has beaten Duke, Louisville and Notre Dame. Northern Iowa is 30-3 and considered this year’s prime candidate for mid-major darling, and we could find that out in a hurry if the Panthers play Louisville.

A Virginia-Michigan State game would be long on muscle and grit, short on aesthetics. The Spartans might want to make sure they dispose of the Cavaliers in 40 minutes. Michigan State just took its fifth overtime loss of the season.

The numerical case against Murray State might have been compelling but it has to be hard for anyone to go 27-5, lose its conference championship game by one point on a last-second 3-pointer, and go uninvited.

Colorado State with a 27-6 record and No. 30 RPI probably is a tad tiffed as well.

No. 9 Why are they singing Back Home Again in Indiana in the Midwest region?

The Hoosier State put five schools in the field. All five are in the Midwest Regional. Butler and Notre Dame might run into one another in the second round. Indian, Purdue and Valparaiso are all there, too.

• Gonzaga and Notre Dame want to change the karma. The Zags have fallen in the round of 32 in five consecutive tournaments. Notre Dame is 2-6 in the tournament since its last Sweet 16 in 2003, and five of the six losses came against lower seeds.

• Northern Florida should have an entire state behind it for the First Four game against Robert Morris. The Ospreys are the only team in the field from Florida.

• Georgia State is in the bracket, which means Kevin Ware is back in the tournament, two years after he shattered his leg as a Louisville Cardinal in a regional final, to a loud nationwide gasp. Ware scored 18 of his team’s 38 points in Sunday’s Sun Belt championship.

• Iowa State bears watching as a No. 3 seed in the South Regional. First, the Cyclones have rallied from double-digit deficits to win five consecutive games. Secondly, guard Monte’ Morris just played 110 minutes in the Big 12 tournament against Texas, Oklahoma and Kansas without a turnover.

• UAB is in the field by virtue of winning the Conference USA tournament without a first- or second team all-conference player.

• Most heart-wrenching story to watch in the first round, hands down: The Albany Great Danes with Peter Hooley. He just hit the winning shot in the conference tournament to get Albany into the field, after missing eight games earlier in the season to go back to Australia to be with his dying mother. Sue Hooley passed away in January. “When you’ve got angels watching,” he said after his winning shot, “anything is possible.”

• This is the 30th anniversary of Villanova’s famous upset of mighty and supposedly unbeatable Georgetown for the 1985 national championship. Just a thought, should the Wildcats ever get to Kentucky. The next three weeks are all about Kentucky, right?