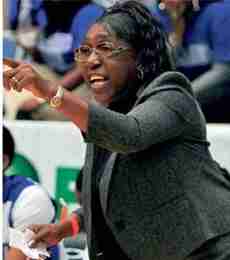 Gatorade awarded Pinder during the Dillard’s high school sports banquet yesterday. Pinder will have a red carpet moment again in Los Angeles when she is recognized at the Gatorade Athlete of the Year Awards in July. The event brings out some of the most iconic figures in sports.

Pinder is noted as the high school In 2017, she was the winner of the 2017 Morgan Wooten Award for Lifetime Achievement in Coaching High School Basketball.

Pinder was named to Hall of Fame of the National High School Athletic Coaches Association (NHSACA) in 2014.

During her tenure as head coach for 40 years, Marcia has led her teams to nine state championships and 900+ wins. Her leadership extends far beyond the court. Marcia has had a large impact on her athletes by taking them under her wing, buying players shoes when they cannot afford their own, driving players home from practice if they have no form of transportation. Pinder once “adopted” a kid that was moving between foster homes—and helped her receive an academic and athletic scholarship.

Troy McAllister, football at Phillip’s High School in Chicago, is the other winner of the award.

The Gatorade Coaching Excellence Award was established in 2016 to honor the best and most dedicated high school coaches across the country. Every athlete, professional or amateur has had a coach inspire them along the way, and it’s Gatorade’s aim to celebrate the truly remarkable impact that coaches have on high school athletes. Each year, Gatorade honors two coaches who have made a particularly impressive positive impact on the lives of their student-athletes and whose commitment to the coaching profession goes far beyond the game.