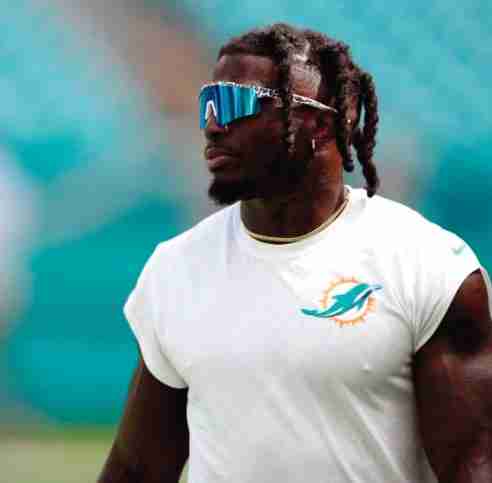 Miami Gardens, Fla. (AP) – Tyreek Hill’s success with Kansas City made it easy to imagine the impact he’d make on this new team.

Hill made his Dolphins debut in Sunday’s 20-7 win over the New England Patriots, and his 94 receiving yards was the most by a Miami newcomer in Week 1 since running back Jim Kiick in 1970.

The Dolphins traded a package of draft picks to Kansas City for Hill and gave him a $120 million, four-year contract extension that made him one of the highest-paid NFL receivers ever.

“It feels awesome having someone like Tyreek,” quarterback Tua Tagovailoa said. “I’ll keep saying this, the dude is a cheat code. It’s not easy covering this guy when he’s motioning, running routes off of motions and doing his thing. I love it.” In five career games against New England, Hill has 32 receptions for 495 yards and five touchdowns.

Coach Mike McDaniel said the team always plans to involve Hill. He added that there were a couple plays against the Patriots that frustrated Hill because he wasn’t in the right place on the field when Tagovailoa threw the ball.

“I think each and every game we’ll do our best to feature him unless the defense has to fully commit to take him away,” McDaniel said, “which is good news for the Miami Dolphins because we have some other playmakers.”

Hill and Jaylen Waddle make up one of the fastest receiving duos in the league. Waddle showed his speed on a 42-yard touchdown catch against the Patriots, but more important, he showed he’s healthy. He missed the preseason with a quad injury.

The run game. The Patriots gained 78 yards on the ground to the Dolphins’ 65. Miami’s leading rusher was Chase Edmonds, who had 25 yards on 12 carries. McDaniel brought in Edmonds and Raheem Mostert in the offseason to make a difference in a run game that has struggled in recent years.

Kader Kohou. The rookie cornerback couldn’t have asked for a better debut. He had a pass breakup on fourth down in the fourth quarter that kept the Patriots from mounting a comeback. And when the defense went back on the field, he forced a fumble by Patriots receiver Nelson Agholor that was recovered by Jaelan Phillips.

Kohou became the first undrafted rookie to force a fumble in a Week 1 game since Giants defensive back Bruce Johnson did it in 2009 against Washington.

“The night I went undrafted, I just had a chip on my shoulder from then on,” Kohou said. “I always envisioned myself making plays.”

Noah Igbinoghene. The defensive back failed to show in the preseason that he could be a reliable option. He was inactive for Sunday’s game, and Kohou’s standout performance may have put him ahead of Igbinoghene on the depth chart.

Offensive lineman Austin Jackson suffered an ankle injury in the second quarter. McDaniel said the injury was serious enough for the team to “get more eyes on it.” Tight end Cethan Carter left the game in the second quarter with a head injury and is in the concussion protocol.

KEY NUMBERS 75-81. That’s the Dolphins’ all-time record in seasons playing under a new head coach. Miami has made the playoffs four times in such seasons. The last was in 2016 under Adam Gase.

Miami has a tough stretch over the next two weeks. The Dolphins play at Baltimore next week, then host Buffalo.

“Today, throughout the whole building guys were focused on getting better and improving before this Baltimore game,” McDaniel said, “because I can promise you Baltimore could care less about our happy feelings on Sunday.”