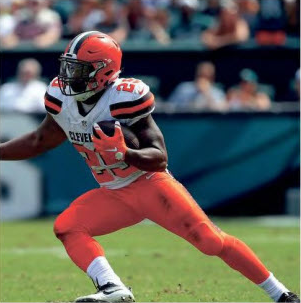 Photo courtesy of Factory of Sadness

Cleveland Browns running back Duke Johnson (29) reaches but cannot catch a pass during the second half of an NFL football game against the Kansas City Chiefs, Sunday, Nov. 4, 2018, in Cleveland. (AP Photo/David Richard) The Vikings, Broncos, Texans and Ravens being off in Week 10 means there are plenty of bye week players to replace in lineups.

You’ll be without the likes of Adam Thielen, Kirk Cousins, Phillip Lindsay, Emmanuel Sanders, DeAndre Hopkins and Deshaun Watson this week. Work the waiver wire aggressively and with a forward-looking focus.

DUKE JOHNSON JR., Browns (49.6 percent owned): He was cut in some very competitive leagues recently, but a coaching overhaul in Cleveland has led to Johnson quickly regaining fantasy relevance. Johnson caught nine passes for 78 yards on Sunday, and with the Browns lacking a quality second wideout he should remain in the flow going forward. Make him a top waiver priority or be willing to spend handsomely if your league uses a free agent acquisition budget. If you need RB help in a point-per-reception format, don’t hesitate to spend 50 to 60 percent of your budget.

MIKE DAVIS, Seahawks (18.5): He totaled 107 yards from scrimmage and caught seven passes on Sunday as Chris Carson could not make it out of the early stages of the game. Carson is already looking iffy this week with hip and groin problems and he has been a consistent injury concern. Davis is clearly preferred by the Seattle coaching staff over Rashaad Penny and faces the league’s worst run defense (the Rams) in Week 10.

JOSH ADAMS (3.0): We advised picking him up last week but he was only added in 2.5 percent of leagues. Many owners passed on him because Adams was on a bye week. Don’t overlook players who have byes, when you can get the jump on passive league mates. Adams may start for the Eagles coming off the bye.

MARQUES VALDES-SCANTLING (20.8): Not enough owners paid attention to injury news late last week, which indicated Geronimo Allison would likely be out with a groin injury, boosting Valdes-Scantling’s outlook again. Now Allison may be done for the season and Randall Cobb is oft-injured and only had 24 receiving yards last week. The rookie has either reached 100 yards or scored in his last four games and has quickly risen to fantasy WR3 status.

ADAM HUMPHRIES, Buccaneers (2.8): In the past, he had flashed some potential to be a decent fantasy player, then totally defied expectations in Week 9 with eight catches for 82 yards and two TD receptions. He used to be more of a Jameis Winston favorite, but Ryan Fitzpatrick can use him as a reliable option from the slot.

JOHN ROSS, Bengals (8.1): Ross has started to practice as he anticipates a potential return from a groin injury, and with A.J. Green possibly missing two games or more with a toe problem, Ross becomes a viable waiver target because of increased opportunity. Tyler Boyd may get extra defensive attention during Green’s absence, and Ross will likely be more targeted more frequently. His big-play promise is no secret to seasoned fantasy players.

C.J. UZOMAH, Bengals (18.2): He has dis appointed since becoming the clear No. 1 at his position in Cincinnati because of injuries, but Uzomah also still has some lingering appeal because of the Green injury. Andy Dalton will always consider his tight ends when inside the 10-yard line, and Uzomah has some TD potential while Green is out.

JEFF HEUERMAN, Broncos (7.9): Here’s a guy on a bye that you need to add now if TE is a desperation need. Heuerman immediately stepped into the Demaryius Thomas void left by the WR’s departure, catching 10 passes for 83 yards and a TD in a career performance. While his statistical ceiling may not be as high as those numbers indicate going forward, you have to take a waiver chance on the improved production possibly lasting more than one game.

LAMAR JACKSON, Ravens (1.5): This is a forward-looking waiver move where you possibly can get ahead of the rest of the league, as Baltimore is on a bye. Joe Flacco has four TD passes in his past five games and 398 passing yards with one TD and two interceptions in his last two outings. There could be a QB change coming in Baltimore soon. Jackson looked like an erratic passer in the preseason, but his rushing and playmaking skills point to some tantalizing fantasy possibilities if he gets inserted into the Ravens guiding role.